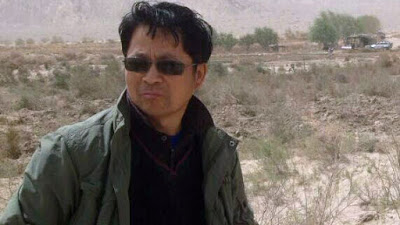 Huang Yunmin, an ex-judge-turned-legal advocate from the Xinjiang Uyghur Autonomous Region, was sentenced to 10 years in prison following a trial in September 2017. Kashgar Prefecture Intermediate People’s Court convicted him of “organizing, leading, and actively participating in a terrorist organization.” Police in Tumxuk (图木舒克), a city in Kashgar Prefecture, seized Huang in March 2017 when they suspected he planned to accompany farmers and ex-soldiers to Beijing to present grievances to central authorities during China’s major legislative sessions, specifically complaints against Tumxuk officials over perceived unjust court verdicts and rights violations. Huang’s prison sentence appears to be retaliation for not only this advocacy but for Huang’s online activities in the aftermath of the “July 5 Incident,” when ethnic unrest broke out in 2009 in Ürümqi, the capital city of Xinjiang.

Police initially put Huang under criminal detention on suspicion of “inciting ethnic hatred and discrimination,” days after he completed serving a five-day administrative detention. His family and legal counsel have never received police documentation of this punishment. It has remained unclear why Huang was detained and ultimately prosecuted on such serious charges, though his case likely reflects the high degree of political sensitivity in Xinjiang, as other civil society figures in the region had been given extraordinarily harsh punishments in prior years, such as professor Ilham Tohti (伊力哈木·土赫提) and activist Zhang Haitao (张海涛).

The alleged criminal acts by Huang Yunmin listed in the indictment, which was issued on July 24, 2017, involve his expression online. The indictment largely concerned Huang’s online activities between 2009 and 2017 related to information from the “July 5 Incident” in Ürümqi. Prosecutors accused Huang of “propagating violence and terror” and “extremist recordings,” scaling China’s “firewall” of cyber censorship and visiting foreign news sites antagonistic to China and downloading content, and also using his cell phone to share violent terrorist content.

Huang’s trial took place on September 19, 2017, during which he spoke strongly to his innocence in court while also pleading for leniency. In his defense statement, Huang’s lawyer argued that his client had actively combatted terrorism while serving as a judge in the past, and that his online behavior for which he had been indicted did not constitute crimes of terrorism. Huang’s 10-year sentence was not disclosed until Huang told his wife of the punishment at a detention center visit in November 2018, though she did not receive a copy of the verdict. During the visit, she witnessed mistreatment against him; Huang was brought out in handcuffs and leg shackles, and after he told his wife that he had been sentenced but was innocent of any crimes, guards manhandled Huang and dragged him away. Police told Huang’s wife that he had been beaten while incarcerated since he had refused to admit to crimes during interrogation, and they warned her not to disclose the abuse to others. The visit also prompted concerns about Huang’s health, as he was apparently suffering from stomach and breathing issues.

Born on July 1, 1958, Huang Yunmin is a former Chinese Communist Party member and soldier who, beginning in 1992, served as a judge on the Third Agricultural Army Brigade People’s Court in Tumxuk. He rose to head the court’s human resources department before being pushed out of his post in 2006; according to his family, higher-level officials pressured Huang to quit after he had criticized judicial bureaucracy and exposed court corruption. His brother, Huang Xiaomin (黄晓敏), has been a prominent and oft-persecuted activist based in Sichuan Province, and also faced deprived liberty during Huang Yunmin’s incarceration.

Huang began taking part in rights advocacy campaigns in 2008, when he helped to defend the health and economic rights of ex-soldiers who had formerly protected nuclear sites and conducted nuclear tests in Qinghai Province. In 2007, a notice issued by state ministries decreed that soldiers who had been involved in nuclear testing should be given medical exams and receive state benefits if they tested positive for health damages. In 2008, Huang saw the notice online and realized that local government officials had not implemented the measures, spurring him to lead a group of military veterans to petition the Ministry of Civil Affairs at Kashgar. Huang was detained in connection to this case in 2009, and accused of “possessing firearms,” but was released without trial.