Who Stands to Lose from China’s “Win-Win” Resolution? 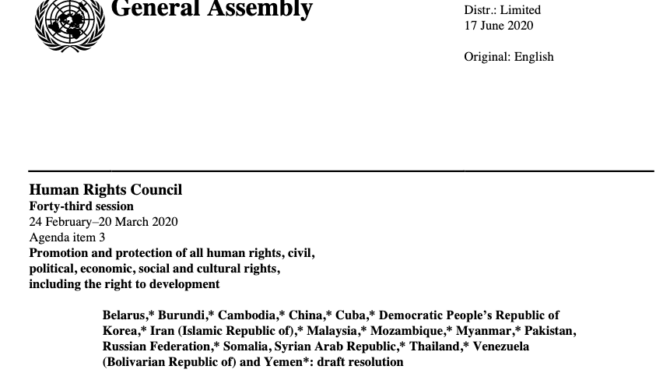 The world outside Geneva may have not noticed when a draft resolution initiated by China was passed at the UN Human Rights Council (HRC) on June 22. Too much is at stake to let this event slip off our radar screen. China scored this victory not only in the middle of a pandemic, the initial outbreak of which Chinese authorities tried to censor and cover up, but also amidst the unfolding human rights crisis in Xinjiang, and on the eve of its strong-armed imposition of a National Security Law upon the free people in Hong Kong.

How will this resolution weaken international human rights norms and institutions? Who stands to lose if independent experts and NGOs could no longer speak publicly on UN rights platforms about arbitrary detention of Chinese rights lawyers, or demand accountability for the atrocities in Xinjiang, or condemn the persecution to death in custody human rights defenders, for instance, the Nobel Peace Prize laureate Liu Xiaobo? What will remain of universal human rights now that China’s perspective is adopted in a HRC resolution?

For anyone unfamiliar with the Council’s patois, the China resolution may seem harmless. What could possibly go wrong with “mutually beneficial cooperation?” Yet, China has been a dishonest dealer peddling “government cooperation” with UN human rights operations. If anything, China is the master of non-cooperation when it comes to multilateral protection of human rights. In March 2019, the Chinese delegation in Geneva threatened many countries’ diplomats with “serious consequences” if they attended a side event on the human rights crisis in Xinjiang, sponsored by the US and a few EU countries.

In fact, four days after the China resolution’s adoption, fed up with China’s pathologically divisive behavior, more than 50 human rights experts joined a statement on June 26 expressing alarm, calling for “renewed attention” to and “decisive action” on human rights conditions in China, the crises in Xinjiang and Hong Kong. The statement was uncharacteristically blunt: China “almost always” rejects criticism of its rights record, ignores UN experts’ requests to visit the country, and punishes civil society activists who cooperate with the UN.

It is precisely such public criticisms that China’s resolution seeks to stop. For the current Chinese leaders, drawing public attention to the country’s human rights abuses makes them lose face, which hurts the country’s carefully crafted image of a “peacefully rising world power.” Instead of changing its own face-losing or shameful human rights abuses, however, the Chinese government undertook a cunning and aggressive campaign to change the UN human rights system, including, through this so-called “Win-Win” resolution, changing the working methods of the Council’s independent experts.

A major escalation of aggressiveness in China’s campaign to change the UN human rights system came after Xi Jinping took control over all levers of powers in the country. Xi made a speech at the UN in January 2017, vowing to “build a community of shared future for mankind” modelled on his “China dream” – rapid economic development under the rule of an authoritarian surveillance state. China has worked steadily over the past several years to enshrine Xi’s language in various HRC resolutions. The US withdrawal from the Council in 2018 suddenly gave China a welcome opportunity, allowing China to further flex its muscles in advancing its agenda.

What China peddles as “mutually beneficial cooperation” comes down to something simple: Chinese leaders want UN human rights agencies to engage only in quiet closed-door “negotiations” for “mutually beneficial” deals among governments. By silencing independent experts and gagging genuine NGOs, the Chinese government could then more aggressively use carrots and sticks to manipulate UN human rights platforms to its own advantage and further its own agenda. Obviously, such a “cooperation” offers a “win-win” for those governments that are averse to human rights criticisms and are dependent on or have been cozying up to China for trade and investment opportunities, or are simply afraid of retaliation from China.

As one can see, in this way, the new HRC resolution grants some international legitimacy for China’s official position that criticizing a country’s human rights record “interferes in its internal affairs.” This should obviously raise serious concerns. China has rushed to cash in when, on June 30, 27 governments spoke out in one voice, expressing serious concerns about the persecution of Uyghurs and threats to freedoms in Hong Kong; China shot back by enlisting 53 like-minded states to jointly reject the criticisms.

China’s “win-win” rhetoric in Geneva claims many victims. This resolution threatens to grant impunity to countries with terrible human rights records like China, while it demands silence on member states on the Council and the Council’s independent experts.

As the 3rd anniversary of Liu Xiaobo’s death approaches, I can’t help but think about the many dissidents, rights defenders, lawyers, and journalists, disappeared, tortured, jailed, or persecuted to death. If the HRC is restricted from publicly and independently taking action to prevent human rights abuses or demand accountability, they face an even dire future. After Liu Xiaobo’s detention in December 2008, the Chinese government was given quiet opportunities for cooperation with human rights experts through confidential communications. But China refused to honor its UN membership obligations to protect human rights by freeing the dissident writer and poet. So much for “cooperation” behind closed doors.

UN independent experts, operating without a police force, courts, or prisons – never gained access to visit Liu Xiaobo in prison, or succeeded in getting Chinese authorities to grant Liu medical bail for treatment as he was critically ill. If face-saving “negotiations,” which failed completely in this case, had been the only permissible working method then, HRC member states, experts, and NGOs would not have been able to demand Liu Xiaobo’s release and urge investigation of his death in public statements or speeches on the Council floor.

Given the Chinese government’s refusals to cooperate in protecting human rights on UN platforms in any meaningful way, speaking out publicly is not only necessary, but also one of the only remaining means for victims and their families to air their grievances and demand accountability. In China, the channels for victims to seek justice are systematically blocked. Authorities routinely force detainees to fire their own lawyers, punish families for speaking to the press or voicing their grievances on the Internet. For many victims, the HRC’s outspoken independent experts are their microphones for speaking truth to power. They stand to lose when these experts are silenced.

The case for supporting UN independent experts to speak out about abuses and name the abusers is made powerfully when, during the April 2014 Council session, the name of Chinese human rights defender Cao Shunli was read out loud, despite China’s objection, and when condemnations of the Chinese government’s deadly reprisals against her echoed in the chamber of the Council. During China’s 2nd Universal Periodic Review, some UN member states, with Cao’s case in mind, urged China to end reprisals against human rights defenders. The Committee against Torture raised Cao’s case during its 2015 review. Several UN Special Procedures made inquiries about her case and recommended Chinese officials take remedial actions. The UN Secretary General’s annual reports on reprisals against civil society highlighted and followed up on Cao’s case. If the China-sponsored resolution had been in place then and succeeded in silencing those voices, demands for justice for Cao Shunli would have been muzzled at the UN even after her death.

What happens next is up to civil society and UN member states. It’s worth noting that, China only got 23 “yes” votes, and 16 states including South Korea, India and Japan, voted “no” on the resolution, out of the 47 members of the Council. And some non-Western countries, such as Chile and Peru, abstained. It’s a narrow victory and likely rather costly for China in terms of promised paybacks.

Civil society cannot afford to leave matters of human rights in the hands of governments. The public can be moved by stories of human suffering to take action. Voters in democratic nations can push their governments to stand up to China’s assault on universal human rights.  A reversal of the unilateralist approach in the US would be helpful.

The biggest challenge is to elect more states that genuinely care about human rights to the Human Rights Council. Equally challenging is to get “an impartial and independent UN mechanism” established, to closely monitor, analyze and report annually on the human rights situation in China,” as the independent human rights experts urged in their June 26 joint statement. These experts are pushing back. They have put this solution on the table, which seemed unthinkable only weeks ago. That’s change.