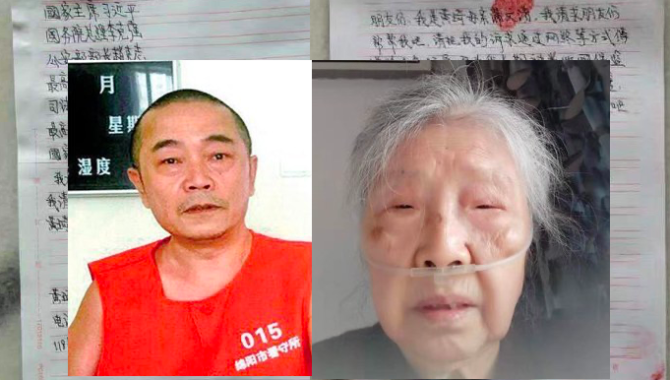 “My time in the world will not be long now,” wrote the 86-year-old mother of imprisoned Chinese citizen journalist and activist Huang Qi. “I am very sick now, very old, and my health is no good….We may not have a chance to meet.” Ms. Pu Wenqing, living alone, often bedridden, having suffered years’ harassment from Chinese police for campaigning for the release of her son Huang Qi, has only one wish: she’d like to see her son and know how he’s doing.

She last saw her son over three years ago, before Sichuan national security police seized Huang Qi from his home in November 2016. Huang, the founder and director of the 64 Tianwang Human Rights Center, has been prosecuted on charges of leaking “state secrets.” 64 Tianwang published a government document about a crackdown targeting the human rights center, which government officials later retroactively classified in order to arrest Huang.

In July 2019, a Sichuan court convicted Huang Qi and sentenced him to 12 years in prison, following a trial hearing in January during which authorities did not allow one of his lawyers to attend. He suffers from high blood pressure, heart disease, a chronic kidney condition that requires daily medication, and hydrocephalus. He told his lawyers that he had been tortured in pre-trial detention when police tried to force him to confess to criminal activity.

Police acting like thugs have repeatedly harassed, threatened, abused, detained and disappeared Ms. Pu for tirelessly fighting for her son’s freedom. She has written open letters, recorded video appeals, met with diplomats and tried to petition government authorities. Police obstructed her repeated efforts to hire lawyers for her son. Police disappeared her in November 2016 when they initially seized Huang and again for nearly two months from December 2018 to January 2019 ahead of Huang’s trial hearing.

Ms. Pu has been living under illegal house arrest since January 21, 2019, with guards outside her home, authorities controlling her communications, and police following her whenever she goes out, even to the doctor or pharmacy. She suffers from a number of medical ailments. She was diagnosed with lung cancer in the spring of 2019. In an appeal written on April 11, 2020, Ms. Pu revealed that the tumours had spread, her liver and kidney functions were abnormal, her weight had dropped significantly, and she was having chest pains.

Since being moved to Bazhong Prison on December 24, 2019, Huang Qi’s condition has been unknown. In April 2020, prison officials told Pu Wenqing that she was barred from visiting him in person due to directives from “higher up” officials banning visits due to the COVID-19 pandemic. The prison officials have refused to allow telephone or video calls due to unspecified prison “rules.” Ms. Pu wrote in her appeal that she wanted to meet her son to find out how Huang was in prison and to learn about his health situation.

On May 4, 115 Chinese signed an open letter to China’s Minister of Justice, calling on the government to free Huang Qi and to respect his right to visit with his family. They risk retaliation from police for publicly demanding Sichuan authorities respect Chinese and international law.

Under China’s Prison Law, prisoners have a right to correspondence and visits with their relatives. The UN Standard Minimum Rules for the Treatment of Prisoners stipulate that prisoners should be allowed “to communicate with their family and friends at regular intervals.” The families and lawyers of a number of detained human rights defenders (HRDs) in China have reported that officials have blocked their visits on coronavirus grounds, including Tibetan language activist Tashi Wangchuk, dissident Qin Yongmin, and lawyer Li Yuhan. Detaining HRDs incommunicado puts them at further risk of torture, including deprivation of medical treatment, and at risk of contracting the coronavirus.

The United Nations has repeatedly called on China to release Huang Qi. In April 2018, the UN Working Group on Arbitrary Detention issued an opinion that Huang was being arbitrarily detained and should be released and given compensation. In December 2018, four UN independent human rights experts raised concern about his health and again called for his release. In August 2019, seven UN rights experts again raised concern about the case to the Chinese government. Huang Qi shouldn’t be in prison, let alone potentially never allowed to see his mother again.

The international community should hold China accountable for its defiant refusal to abide by international human rights standards. Speaking out publicly about human rights violations can have an impact, including by keeping pressure on the government and showing solidarity with HRDs. China’s treatment of Huang Qi and his mother is the tip of the iceberg of systematic mistreatment of human rights defenders and the collective punishment of their families. Just ask the families of Jiang Tianyong, Wang Quanzhang, and Yu Wensheng.

The Chinese government has treated Huang Qi and Pu Wenqing with utter disregard for their human rights and human dignity. As Ms. Pu wrote, “Huang Qi’s case is an injustice and every person in China with a sense of justice knows that.” The government should take a first step to right the wrong by granting this dying woman her wish and let her see her son.