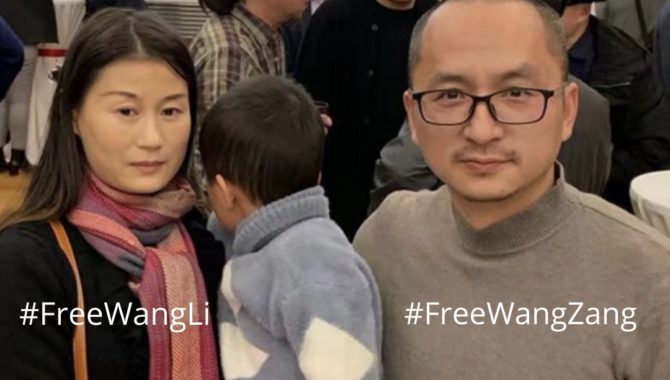 (Chinese Human Rights Defenders and PEN America—May 10, 2021) The Chinese government must end its egregious persecution of prominent poet Wang Zang (王藏) and its petty retaliation against his wife, Wang Li (王丽). The couple was set to go on trial on the charge of “inciting subversion of state power” on April 27, 2021 at the Chuxiong Yi Autonomous Prefecture Intermediate Court in Yunnan province, but the trial was delayed as the judge was supposedly ill. It is now unclear when the trial might take place, and there are fears it could be imminent.

Wang Zang (real name Wang Yuwen 王玉文)  was taken away from his home by 40-50 people who refused to be identified on May 30, 2020. Wang Liqin was subsequently detained on June 17, 2020 after she refused to be intimidated into silence by authorities and continued to demand her husband’s release. The two were then indicted by the Chuxiong Yi Autonomous Prefecture People’s Procuratorate in September 2020.

According to a local group’s reports and other sources, the only “evidence” police have against Wang Zang are his poetry, performance art work, and views expressed on social media – all of which is protected under the right to freedom of expression.

“The fact that Wang Zang’s poetry, art, and public statements are being invoked as evidence of a ‘crime,’ only serves to demonstrate how severely the Chinese government has chosen to censor, criminalize, and punish any art or utterance that they disfavor. Similarly, even a wife’s plea for her husband’s freedom is being treated as criminal. The freedom to write and to speak freely are both on trial with Wang Zang and Wang Li. The charges against them both should be immediately dropped.”

Meanwhile, sources believe that Wang Zang’s wife Wang Li (real name Wang Liqin, 王莉芹) is being prosecuted as leverage for police interrogators to pressure Wang Zang to confess. It is also an act of retaliation against her because she was spoke out on Twitter for her husband and expressed concerns about the well-being of their four children after Wang Zang’s detention.

“This case exemplifies not only the Chinese government’s blatant disrespect for freedom of expression with the prosecution of Wang Zang, but with the brazen inclusion of Wang Li it also demonstrates how Chinese authorities are increasingly willing to punish family members of those who are merely speaking out for their loved ones. China under President Xi Jinping has increasingly stressed the importance of “traditional family values”, and yet the Communist Party will not hesitate to break up a thriving young family in the pursuit of censoring voices it doesn’t approve of.”

Recently, many other family members speaking up for loved ones have faced prosecution or extra-legal harassment by the state. Chinese women’s rights and labor rights activist Li Qiaochu was detained in retaliation for revealing that her partner Xu Zhiyong and a fellow activist Ding Jiaxi were tortured while in detention. Similarly, Chen Zijuan, wife of human rights lawyer Chang Weiping, has faced harassment and threats while advocating for her detained husband.

Article 19 of the UN’s Universal Declaration of Human Rights states:

“Everyone has the right to freedom of opinion and expression; this right includes freedom to hold opinions without interference and to seek, receive and impart information and ideas through any media and regardless of frontiers.”

CHRD and PEN America urge the Chinese authorities to immediately release Wang Zang and Wang Li, respect freedom of expression in line with China’s international human rights obligations, and release all poets and writers who have been detained merely for exercising their right to freedom of expression.