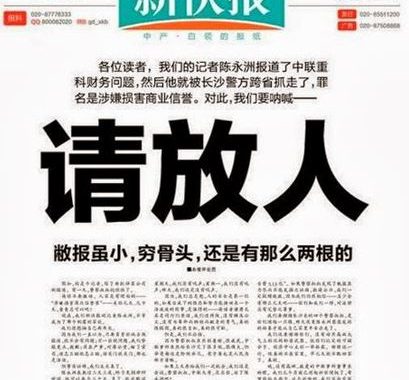 On the eve of the UN’s Universal Periodic Review on China, two more activists have been arrested in the ongoing crackdown on civil society, bringing the number of known arrests to 34 as authorities have suppressed peaceful assembly, association, and expression since March. Beijing-based financier and philanthropist Wang Gongquan (王功权) was arrested on suspicion of “gathering a crowd to disrupt order of a public place” on October 20. Initially taken into custody on September 13, Wang has taken great interest in the development of China’s civil society, namely supporting the New Citizens’ Movement spearheaded by legal advocate Xu Zhiyong (许志永). In addition, activist Yin Weihe (尹卫和) of Hunan Province was arrested on a “creating a disturbance” charge on October 11. Yin has exposed graft by police officers and called for commemoration of June Fourth victims online. Yin also has demanded the government pay reparations to individuals detained in the ongoing crackdown, such as rights lawyer Ding Jiaxi (丁家喜). Yin is currently held at Xiangxiang City Detention Center.[1]

Five weeks after Beijing-based activist Cao Shunli (曹顺利) was abducted, authorities at Chaoyang District Detention Center confirmed on October 21 that she has been criminally detained on charges of “unlawful assembly.” Cao was taken to that detention center on September 14, the day she was seized at Beijing Capital International Airport before boarding a plane to Geneva, where she was to take part in a training on UN human rights mechanisms and attend sessions of the Human Rights Council. Her family has still not received a detention notice. According to a released detainee from the same facility, the 52-year-old Cao appeared frail in detention. For years, Beijing authorities have retaliated against Cao for her efforts in advocating for civil society participation in China’s preparations for Universal Periodic Review (UPR). China underwent the second UPR of its human rights record before the Human Rights Council on October 22, with government claiming that Chinese NGOs were allowed to participate in UPR, and that activists detained in China were “criminal suspects.”[2]

Another Journalist Detained for Exposing Corruption

Authorities have detained a second journalist at the Guangdong-based newspaper New Express for exposing official malfeasance, leading the state newspaper to print a statement calling for the men to be released. Chen Yongzhou (陈永州), who was criminally detained on October 19 by police from Hunan Province, had reported on financial fraud conducted at Zoomlion Heavy Industry Science & Technology Development Company, a manufacturing firm. Chen is being detained at Changsha City No. 1 Detention Center on suspicion of “spreading fabrications that damage the reputation of a business” (Article 221 in China’s Criminal Law). On September 30, Beijing authorities arrested for “libel” Liu Hu (刘虎), another New Express journalist, in apparent retaliation for his reporting that revealed corruption and abuses of power by Communist Party officials (see CHRD report).[3]

Two New Express journalists have recently been detained for exposing official corruption, prompting the paper to publicly appeal for their release.

Chinese authorities detained a number of Tibetans between October 11 and 18, and are holding them incommunicado, in an escalating crackdown against peaceful protest and free expression in Biru (Tibetan: Diru) County in the Tibet Autonomous Region (TAR). Tibetans in Biru have been protesting a policy requiring the Chinese flag to be flown from Tibetan homes. The protest has spread from Biru’s Mowa Village to Lhasa and even areas outside the TAR. (See a previous CHRD report on the crackdown in Biru.)

Biru police have detained writer Tsultrim Gyaltsen and his friend Yugyal, a former police officer, alleging that they have “engaged in separatist activities and disrupted social stability by spreading rumors.” Gyaltsen was seized after he publicly disagreed with speeches given by high-ranking TAR officials about the continuing crackdown. Four individuals have reportedly been detained on charges of “leaking state secrets”: a Tibetan layman, Dawa Lhundup, 19; a nun, Jampa, 20; and two 20-year-old monks who had fled Biru for Lhasa in September, Jampa Lekshay and Kelnam Namgyal. A woman named Kelsang has been detained after police found images of the Dalai Lama and songs about Tibetan independence on her cell phone. In addition, police detained layman Tenzin Rangdol after he had walked his children to school in Biru. His detention triggered a protest the next day, when armed police seized more than 10 other individuals appealing for Rangdol’s release.[4]

Wu Guijun (吴贵军), who led fellow workers in protesting against their former employer, has been detained in Shenzhen for more than five months without a trial. This past May, nearly 300 employees of Diweixin, a Hong Kong-owned furniture manufacturer, went on strike and rallied for weeks in Shenzhen when their company refused to offer severance pay after it was announced that Diweixin would relocate to Guangzhou. Police detained dozens of protesters, but all were later released except for Wu. Taken into custody on May 23, Wu is facing a charge of “gathering a crowd to disrupt social order.” Wu had worked at Diweixin for nine years and suffered an injury on the job in 2006.[5]

Police in Heilongjiang Province gave Beijing-based human rights lawyer Tang Jitian (唐吉田) a five-day administrative detention on grounds of “disrupting the order of a work unit” on October 16.  Before being taken into custody, Tang had gone to the “610 Office” in Jixi City, a facility principally used to detain and “re-educate” Falun Gong practitioners, to inquire about a detainee. In 2010, Tang’s license to practice law was revoked in retaliation against his role in demanding autonomy for lawyers’ associations. During the Jasmine Crackdown on civil society in 2011, police seized Tang and subjected him to torture. When Tang was released, he was severely ill with tuberculosis, and the 44-year-old lawyer has not fully recovered. Tang’s poor health condition has prompted several lawyers and supporters to travel to Jixi to demand his release while many others followed the trip via social media.[6]

Lawyer Tang Jitian was recently given a 5-day detention after trying to see a Falun Gong practitioner in police custody.

On the eve of the UN review of China’s human rights record, more than 200 citizens in Shanghai signed a petition opposing China’s re-election to the 47-member Human Rights Council (HRC) for the two-year term that begins in 2014. The petition states that human rights conditions in the country deteriorated during the period when China served two consecutive terms on the HRC, from 2006 to 2012. The petition highlighted issues of forced eviction and demolition, illegal land-grabs, an unfair judicial system, and retaliation against those who voiced complaints in the form of torture, disappearances, and arbitrary detention in Re-education through Labor camps, prisons, and black jails.[7]