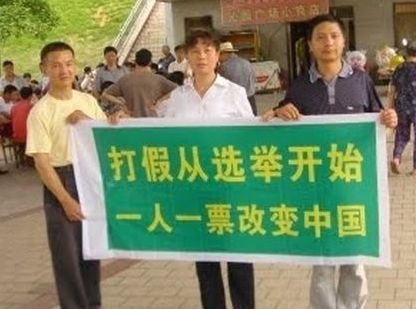 (The Network of Chinese Human Rights Defenders, June 20, 2014) – CHRD condemns the harsh punishments issued to Jiangxi activists Liu Ping (刘萍), Wei Zhongping (魏忠平), and Li Sihua (李思华) and demands their immediate release. The activists were sentenced by the Yushui County District Court in Xinyu City on June 19, over 14 months after they were first detained and more than six months after their trial. Liu, 49, and Wei, 51, received six-and-a-half-year sentences, having been convicted of “creating a disturbance,” “gathering a crowd to disrupt order of a public place,” and “using an evil cult to undermine implementation of the law.” Li Sihua, 57, was sentenced to three years’ imprisonment for “creating a disturbance.” The activists’ lawyers were reportedly given less than two days’ notice about the sentencing hearing, and around the time of the proceedings, police took away several of the activists’ supporters from outside the courthouse.

“The verdict is not just the tragedy of three individuals, but of three families and of the Chinese legal system,” remarked Liu Ping’s daughter, Liao Minyue (廖敏月), who was not allowed to attend the sentencing.

The three individuals have become influential activists in China’s growing civil society. They joined efforts in calling on top Chinese officials to disclose their personal wealth, demanded the government ratify the International Covenant on Civil and Political Rights, and ran as independent candidates in the 2011-12 elections of local legislators. For these activities, they were subjected to harassment, arbitrary detention, and torture. They were criminally detained in April 2013 as part of the nationwide crackdown on freedom of assembly, association, and expression that began in March of last year.

“The Xi Jinping administration relies heavily on the criminal justice system in persecuting human rights defenders, contradicting the government’s own claims about following the ‘rule of law’,” remarked Renee Xia, CHRD’s international director. “The government’s abuse of judicial review, legal procedures, and rights to due process, as seen in the Xinyu cases, has reached a new low.”

This past January, prominent legal advocate and scholar Xu Zhiyong (许志勇), co-founder of the Open Constitution Initiative and the New Citizens’ Movement (NCM), was sentenced to four years in prison. Several other NCM participants in Beijing have been imprisoned for up to three years. The comparatively heavy sentences that the Xinyu activists received may be partly due to their attempt to run in local People’s Congress elections, a bold challenge to the Chinese Communist Party’s control over political power. Also, their activism went beyond Jiangxi Province and the NCM’s anti-corruption and equal education rights campaigning: they have reported on human rights abuses as citizen-journalists, and they joined a growing number of activists who “gather and watch” to support individuals held in detention facilities, people facing trial, and victims of forced home evictions and demolitions. 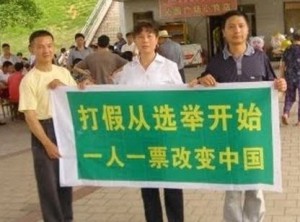 The three were initially detained on suspicion of “inciting subversion of state power,” but local authorities later changed the charge to “unlawful assembly” and added two more criminal charges for Liu and Wei. In an unusual move, the court tried all three in December 3, 2013, for “unlawful assembly” and Liu and Wei for other crimes, but unexpectedly sentenced each for “creating a disturbance,” a more serious crime. With such a change, the court made the prosecutors and the lawyers “redundant,” one lawyer commented on weibo.

The charge against Liu Ping of “using an evil cult to undermine implementation of the law” was apparently based on a “re-tweet” attributed to her of a post that raised concerns over the treatment of a Falun Gong practitioner. “This says authorities look under a magnifying glass in order to establish a serious charge over the most trivial of facts when it comes to politicized cases,” explained David Zhao, CHRD researcher.

All three have been subjected to torture during interrogation or other forms of mistreatment in detention. Liu Ping’s lawyer raised the issue of torture during the trial in December, but the court refused to dismiss evidence or a confession that may have been extracted from torture. The court also refused to file a case to investigate the torture allegation.

Liu Ping had reportedly become very weak during detention, having lost a great deal of weight while needing to force herself to eat. She is suffering from a stomach illness that has caused daily bouts of diarrhea, and she has been prevented at least once from buying medication.

“The proceedings in handling the three cases are a travesty of justice,” commented Victor Clemens, CHRD’s research coordinator. “The police, prosecutors, and judges have abused the defendants’ rights to a public hearing, access to legal counsel, and their right to be safeguarded from arbitrary detention and torture.”

CHRD reiterates our demands for the immediate release of Liu Ping, Wei Zhongping, Li Sihua, and all other detained human rights activists, including lawyers, for their peaceful exercise of freedom of expression, assembly, and association. CHRD also calls on the Chinese government to release those suffering from illnesses or injuries due to torture, and guarantee detainees’ access to adequate medical treatment.