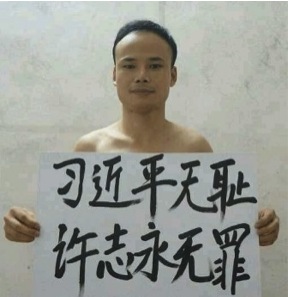 Guangdong-based activist Sun Desheng (孙德胜, also known as Sun Sihuo 孙思火) was seized and criminally detained on August 13, 2013. Authorities held Sun incommunicado until they transferred him to residential surveillance. He was formally arrested that October and moved into a detention facility. The immediate reason for his detention was after Sun held a sign in public saying “Shame on Xi Jinping, Xu Zhiyong is Innocent” days before he was taken away, but his participation in several civil society campaigns were all cited in his indictment. Sun and prominent human rights activist Guo Feixiong (郭飞雄) were indicted in the same case, and are being tried together. Sun has taken part in initiatives spearheaded by Xu Zhiyong (许志永)’s New Citizens’ Movement (NCM), a loose grouping of activists and lawyers advocating for democratic and legal reforms, constitutionalism, and social justice. Along with Xu and many other NCM members, Sun was detained in a nationwide crackdown on freedom of assembly, association, and expression that began in early 2013.

Born in 1981 in Hubei Province, Sun Desheng was in the army for two years and later worked at a factory, when he protested the segregation of rural and urban workers caused by the household registration system. Beginning in 2008, Sun began to get more involved in rights activism, and in 2011 he was detained for one month and then kept under house arrest for 100 days during the Jasmine Revolution. During this period, he was beaten and also tied up and suspended in the air for more than 14 hours.

In early 2013, Sun participated in anti-nuclear protests, anti-corruption campaigns that demanded top officials disclose their wealth, and rallies that called for China to ratify the International Covenant of Civil and Political Rights. Sun and fellow activist Yuan Fengchu (袁奉初) went on a “rights advocacy” tour to many Chinese cities during the spring of 2013. Citing such activities, the indictment against Sun and Guo accuses Guo Feixiong of organizing the above actions. While in detention, Sun has reportedly been prohibited from talking to fellow inmates, some of whom also beat him, though he has been allowed visits from his lawyer. He has not allowed to receive clothes sent by his family and has been suffering from severe arthritis. To protest his mistreatment, Sun held a hunger strike and reportedly tried to commit suicide. He was released at the end of his sentence in February 2016.