January 29, 2016       Comments Off on China Imprisons 3 Rights Defenders More Than A Year After UN Called for Their Release 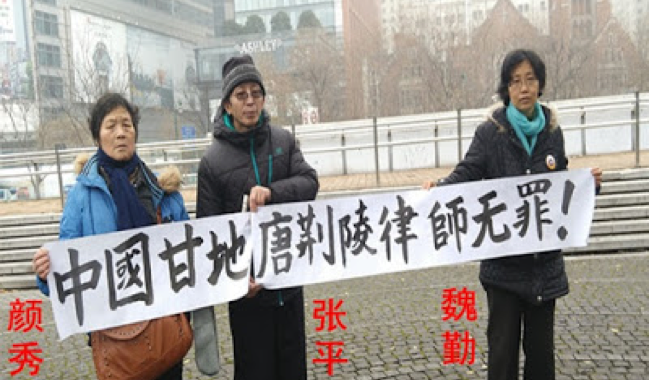 The verdict comes down amid President Xi Jinping’s relentless persecution of human rights lawyers and many other figures in China’s civil society. The court’s decision sends a clear and defiant message from the Xi government that it is determined to punish those exercising and defending human rights, especially, as in the case of these three, the rights to free expression, association, and assembly. The sentencing hearing took place more than six months after a trial held on July 23-4, 2015, and over twenty months after the three were detained in May 2014.

Debarred lawyer Tang Jingling had founded a “Non-Violent Civil Disobedience Movement” in 2006 to push for democratic reforms in China, and became known by some as “China’s Gandhi” for promoting non-violent protest. In February 2013, the three men participated in press freedom protests in Guangzhou when editors and journalists at the Southern Weekly newspaper were under government pressure to censor an article. They then took part in commemorative activities for the 25th anniversary of the Tiananmen Massacre the next year, with Tang playing an especially active role. Tang received a longer sentence than the others, likely due to his position as the leader of the movement. All three men are currently being held at Guangzhou No. 1 Detention Center.

Their cases have been marred by legal rights violations, including lengthy pre-trial detention, alleged torture, and deprivation of legal counsel. In September 2014, the UN Working Group on Arbitrary Detention issued an “opinion” calling on the government to release them unconditionally and provide state compensation. The Working Group declared that the three had been arbitrarily detained for exercising their basic human rights and had also been denied rights necessary for a fair trial.

Authorities first took the three into custody in May 2014 during the government’s crackdown around the 25th anniversary of the Tiananmen Massacre. Although initially held on suspicion of “picking quarrels and provoking trouble,” they were formally arrested for “inciting subversion,” a more serious offense that carries a potentially lengthier sentence. Their trial first opened on June 19, 2015, but was suspended until the following month, which, when resumed in July 2015, was closed to the public as authorities reportedly cited “national security” concerns.

Both Tang and Wang alleged they had been tortured while initially detained at Baiyun District Detention Center, including being physically assaulted and subjected to long and frequent interrogations. Wang told his lawyer that he confessed under duress, and that only after his coerced confession was he allowed to use the toilet and no longer beaten. After the first hearing in June, Wang’s lawyer, Sui Muqing (隋牧青), was seized by police during the July crackdown on human rights lawyers and activists, and held incommunicado for six months before being released on bail earlier this month.

In recommending the three be indicted, Guangzhou police accused Tang of “instigating” the “Non-violent Civil Disobedience Movement” and “colluding with” Wang and Yuan to take part in advocacy campaigns such as the “Meditation on the 1989 Tiananmen Square Crackdown” and “Charter 08 Signing Drive.” The indictment cited confiscated books and leaflets on non-violent political transitions as evidence of a “crime,” and referred to the materials as “illegal publications.” 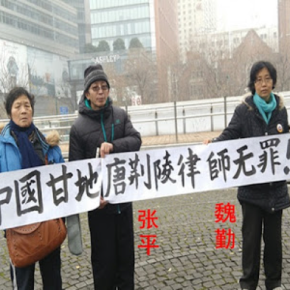 Tang Jingling, 44, is a human rights lawyer based in Guangdong Province, who has worked on cases involving corruption, counterfeit medicine, land grabs, and persecuted human rights defenders. As a result of his work, authorities refused to renew Tang’s law license in 2006, but he continued to take on cases as a “citizen representative” or provide legal assistance to victims of rights violations. During the online call for “Jasmine Rallies” in 2011, authorities detained Tang for five months in a black jail, where he was tortured.

Wang Qingying, 33, previously a teacher at Guangdong University of Technology, became involved in human rights activism in 2006. The school fired him in 2009 under pressure from local authorities after he signed “Charter 08.” He has been active in the “Non-violent Citizens’ Disobedience Movement” since 2013.

Yuan Xinting, 44, whose real name is Yuan Chaoyang (袁朝阳), was previously an editor at Guangzhou Press. After he signed “Charter 08,” the company fired him in 2009 under pressure from local authorities. Originally from Sichuan Province, Yuan was forcibly disappeared in March 2011 during the crackdown on Jasmine Rallies, and, like Wang, took part in the “Non-violent Citizens’ Disobedience Movement” beginning in 2013.