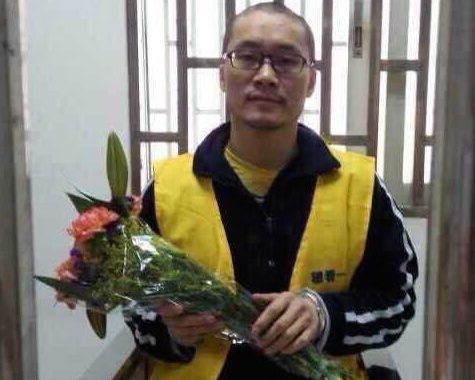 The trial of disbarred lawyer Tang Jingling (唐荆陵) and activists Yuan Chaoyang (袁朝阳 aka Yuan Xinting 袁新亭) and Wang Qingying (王清营) began behind closed doors at the Guangzhou Intermediate People’s Court on June 19. The three are charged with “inciting subversion of state power.” No member of the public was allowed to attend the trial. Police also tried to block family members from attending, but eventually let a few in after their lawyers protested. The trial lasted only two hours before the court suspended the hearing when the three defendants dismissed their lawyers, in order to protest against a number of procedural violations. Outside the courthouse, and in the days leading up to the trial, several dozens of activists in Guangzhou and other provinces had been placed under house arrest or detained in “black jails” by police in concerted efforts to block them from trying to attend the trial, including the wife of Tang Jingling.

Since their initial detention in May 2014, law enforcement and judicial authorities have violated numerous due process rights of Tang, Yuan, and Wang, following a pattern of abuses in criminal cases against human rights defenders, which CHRD documented in the 2014 Annual Report on the Situation of Human Rights Defenders in China.

The charges of “inciting subversion” against the three relate to their spearheading the “Non-Violent Civil Disobedience Movement,” which advocates for non-cooperation with government policies that are non-democratic, in violation of human rights, or the law. They engaged in advocacy campaigns, calling for abolishing the household registration system, and pushing for free and fair local elections, which the indictment cited as “evidence” of the crime of “inciting subversion.” The indictment against them cited confiscated books and leaflets on non-violent political transitions as evidence of “crime” and referred to them as illegal publications.

International bodies have criticised China’s “subversion” laws as being likely to be misused to punish the exercise of internationally-protected rights. Following a 1997 visit to China by the UN Working Group on Arbitrary Detention (WGAD), the independent experts stated that China’s laws related to “subversion” and “inciting subversion” contained a “broad and imprecise definition liable to be both misapplied and misused” and that, under such a definition, “even communication of thoughts and ideas or, for that matter, opinions, without intent to commit any violent or criminal act, may be regarded as subversion.”

The three activists have remained in detention seven months after the UN Human Rights Council’s Working Group on Arbitrary Detention (WGAD) adopted an opinion in November 2014 demanding the immediate release of Tang Jingling, Yuan Xinting, and Wang Qingying and the provision of state compensation to them for the arbitrary deprivation of their liberty. WGAD ruled that the detentions of Tang, Yuan and Wang were the result of their legitimate exercise of the rights to free expression, association, and assembly. As a member of the Human Rights Council (HRC), China has generally ignored such calls by the HRC’s Special Procedures, leaving a clear track record of failures to honor China’s own “voluntary pledges” to the HRC to “promote and protect human rights.”[1]

The health of detained activist Jia Lingmin (贾灵敏) has rapidly deteriorated following a month-long hunger strike to protest abuses of her legal rights. Jia began her second hunger strike in mid-May, after trial proceedings at Gongyi City People’s Court in Zhengzhou were suspended for a second time. When she appeared at her trial that resumed on June 2, Jia reportedly looked very weak and gaunt. She told her lawyer that a doctor at the detention center tried to force-feed her with fluids by injection.

Detained in May 2014 and charged with “creating a disturbance,” Jia was held in pre-trial detention for almost a year before her trial first opened in late April. Courts suspended that trial and the rescheduled hearing in mid-May when Jia dismissed her lawyers in protest over violations of her legal rights by the court and presiding judges. The abuses include, among others, the admittance of illegal evidence, lack of acknowledgement of her choice of legal counsel, denial of lawyer visits, insufficient court notification of defense witnesses about when they can testify, and barring supporters from hearings while instead reserving courtroom seats to government personnel (in effect holding a closed trial). During the resumed hearing on June 2, police prevented a large number of Jia’s supporters from entering the courtroom and took several of them into police custody. Jia’s detention stems from her staunch advocacy on behalf of victims of forced home demolitions. She is being held at Zhengzhou No. 3 Detention Center.[2]

Beijing police have recommended defense lawyer Xia Lin (夏霖) be indicted on charges of “fraud.” Xia, the former defense lawyer of the co-founder of the independent think tank Transition Institute, Guo Yushan (郭玉闪), has been in detention since November 8. On May 18, police asked the Beijing Municipality No. 2 People’s Procuratorate to place the charge. Lawyer Xia accepted the family’s authorization to represent Guo Yushan following Guo’s detention in October 2014, but Xia was repeatedly blocked from visiting his client before being taken into police custody himself. It is believed that his detention was directly tied to undertaking legal representation in a “politically sensitive” case like that of Guo’s. It remains unclear what evidence authorities have used to bolster their trumped-up “fraud” charge. He is being held at Beijing No. 1 Detention Center.

Communication from the Chinese government to UN human rights experts claimed that Xia has been detained for “fraud.” It noted that his arrest was approved on January 3, 2015, 56 days after his detention. This is in clear violation of Article 89 of China’s Criminal Procedure Law, which states stated that the procuratorate must issue an approval of an arrest warrant at the latest 37 days after the individual is placed under criminal detention, or they must be immediately released.

The criminal persecution of Xia, a colleague of prominent human rights lawyer Pu Zhiqiang (浦志强) at Huayi Law Firm in Beijing and a former member of Pu’s legal defense team, is believed to be retaliation for his work. Xia has taken on many politically-sensitive cases pro-bono, including several death penalty cases and the case of imprisoned environmental activist Tan Zuoren (谭作人) following the Sichuan earthquake in 2008. The criminal prosecution of lawyer Xia is a particularly egregious example of the increasingly hazardous working environment for Chinese human rights lawyers under President Xi Jinping.[3]