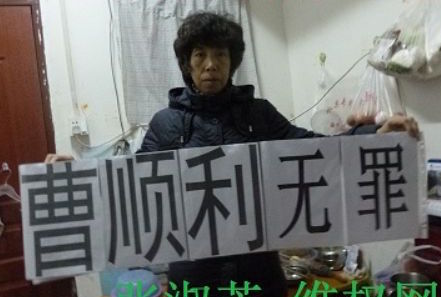 Heilongjiang petitioner-turned-activist Zhang Shuzhi (张淑芝), who is terminally ill with cancer, has been given a four-year prison sentence. The punishment is in retaliation against her exercising the rights to free expression and peaceful assembly, and for defending others’ rights, such as calling for the freedom of incarcerated activists. After hearing her case on December 21 last year, the Wangkui County People’s Court convicted the 55-year-old Zhang of “picking quarrels and provoking troubles” on January 28. In its verdict, the court cited as “evidence” her petitioning activities going back more than a decade, claiming that her lodging of grievances and protesting of abuses “severely disrupted the social order.” Despite Zhang’s poor health, authorities have refused to release her on bail. 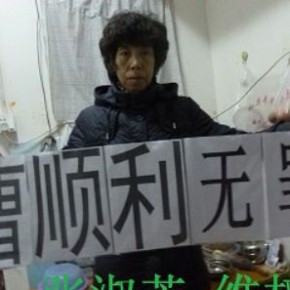 Heilongjiang activist Zhang Shuzhi (张淑芝), terminally ill with cancer, has been sentenced to 4 years in prison.

Zhang’s case has been marred by violations of her legal and procedural rights. She was seized in Beijing on October 26, 2015, and brought two days later to the Wangkui County Detention Center. However, Heilongjiang police did not notify her family within the time prescribed by law, and she was not allowed at trial to be represented by a lawyer of her own choosing. During her trial in December, the presiding judge repeatedly interrupted Zhang, who struggled to talk due to her physical condition, when she tried to speak on her own behalf. Lawyer Lü Fangzhi (吕方芝), who was only allowed to take on Zhang’s case after the trial, was initially blocked by police from meeting with her.

Among her most recent advocacy activities, Zhang had called for the release of imprisoned members of China’s civil society, including Xu Zhiyong (许志永), Yang Lin (杨林), and Ding Jiaxi (丁家喜). Zhang was also part of a “rights defense team” that went looking for activist Cao Shunli (曹顺利) after she was disappeared in September 2013 and then called for Cao’s release after her detention was confirmed. Cao eventually died in a Beijing hospital in March 2014 after being deprived of adequate medical treatment while detained. Along with other activists, Zhang had joined Cao Shunli to push for a civil society role in the UN Universal Periodic Review of China, including by taking part in sit-ins in the summer of 2013 in front of the Ministry of Foreign Affairs in Beijing.

Zhang Shuzhi began petitioning in the 1990s after she lost wages due to illness and was forced to cover her own medical expenses, and in the process exposed corrupt practices by the head of her work unit. In retaliation for her activities, authorities have for years subjected her to threats and intimidation, beatings and other forms of physical abuse, and detention in black jails and Re-education through Labor facilities.[1]

According to cases documented by CHRD, 10 mainland activists remain in custody for expressing support for pro-democracy demonstrations in Hong Kong, including nine seized in October 2014 and one in November 2015. Six of these activists have been put on trial, including four this past November and December, but only one verdict has been known to be issued. In six of the 10 cases, detainees have been arrested or tried for “inciting subversion of state power,” a “political” crime under the category of “endangering state security” offenses, after initially being detained for less serious offenses. These detainees have been deprived of various due process rights, including access to legal counsel and prompt adjudication of their cases. Several have reported being tortured or mistreated in other ways while in custody, and two have reportedly conducted hunger strikes to protest their unjust detentions.

Among those held since October 2014 is Guangdong-based women’s rights and housing rights activist Su Changlan (苏昌兰), whose detention the UN Working Group on Arbitrary Detention declared “arbitrary” in December, an opinion that the body made public in January. Su was indicted in November 2015 on suspicion of “inciting subversion” after she publicly supported the Occupy Central movement. While awaiting trial, she is being held at Nanhai District Detention Center in Foshan City.

Ye Xiaozheng (叶晓峥, also known by the screen name “Humian Yidan” 湖面一丹), is the only detainee tried from the crackdown whose verdict has been announced. Ye was sentenced to 18 months in prison on December 29, 2015, after he was tried last July for “picking quarrels and provoking troubles” by the Huicheng District People’s Court in Guangdong. Authorities had accused him of spreading “false” information online, and inciting a September 2014 strike by trash collectors in Boluo County in Huizhou City. His lawyer, Sui Muqing (随牧青), met him in December 2014, when he learned that Ye had been harshly interrogated for long periods while shackled. Ye remains held at Huizhou City Detention Center.

Five activists detained in October 2014 are known to have been tried but not yet issued a verdict:

Ji Sizun (纪斯尊) was tried on December 15, 2015, on charges of “gathering a crowd to disrupt order of a public place” and “picking quarrels and provoking troubles” by the Minhou County People’s Court in Fuzhou City in Fujian. He was detained in Fuzhou—while en route to Beijing to give an interview with People’s Daily—and arrested in March 2015. He is being held at Fuzhou No. 1 Detention Center.

Sun Feng (孙峰) was tried on June 10, 2015, for “inciting subversion” by the Zibo City Intermediate People’s Court in Shandong. Sun has been physically injured by being force-fed after conducting several brief hunger strikes at Zibo City Detention Center, according to his lawyer, Lin Qilei (蔺其磊). Lawyer Lin has said that the court may announce a verdict in Sun’s case on February 29. Sun was formally arrested in November 2014.

Wang Mo (王默) was tried on charges of “inciting subversion” on November 19, 2015, by the Guangzhou Municipal Intermediate People’s Court. He was first taken into custody on suspicion of “picking quarrels and provoking troubles” after holding up a banner in a Guangzhou park. Wang was formally arrested on a more serious “inciting subversion” offense in November 2014, and is being held at Guangzhou No. 1 Detention Center.

Xie Wenfei (谢文飞) was tried for “inciting subversion” on November 19, 2015, by the Guangzhou Municipal Intermediate People’s Court. Xie had been taken into custody for “picking quarrels and provoking troubles.” Reportedly, Xie was tortured at Guangzhou No. 1 Detention Center. According to his lawyer, Wu Kuiming (吴魁明), Xie’s arms and legs were shackled for over 100 hours, and for a stretch of time he was given limited access to water and the bathroom, and he was deprived of sleep.

Zhang Shengyu (张圣雨, whose real name is Zhang Rongping, 张荣平), was tried for “inciting subversion” by the Guangzhou Municipal Intermediate People’s Court on November 23, 2015. He was arrested for that crime in February 2015, but after being criminally detained in October 2014 on suspicion of “picking quarrels and provoking troubles.” Zhang was held incommunicado for months until his lawyer, Liu Zhengqing (刘正清), was finally allowed to meet him in January 2015 at Guangzhou No. 1 Detention Center. In September 2015, Zhang reportedly complained about being disciplined in detention, and in retaliation was shackled, beaten, and kicked in the head, and was restricted from using the toilet, washing his teeth, washing, or changing his clothes.

Two activists detained in October 2014 have been formally arrested but not yet indicted:

Chen Qitang (陈启棠, aka Tian Li, 天理), was arrested in December 2014 on suspicion of “inciting subversion.” Chen initially served a 10-day administration detention that October but was taken back into custody due to his association with fellow Foshan activist Su Changlan (above). Chen is being held at Nanhai District Detention Center in Foshan.

Xia Lin (夏霖) was arrested in January 2015 on suspicion of “fraud,” after being criminally detained the previous November. Xia, a past colleague of rights lawyer Pu Zhiqiang (浦志强) at the Huayi Law Firm in Beijing, is being detained at Beijing No. 1 Detention Center.

In addition to the nine above, who have been held since the fall of 2014, rights defender Pei Guodong (裴国动) of Hebei Province was criminally detained on November 14, 2015, due to pro-Hong Kong activities dating back to October 2014. Pei has been on a hunger strike to protest his detention ever since being taken into custody. He was indicted on December 10 on a charge of “picking quarrels and provoking troubles.” Prosecutors allege that he provided an overseas website with photographs of mainland activists holding a banner with a message of support for the movement in Hong Kong. According to his lawyer, Li Weida (李威达), Pei is being force-fed in a hospital and has grown so weak that he can only get around with a wheelchair, and he also suffers from high blood pressure, heart disease, and diabetes. Pre-trial proceedings on his case took place on January 26 at the Weichang Manchu and Mongol Autonomous County People’s Court in Chengde City. In court, lawyer Li called for the judge to throw out illegal evidence against Pei and allow him to be released on bail due to his physical state, but neither request was granted.