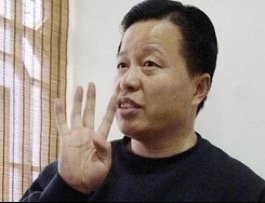 Lawyer Gao Zhisheng (高智晟), was manhandled and threatened by police and thugs after he met with relatives for Chinese New Year.

On January 30-31, rights lawyer Gao Zhisheng (高智晟) was manhandled and threatened after he left his home in Shaanxi Province and met with relatives in a nearby city for Chinese New Year. Gao has recently made comments online in support of imprisoned activist Guo Feixiong (郭飞雄) and the targets of the “709” crackdown on lawyers and activists. Gao, who was released from prison in Xinjiang in August 2014 following a three-year prison sentence, lived under illegal house arrest in Urumqi and then in his family’s rural village in Yulin, Shaanxi Province. When Gao went to his relatives’ home in urban Yulin City, officers from Yuyang District Public Security Bureau, along with thugs, subjected Gao and his relatives to over 30 hours of harassment, including hammering on the doors and windows, shouting insults, and shoving them if they went outside. Eventually, Gao had to leave the city to spare his relatives from the attack.[i]

On February 1, a Chinese court sentenced two Jilin petitioners, Guo Hongwei (郭洪伟) and his 76-year-old mother, Xiao Yunling (肖蕴苓), to prison terms of 13 years and six years, respectively, with both convicted on combined charges of “extorting the government” and “picking quarrels and provoking trouble.” Guo received an unusually long sentence of 11 years for “extorting the government” and five years for “picking quarrels and provoking trouble,” to be served consecutively. One of their lawyers, Shu Xiangxin (舒向新), was himself sentenced to prison last month following years of harassment from Shandong authorities, who had levied the same charge of “extorting the government” against him for his efforts to defend his clients.

The case is emblematic of government authorities’ retaliation against citizens who use the law to pursue state compensation in rights infringement cases. The two had attempted to use China’s State Compensation Law in seeking damage for Guo’s previous five-year prison sentence that they felt was unjust. Guo, 53, began petitioning upon his release from prison in 2009 after serving a sentence for “embezzling public funds.” The Tiedong District People’s Court in Siping City, Jilin held the first trial in November 10, 2015. Authorities held Guo and Xiao at Siping City Detention Center after police seized them in March 2015. Guo reportedly was subjected to torture during his detention, and had to be hospitalized in October 2015.[ii]

Liaoning-based activist Jiang Lijun (姜力钧) received a three-year prison sentence on January 29 for “picking quarrels and provoking trouble,” following a trial by the Dadong District People’s Court in Shenyang on July 10, 2015. Jiang was taken into custody in June 2014 on suspicion of “picking quarrels and provoking trouble” and also “inciting subversion of state power” during the crackdown around the 25th anniversary of the Tiananmen Massacre in 2014, but authorities later dropped the second charge. His detention was tied to articles he posted online that authorities deemed “provoking” and “subversive.” Authorities have used the charge “picking quarrels and provoking trouble” to suppress free expression online, following the Supreme People’s Court’s 2013 judicial interpretation that gave police the authority to maintain “public order” in cyberspace.

Jiang is being held at Shenyang City No. 1 Detention Center, where he has allegedly been subjected to torture to force him to confess, including being water-boarded at least 30 times. Authorities have not pursued an investigation into the torture allegations made by Jiang or his family and lawyers. Impunity for perpetrators of torture in China is a persistent problem. Jiang was jailed for four years in 2003 for “inciting subversion” after Yahoo! provided details of his account to Chinese authorities, who then used his emails to convict him.[iii]

Jinan-based lawyer Liu Shuqing (刘书庆) has confirmed that judicial authorities cancelled his license to practice law on January 14, suspending his legal practice. Liu believes that the move is retaliation against him because he has taken on “politically” sensitive cases representing other human rights lawyers detained in the “709” crackdown. The cancelling of Liu’s license comes amid pressure on other human rights lawyers for also representing detainees from the crackdown, including lawyer Feng Yanqiang (冯延强), who was sacked by his law firm in late 2015, and lawyers Zheng Xiang (郑湘), Xiong Dongmei (熊冬梅), and Liu Rongsheng (刘荣生), who were subjected to intimidation.

Police recently questioned Liu after he participated in a seminar on December 4 on the July crackdown that especially targeted rights lawyers. Authorities brought him in for questioning on the very day that he had agreed to represent then-detained lawyer Wang Qiushi (王秋实), who himself was going to defend the now-arrested Wang Quanzhang (王全璋). Wang Qiushi was released on February 1 after spending a month in “residential surveillance at a designated location.” Liu was also briefly detained and interrogated in July 2015, and his previous clients include New Citizens’ Movement founder Xu Zhiyong (许志永).[iv]