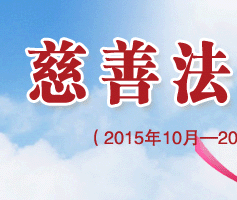 China’s newly adopted Charity Law further debilitates independent non-profit groups in the country by restricting their access to domestic funding. The new legislation is yet another tool the government can use to strangle independent organizations in China’s emerging civil society, according to activists who spoke with CHRD about the legislation. The law (Chinese // English – unofficial, partial translation), which the National People’s Congress (NPC) passed on March 16 at its annual session, will take effect on September 1, 2016.

With the Charity Law, the government has added more legal restrictions on Chinese NGOs’ abilities to raise funds, which could in turn lead to repercussions for groups that seek and receive financial support. For example, the law states that NGOs that are “ineligible” to conduct fundraising may be fined for such activity, and allows police to pursue criminal investigations for violations of the law (under Article 109). Like other legislation drafted or implemented over the past two years in China, the Charity Law uses “national security” as a pretext for restricting the operations of independent groups. Since President Xi Jinping came to power, authorities have drastically shrunk the space for independent groups to promote labor, health, and women’s rights, and rights of persons with disabilities. The Charity Law gives police only more legal tools to punish these groups for soliciting or receiving funding from both private and public charitable sources, and the law reflects a global trend where authoritarian states have adopted draconian laws and regulations to curtail freedom of association and close off terrain for independent civil society to function.

Below are some key provisions in the Charity Law with serious implications for civil society groups:

Staff members of Chinese non-profit advocacy groups who spoke with CHRD feel that the law’s definition places their work under the umbrella of the Charity Law and its numerous funding restrictions. In the past two years, police have targeted many independent advocacy groups that conducted “public interest” work by focusing investigations on the groups’ sources of funding. Police have detained their staff members or advisors for alleged financial crimes, including “illegal business activity.” Several of these independent organizations have since shut down due to pressure from authorities. They include the anti-discrimination group Yirenping, the social policy research and advocacy think tank Transition Institute, rural education providers Liren Libraries, disability rights group Zhongyixing, labor rights organizations Panyu Workers Center and the Nanfeiyan Social Worker Center, and women’s rights organizations Weizhiming Women’s Center and Beijing Zhongze Women’s Legal Counseling and Service Center.

Based on these provisions, the Charity Law restricts all online fundraising, or “crowd sourcing,” to government registered charities while levelling heavy fines to other groups that try to raise money in these ways. Though the government has clarified that the law would permit individuals to raise funds for themselves or family members who are facing hardship, it is unlikely it extends to groups or individuals raising money on behalf of non-family members. These restrictions would close off potential funding channels for independent advocacy groups and for private citizens collecting funds online to support prisoners of conscience or government critics facing hefty fines by authorities. In 2011, when the artist Ai Weiwei (艾未未) was detained and fined for “evading taxes,” his supporters collected donations online for him. When the human rights lawyer Wang Yu (王宇) was harassed by authorities who ordered her to pay “damages” in a case where she was wrongfully convicted, her supporters raised a large sum of money online within a few days in 2015 to pay those fees. According to one former director at an independent group and a human rights activist, “These restrictions block the most commonly used and effective channel for raising funding by groups and individuals—collecting donations online—by making such activities illegal.”

China’s new Charity Law spells out regulations for government-approved organizations, including restrictions that will cut off fundraising channels for human rights groups.

The law may lead to the criminalization of the operations or fundraising by independent groups and activists based on accusations of “endangering national security.” The core problem is that the definition of “national security” is very broad and vague in both the National Security Law and the Criminal Law, and it thus becomes easy for authorities to cite the general wording of provisions to persecute groups and individuals. Over the past year, there has been a large increase in the number of activists and lawyers associated with independent groups or networks held on accusations of “endangering national security.”

The new Charity Law is Xi Jinping government’s latest effort to legalize restrictions on Chinese citizens exercising their freedom of association and on civil society, in violation of international law and standards. In 2014, the United Nations special expert on the rights to peaceful assembly and association issued general principles on “protecting civic space and the right to access resources,” which emphasizes that “the ability to seek, receive and use resources is inherent to the right to freedom of association and essential to the existence and effective operations of any association.” In 1999, the UN General Assembly adopted resolution 53/144, known as the “declaration on human rights defenders,” which confirms that everyone has the right to “solicit, receive and utilize resources for the express purpose of promoting and protecting human rights.” UN human rights bodies have repeatedly raised concerns that governments cite “national security” to restrict civil liberties, often by passing laws that include vague, overly broad definitions of “national security.” In resolution 27/31, passed in September 2014, the UN Human Rights Council urged governments to stop targeting civil society actors and organizations through legislation on counter-terrorism, national security, and funding for civil society development.

The Charity Law’s passage comes as the passage of the draft Overseas NGO Management Law has stalled for the time being in the NPC. While the two laws differ in style—for one, the latter was drafted by the police, who have no experience in formally managing NGOs—both contain provisions targeting the sources of funding for non-governmental groups. The draft Overseas NGO law would prohibit domestic NGOs from receiving funds from non-registered overseas organizations, and grant the Ministry of Public Security vast powers to register and oversee foreign NGOs operating in China. In comparison, the Charity Law places the Ministry of Civil Affairs in charge, the body typically responsible for registering and overseeing social groups. The law also appears to break new ground for registration of charities, with Article 10 seemingly allowing them to register directly with the Ministry without needing a government agency (to act as a “professional sponsor,” as was the case under the previous regulations on social organizations). Despite the two laws’ different features, members of independent groups in China see them together as a “threat to our existence,” as one told CHRD, since the laws would hinder independent groups from raising money both domestically and overseas. Another activist explained, “The purpose of these laws is to encircle civil society and force Chinese Communist Party ideology on society.”

In effect, the Charity Law clarifies the legal environment and draws clearer guidelines for Chinese GONGOs (“government-organized non-governmental organizations”) and for social groups that the government approves of or considers less politically threatening. However, as one Chinese activist told CHRD, China needs independent and critical voices and rights-based NGOs as well as rule of law “to be a part of the solution to growing social conflicts in Chinese society as the country transforms, with problems ranging from environmental degradation, unemployment, government corruption, to food and medical safety.”