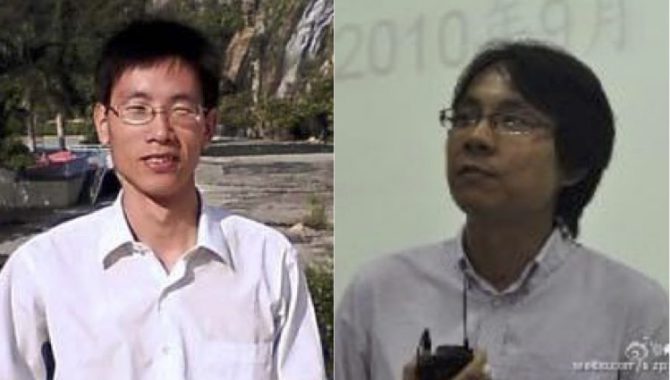 (Network of Chinese Human Rights Defenders – June 15, 2015) – On the evening of June 12, Guangdong police acting in coordination with state security officers from Beijing and Henan Province seized two activists and detained them on suspicion of “illegal business activity.” Guo Bin (郭斌), head of the NGO Zhongyixing that advocates for the rights of persons with disability, is currently being held at Futian District Detention Center in Shenzhen. Yang Zhanqing (杨占青), who now works independently after previously working with a health rights and anti-discrimination group is being held at Huiyang District Detention Center in Huizhou City. They will reportedly be moved to Zhengzhou No. 2 Detention Center in Henan Province on June 15. Both men have worked with NGOs pushing for policy reform and the promotion of the rights of persons with disability or those facing discrimination due to certain health conditions such as Hepatitis B. They also advocate for consumer rights and food safety, equal education and employment opportunities, and the rights of sex workers.[1]

The detention of Guo and Yang indicates an intensifying crackdown on NGOs under President Xi Jinping. It is in step with the month long detention earlier this year of the Five Feminists—Li Tingting (李婷婷), Wang Man (王曼), Wei Tingting (韦婷婷), Wu Rongrong (武嵘嵘), and Zheng Churan (郑楚然). The five women remain under police surveillance as criminal suspects after they were released on “bail pending further investigation.” The government has recently targeted those who work on what had generally been considered “politically non-sensitive” issues, such as health rights, women’s rights, LGBT rights and anti-discrimination.

These two newest detentions follow a trend in China’s criminalization of NGO activists by accusing them of the crime of “illegal business activity.” In May 2014, police detained lawyer Chang Boyang (常伯阳) for “illegal business activity” for six months. Police subsequently raided the office of the NGO Zhengzhou Yirenping, which Chang co-founded and served as legal counsel, and interrogated other staff members. Earlier this year, the office of the NGO Beijing Yirenping was also searched, and the organization singled out by the foreign ministry as having “violated the law.” Additionally, Guo Yushan (郭玉闪), the co-founder and former director of independent think tank the Transition Institute, and He Zhengjun (何正军), the group’s administrative director, have spent six months in detention and face trial imminently also on charges of “illegal business activity.”

The government under Xi has recently taken a further step to legitimize its repression of civil society with the introduction of three draft laws: Draft Overseas NGO Management Law, Draft National Security Law, and the Draft Anti-Terror Act. Once enacted, these laws would provide the state with legal backing to continue to shut down space for civil society and the systemic deprivation of the rights to freedom of assembly, association, and expression.

These draft laws go far beyond legitimate steps used to combat terrorism, protect national security, or regulate overseas groups operating in China. The government is legitimizing mass police surveillance, harassment, criminalization, and imprisonment of those who challenge the Chinese Communist Party’s power by exposing corruption and rights abuses, and advocate for positive change, such as human rights defenders, journalists, lawyers, and other civil society actors.