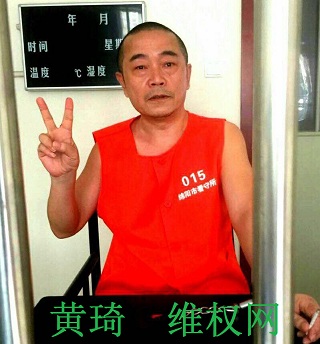 (Network of Chinese Human Rights Defenders—January 14, 2019) Chinese authorities secretly tried Huang Qi, human rights defender, citizen journalist, and head of the rights group “6.4 Tianwang,” on January 14. The Mianyang City Intermediate Court in Sichuan put Huang, who is seriously ill, on trial on charges of “illegally providing state secrets to foreign entities” and “intentionally leaking state secrets.” The court has not announced a verdict. No member of the public was allowed to attend the trial and no information about the trial has been made public. One of Huang’s lawyers was never told about the trial. Huang’s 85-year-old mother has been forced into disappearance for her efforts to gain his release. The Chinese government must immediately and unconditionally release Huang Qi and his mother and end its persecution of Huang Qi for exercising his freedom of expression and association.

The closed-door hearing violated Huang Qi (黄琦)‘s right to a fair and public trial by an independent court. Authorities never notified one of Huang’s lawyers, Liu Zhengqing (刘正清), about the trial, as the Guangdong judicial bureau began disbarment proceedings against him in reprisal for his professional work. His other lawyer Li Jinglin (李静林) must be under pressures to not divulge information on the trial, including Huang’s health. Huang Qi’s mother has been disappeared by authorities since early December, and her whereabouts or attendance at the trial is unknown. Police intercepted supporters who travelled to Mianyang to attend the trial and took some local activists on a “forced sightseeing tour.” Reportedly, diplomats from the US and UK embassies attempted to attend the trial but were turned away.

For the first 10 months of Huang’s 2-year detention, police did not allow him any access to a lawyer. Once granted access to legal counsel, Huang reported to his lawyers that authorities have tortured him in attempts to force him to confess, which he had refused.

Huang has been deprived of appropriate medical care for kidney disease, accumulation of fluid in the brain, heart disease, and dangerously high blood pressure while held at Mianyang City Detention Center. His health has deteriorated to such a degree that 14 human rights NGOs and 4 UN independent human rights experts issued statements at the end of 2018 calling for Huang’s release over concerns he could die in detention. Several human rights defenders and ethnic and religious minorities have died in detention in recent years due to a lack of prompt medical treatment, including Liu Xiaobo, Cao Shunli, Yang Tongyan, and Tenzin Delek Rinpoche, intensifying fears that Huang Qi might suffer the same fate without urgent intervention.

Police initially detained Huang in November 28, 2016 and arrested him the following month on charges of “illegally providing state secrets to foreign entities.” A trial scheduled for June 20, 2018 was suspended without any official reason provided. In October 2018 police added an additional charge of “intentionally leaking state secrets.” The so-called “states secrets” in the case are believed to be a document from Mianyang City government and party officials that listed Huang Qi and 64 Tianwang as targets for a government crackdown, which Huang posted on their website in April 2016. Government officials then retroactively classified the document as “top secret,” taking advantage of criticized loopholes in China’s state secrets legislation.

Huang Qi established China’s first-known human rights monitoring website in 1998, disseminating reports about Chinese individuals who had been trafficked and disappeared. Huang has served two prison sentences, totalling eight years, in reprisal for his human rights work, and was often tortured and otherwise to ill-treated. Born in 1963, Huang Qi graduated from Sichuan University and was formerly a businessman. His work in citizen journalism has received international awards, including two from Reporters Without Borders, which awarded 64 Tianwang the Press Freedom Prize in 2016, and honored Huang in 2004 with the Cyber-Freedom Prize.

In April 2018, the independent experts on the UN Working Group on Arbitrary Detention issued an opinion, judging that Huang’s detention is arbitrary and the government must release him and provide him state compensation for the harm done to him.