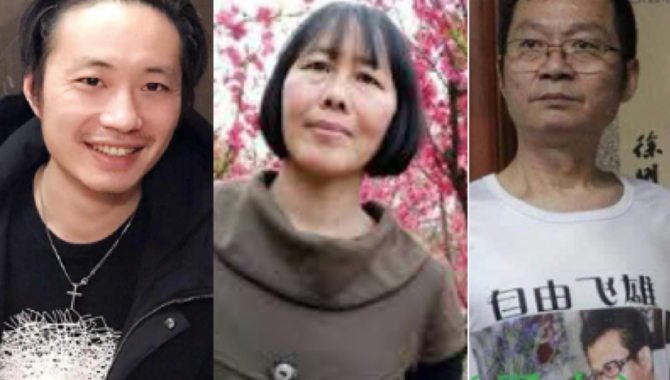 On Christmas Day, Nanjing Intermediate Court convicted and sentenced journalist Sun Lin (孙林) to 4 years in prison on charges of “inciting subversion of state power,” following a February 9, 2018 trial. The court reportedly convicted Sun, also known by the pen name “Jie Mu” (孑木), for social media posts he wrote or forwarded about democracy and politics, and for shouting “down with the Communist Party” at a local community meeting. He reportedly said in the pre-trial meeting he had been forced to take unknown medication while held at Nanjing City Detention Center. In an unusual move, the court convicted Sun in absentia; authorities held Sun in the detention center, claiming he was “emotionally unstable,” while the judges handed down the sentence in court. Authorities first detained Sun Lin on November 16, 2016 on “picking quarrels and provoking trouble” charges while he was taking photos outside the trial of another activist. Later he was indicted on the more serious charge. He has previously served a four-year sentence in reprisal for his reporting, including on alleged forced evictions at a Nanjing spice factory.

Tianjin No. 2 Intermediate Court tried lawyer Wang Quanzhang (王全璋) for “subversion of state power” behind closed doors on December 26, after nearly 3.5 years incommunicado detention. The hearing ended without a verdict. Wang reportedly fired his government-appointed lawyer during the hearing, which proceeded regardless, and it’s unclear if he had legal representation. His wife, Li Wenzu (李文足), received notification two days before the trial but police detained her in her home to prevent her from attending. Tianjin No. 2 Procuratorate’s 2017 indictment indicates that the harsh persecution of Wang Quanzhang is in reprisal for his human rights activities, including establishing a human rights NGO that accepted foreign funding to provide legal assistance and trainings, protesting against the torture of human rights lawyers, and providing legal representation to Falun Gong practitioners. Since being detained in August 2015, Wang was held in a secret location for several months, denied access to legal counsel most of the time and denied any visits or communication with his family. He was reportedly subjected to repeated electric shocks during interrogations, causing him to pass out. The UN Working Group on Arbitrary Detention determined in August 2018 that the Chinese government’s detention of Wang Quanzhang was arbitrary and demanded his immediate and unconditional release, with state compensation for the harm done to him. Wang is being held at Tianjin No. 1 Detention Center.

Zhuhai Intermediate Court convicted NGO activist Zhen Jianghua (甄江华) of “inciting subversion” in a secret hearing on December 28, following a secret trial in August. Zhen received a two-year prison sentence, according to CHRD’s sources. Throughout his detention, authorities denied all meetings with his family-appointed lawyer Ren Quanniu (任全牛) on national security grounds, and then later claimed Zhen had “fired” him. At the time of Zhen’s initial detention in September 2017, he ran the NGO Human Rights Campaign in China (权利运动), an online platform that publishes information about rights violations in China. Authorities initially criminally detained Zhen on “inciting subversion” charges, before putting him under “residential surveillance at a designated location” on an unknown date, and then formally arresting him around March 2018. He is believed to be held in Zhuhai City No. 2 Detention Center.

On December 28, Shijingshan District Court in Beijing tried and convicted citizen journalist Ding Lingjie (丁灵杰) and petitioners Li Xuehui (李学惠) and Wang Fengxian (王风仙). They received 20-month prison sentences, but Wang’s sentence was suspended for two years. The case centered around a video clip shot by Li and staring Wang Fengxian’s elderly mother, which authorities claimed “insulted a State leader” by mocking President Xi Jinping. Ding Lingjie had uploaded the video online and shared it through social media. Wang Fengxian’s role is unclear other than her relationship to her mother. Police detained all three of them in September 2017, in the run-up to the Chinese Communist Party’s 19th Congress in October. Police refused to allow Ding’s lawyer to meet with her until after she had been formally arrested in November 2017. Ding is being held at Shijingshan Detention Center. Before being taken into custody, Ding had been volunteering as an editor with the human rights NGO Civil Rights & Livelihood Watch, whose founder, Liu Feiyue (刘飞跃), has been detained since November 2016.

Guluo District Court in Xuzhou City put activist Zhang Kun (张昆) on trial on December 28 on charges of “picking quarrels and provoking trouble.” The trial ended without a verdict. Xuzhou police initially detained Zhang on May 27, 2017 after he publicly asserted he had been tortured while previously imprisoned in the city. Zhang, born in 1987, joined the “New Citizens’ Movement” in 2013 and began taking part in protests calling for government transparency, rule of law reform, and constitutionalism. As a result, Xuzhou police detained him on “picking quarrels” charges on May 24, 2014 and Xuzhou Intermediate Court sentenced him to 2 years in April 7, 2015. After being released in April 8, 2016, Zhang alleged he had been tortured by guards while imprisoned at Pengcheng Prison. After, he publicised his allegations online, police detained him again, initially on a 10-day administrative detention for “slander” on January 26, 2017, before criminally detaining him in May when he persisted in speaking out. Zhang has been granted access to lawyers while held at Xuzhou City Detention Center.

Lawyer Liu Zhengqing Likely To Be Disbarred in Retaliatory Disbarment

Guangdong Judicial Bureau notified human rights lawyer Liu Zhengqing (刘正清) on December 25 that he is to be disbarred on the grounds that his defence statements “endangered national security” and “slandered” the state, in a clear act of reprisal for his role as a lawyer. Authorities held the hearing on January 5; Liu refused to attend, but the hearing proceeded without him. No ruling was announced at the end. Liu is allowed to appeal the ruling, but appeals in political cases are rarely successful. The bureau cited as “evidence” his defence statements for his clients, human rights activist Zhang Haitao (张海涛) in 2016 in Urumqi, Xinjiang and Falun Gong practitioner Li Yanming (李艳明) in 2017 in Foshan, Guangdong. Liu has also faced reprisals for representing human rights defender Huang Qi (黄琦); In October, Guangzhou judicial officials sent Liu a notice stating that he was under investigation for giving Huang cigarettes during a meeting. Authorities have targeted Liu and other human rights lawyers in a new wave of suppression using draconian administrative measures for lawyers and law firms, enacted in November 2016 as legal justification.

On December 28, Penglai City Court in Shandong, in a long-delayed prosecution, reportedly sentenced officials involved in the killing of petitioner Li Shulian (李淑莲) in a “black jail” in 2009. However, authorities continued to perpetuate the cover-up of her death, ignoring signs that she had been beaten and asserted that she hung herself. The seven officials involved were only charged with “illegal detention” and not the more serious crime of “intentional injury” leading to Li’s death. The seven officials, from Longkou City local government and public security bureau, received prison sentences ranging from 8 years to 6 months, with one official receiving a 3-year sentence suspended for 3 years. Li’s daughter Li Ning ( 李宁) is largely responsible for the case eventually reaching the courts, having spent the past 9 years petitioning for justice for her mother. Li Ning’s case had even been highlighted in state media. Authorities, however, barred her from attending the hearing. According to Li Ning, the light sentences for the perpetrators were based on fraudulent evidence or the courts disregarded basic facts. Li and her family have faced detention and harassment as a result of their efforts to seek justice.