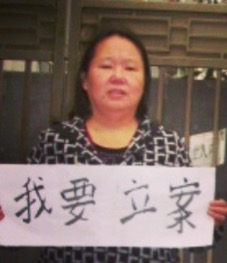 The Chinese government is apparently punishing Chen for exercising her right to freedom of expression and peaceful assembly. Chen has been a vocal human right advocate using public protests and litigation to battle social injustice in Shanghai. Authorities have blocked her from travelling to attend international human rights trainings or conferences outside China. Over the past decade, she has been a frequent target of forced eviction, police harassment, detention, and torture.

Shanghai police initially seized Chen Jianfang and her husband on March 20 from their home and they vanished into police custody for several months. Police formally arrested her on charges of “subversion of state power” on May 22, though that information was not made public until October, while he was released on bail on April 3. Shanghai No. 1 Procuratorate indicted Chen Jianfang on August 30, 2019 on charges of “subversion of state power,” one of the most serious political charges in China’s criminal code that carries a potential life sentence. Chen’s case has been transferred to Shanghai No. 1 Intermediate Court. Chen is awaiting trial at Shanghai Detention Center.

Just days before police seized Chen, she wrote an essay paying tribute to activist Cao Shunli (曹顺利) to mark the fifth anniversary of Cao’s death in custody on March 14. On the same day, several UN independent human rights experts released a statement, renewing calls for an investigation into Cao’s death.

Chen has been denied the right to a fair trial. She has not been allowed a single meeting with the lawyer of her choice throughout her detention since March. It is unclear if she has received any legal counsel in custody. Chen was subjected to months of enforced disappearance. Nothing is known about her condition at the detention center. Torture is rampant in Chinese detention facilities and Chen is at high risk of torture.

In August, four UN human rights experts wrote to the Chinese government expressing concern over the arbitrary detention and enforced disappearance of Chen Jianfang, the denial of access to her lawyer and family, and concern over her treatment in custody. The UN Secretary-General also raised her case in his annual report on cooperation with the UN and its mechanisms (the ‘reprisals report’), published in September 2019

Chen Jianfang’s indictment follows a recent uptick in the Chinese government’s harsh persecution of human rights defenders in China. The latest escalation is marked by the serious political crime authorities have used against detained HRDs: “subversion of state power.” In July, Hunan police seized three anti-discrimination and health rights NGO workers and arrested them the next month on “subversion” charges. Cheng Yuan, Liu Dazhi, and Wu Gejianxiong have not been granted access to legal counsel and the reasons for their detention are unknown but may be related to their NGO, Changsha Funeng, receiving overseas funding. While the charge of subversion has been used against HRDs in the past, such as democracy dissident Qin Yongmin (秦永敏) or lawyers in the 2015 “709 Crackdown,” the use of this crime in relation to HRDs promoting social, economic and cultural rights by exercising their civil political rights heightens the risks for these defenders. Since 2013, Xi Jinping drastically shrunk the space for activists and NGOs to advocate environmental, housing, land, labor, public health, and disability rights, and to eliminate discrimination. The Chinese government has taken a step further to punish human rights defenders as “enemies of the state.”

In a recent opinion, the UN Working Group on Arbitrary Detention found that the Chinese government’s frequent use of the crime of “subversion of state power” (art. 105, Criminal Law) to persecute peaceful dissent and rights advocacy is “neither necessary to protect public or private interests against injury nor proportionate to guilt. Punishment should fit the crime, not the criminal.” The same Working Group has also reminded the Chinese authorities repeatedly, in official Communications, that under certain circumstances, widespread or systematic and arbitrary deprivation of liberty may constitute crimes against humanity.

We call on the Chinese government to immediately and unconditionally release Chen Jianfang, Cheng Yuan, Liu Dazhi, Wu Gejiangxiong and all other human rights defenders detained in retaliation for exercising their rights.

FIDH, in the framework of the Observatory for the Protection of Human Rights Defenders