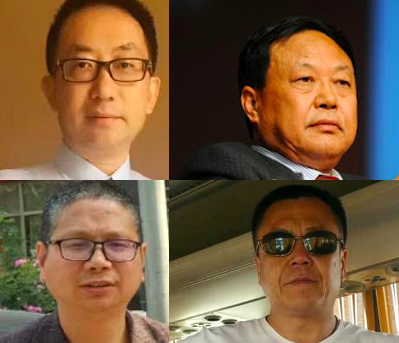 CHRD is hiring a full-time researcher! See the listing on our website.

Activist Zhou Weilin (周维林) went on trial on charges of “picking quarrels and provoking trouble” on November 20, 2020 in a closed-door hearing at Feidong County Court in Anhui Province. Guards blocked the entrance to the courthouse and lawyers Liang Xiaojun (梁小军) and Wu Li (吴莉) had to be escorted inside by the trial judge. The court refused to allow Zhou’s supporters inside to observe or testify in his defence. Zhou and his lawyers were allowed to speak during the trial. The hearing ended without a sentence being pronounced. The charges against Zhou are related to his comments on Twitter and for writing articles for the human rights website Rights Defence Network (维权网). Police initially detained Zhou on March 12, 2020 and he has been held at Feidong County Detention Center.

On November 10, 2020, Beijing No. 2 Intermediate Court convicted activist Zhang Baocheng (张宝成) of “picking quarrels and provoking trouble” and “promoting terrorism, extremism, and inciting execution of terrorist activities” and handed down a 3.5-year prison sentence; three years for the “picking quarrels” charge and 8 months for the terrorism charge. The sentencing hearing followed an August 18 trial. Zhang appealed against his conviction on November 16. The court convicted Zhang of using the Internet, especially Twitter, to send out or share videos and information that “smear and insult the country’s leadership, oppose the Communist Party, split the state, harm ethnic unity and insult judicial organs.” One type of post cited included Zhang raising awareness of the plight of imprisoned activist Huang Qi’s elderly mother Pu Wenqing. Zhang was convicted of sending 1 video about East Turkestan (Xinjiang) which authorities said touched on “violent terrorism and extremism.” Beijing police initially seized Zhang on May 28, 2019, ahead of the 30th anniversary of the Tiananmen Massacre. He was not granted access to his lawyers until October 2019. Zhang Baocheng is currently being detained at Beijing No. 3 Detention Center and is expected to be released in November 2022.

Guangzhou National Security Bureau officers reportedly detained four democracy activists on November 12, 2020 on suspicion of “subversion of state power.” Those detained are: Fan Yiping (范一平); Fan Wencheng (范文成); Lai Jianjun (赖见君); and Qiao Lianhong (乔连红). Very little information about the case is known, including the reasons for their detention. The only detention which has been confirmed is Lai Jianjun, who was placed under “residential surveillance at a designated location” on November 13, 2020 by Guangzhou National Security Bureau on suspicion of “subversion of state power.” His wife received the RSDL notice. The status of the other two are unknown; Qian Lianhong was released. Fan Yiping is an activist who was prominent during the Democracy Wall period of the 1970s and spent 3 years in prison for helping activists Wang Bingzhang (王炳章) and Wang Xizhe (王希哲).

On November 11, 2020, police officers from Gaobeidian City, Hebei Province detained billionaire entrepreneur Sun Dawu (孙大午), his family and over 20 senior executives of his company Hebei Dawu Agricultural and Animal Husbandry Group on suspicion of “picking quarrels and provoking trouble” and “sabotaging production and business operations.” Authorities said they had been placed under “criminal coercive measures” but did not specify which ones. Their detentions come after an August clash between Dawu group staff and a nearby state-owned farm which was broken up by police. However, Sun Dawu was also known for his outspokenness online, which is likely part of the reason for his detention. In May 2020, he publicly praised prominent legal scholar and activist Xu Zhiyong, who was detained in February 2020, and the work of human rights lawyers in helping victims; and in October he gave a critical interview about the government to Radio Free Asia. In 2003, Sun was convicted of “illegal fundraising” after he solicited money for his business from friends and neighbors. Xu Zhiyong was his lawyer in the 2003 case.

Chongqing No. 1 Intermediate Court sentenced businessman Li Huaiqing (李怀庆) to 20 years in prison on November 20, 2020 on charges of “inciting subversion of state power,” “fraud,” “extortion,” and “illegal detention.” The trial was held on June 8, 2020. Li had initially been seized on January 31, 2018 in retaliation for posts on his WeChat. Police detained him and his wife, children, and employees on suspicion of “gang involvement” and police froze all of his asserts in the name “cracking down on gangs.” Prosecutors later changed the charge to “inciting subversion.” According to the indictment, they accused him of “spreading rumors and slander” on WeChat between October 2017 to January 2018, including reposting articles like “Fourth Red Army Killed Millions in Sichuan” and reposting recordings with phrases like “moral resistance” and “violent revolution.” Li’s family and lawyers never received any written detention or arrest notices. He is currently being held at Chongqing Jiangbei District Detention Center. The harsh sentence against Li Huaiqing is part of a recent government crackdown on powerful entrepreneurs in the private sector, or increasingly independent business leaders in state sector, such as Ren Zhiqing, Geng Xiaonan, and the above case of Sun Dawu.

The Hong Kong government disqualified four pro-democracy legislators on November 11, 2020, after the Standing Committee of the National People’s Congress passed a resolution earlier that day stating that Hong Kong lawmakers who promoted or supported Hong Kong independence and refused to admit Beijing’s exercise of sovereignty over the city should be considered in breach of their oath of allegiance to Hong Kong Special Administrative Region.

The ruling also claimed that those who appealed to foreign or overseas forces to interfere with Hong Kong’s affairs and those engaged in other acts endangering national security would also not meet the loyalty requirement. To protest against the decision, other 15 pro-democracy legislators resigned from the legislature on the next day.

About 40 plainclothes officers from Hong Kong’s national security police department entered the campus of the Chinese University of Hong Kong (CUHK) on November 20, 2020. The police had been called by the university to investigate a peaceful protest held by over 100 graduating students the previous day. The protesters raised banners, flags and chanted, some with the slogans “Hong Kong, the only way out” and “Liberate Hong Kong, the revolution of our times” which were considered pro-independence by the university. The annual graduation Congregation was originally scheduled to take place on November 19, but the university administration changed the ceremony to an online event. The students called for a rally at the campus that day to show support to the pro-democracy movement and the 12 Hongkongers detained in the Shenzhen after trying to flee to Taiwan.

On November 20, the Hong Kong police suddenly arrested 64-year-old protester Alexandra Wong on a charge of “common assault” for pushing a court security officer in Admiralty last year. As she fell sick, she was admitted to a hospital and her court appearance was rescheduled. Wong is known as “Grandma Wong” and had been frequently seen at protests in 2019 holding the British flag. She lives in Shenzhen and was detained in mainland China last year, only returning to Hong Kong in October. Police arrested Wong Yiu-sing, widely known as “Giggs”, a program host for internet radio D100, and his wife at their home on November 21, 2020, on suspicion of “money laundering” and “aiding secession” under the National Security Law in relation to a funding campaign for young protesters to leave Hong Kong and study in Taiwan. On November 22, the police arrested Yuen Long District Councillor Henry Wong Pak-yu, Kowloon City District Councillor Timothy Lee Hin-long and a third unidentified suspect for “conspiracy to defraud” nearly HK$5 million of expenses tied to the now-delayed Legislative Council election.