January 6, 2021       Comments Off on Detainees Rushed to Trials During Holiday Season in Apparent Attempt to Evade Scrutiny 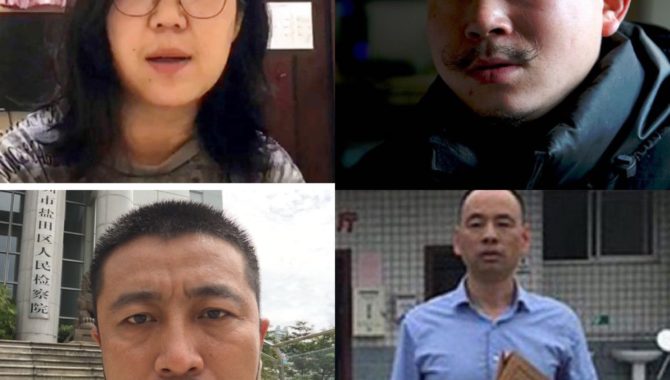 Shanghai Pudong New District Court tried and convicted citizen journalist Zhang Zhan on December 28, 2020 on a charge of “picking quarrels and provoking trouble” and sentenced her to four years in prison. The court denied Zhang the right to a fair trial and did not allow any cross-examination of the evidence against her. The verdict claimed that she posted false information about the coronavirus epidemic in Wuhan in February on WeChat, Twitter, and YouTube. Zhang Zhan has been on a hunger strike for months and her health has seriously deteriorated as authorities subjected her to force feeding, a form of torture. The imprisonment of Zhang Zhan deals another blow to independent reporters exercising their right to free expression and press in China. The UN Office of the High Commissioner for Human Rights denounced the verdict and called for her release.

On December 30, Shenzhen Yantian District Court convicted 10 Hong Kong protesters for trying to flee Hong Kong in August 2020. The sentencing hearing follows a closed-door trial held on December 28, in violation of their right to a fair trial. Despite claiming it was open to the public, diplomats and foreign media reporters were refused entry and the families were not provided with information about the trial nor were they allowed to attend. Shenzhen authorities did not grant the detainees a single meeting with the family-hired lawyers and they were reportedly forced to accept government-appointed lawyers. Shortly after the hearing, two of the family-hired lawyers, Lu Siwei and Ren Qianniu, received notices that authorities intended to revoke their licenses. China Coast Guard detained 12 Hongkongers on August 23 and authorities formally arrested them on September 30. 2 minors in the group were returned to Hong Kong, in police custody. The 10 are being held at the Yantian District Detention Center in Shenzhen.

The details of the sentences are below:

Artist Liu Jinxing (刘进兴) received a 20-month prison sentence on a charge of “picking quarrels” on December 17, 2020. The Xuanwu District Suojin Village Court in Nanjing held a sentencing hearing after a trial in August. Nanjing police first detained Liu, also known as “Chasing Souls” (Zhui Hun 追魂), on May 28, 2019, along with five other artists. They had planned a “Chinese Prisoners of Conscience” exhibit tour, with paintings to be displayed in cities in three provinces, to mark the 30th anniversary of the Tiananmen Massacre. Liu was known for using money from art sales to help individuals detained for their political expression. His support for prisoners of conscience was cited as “evidence” of criminal activity in the verdict. Authorities denied Liu access to his lawyers for six months in 2020 during the covid pandemic and his August trial was held via video link. Liu is currently held at Nanjing City No. 3 Detention Center and is expected to be released on January 28, 2021 at the completion of his prison sentence.

Golog Tibetan Autonomous Prefecture Intermediate Court sentenced Tibetan Lej Dorje (勒智多杰) to 1 year in prison on December 14, 2020 on charges of “inciting separatism.” The prosecution accused Lej Dorje, 30, of using social media to share messages about the Tibetan Government in Exile and the Dalai Lama in 2019-2020 on Weibo and WeChat. Qinghai police initially detained him on July 14, 2020 and formally arrested him on July 23, 2020.

Hong Kong activist Tony Chung (鍾翰林) received a four-month prison sentence on December 29, 2020 upon his conviction for “unlawful assembly” and “desecrating the national flag” during a protest on May 14, 2019. The magistrate said Chung, 19, had risked provoking a crowd of government supporters by snatching a national flag from a group of bro-Beijing protesters and throwing it into the air. Chung has been in detention after being denied bail as authorities cited that the charges against him—“secession,” “money laundering,” and “sedition”—fall under the new National Security Law.

Activist Xu Kun (徐昆) went on trial on December 23 on a charge of “picking quarrels” at the Panlong District Court in Kunming. His family only received notification of the trial at 10pm the night before. Prosecutors accused Xu of sending a large number of tweets that “slandered, insulted, subverted and attacked” the country and national leaders. The trial ended without a verdict. Kunming police initially detained Xu in August 2019 when he travelled to try and attend the trial of another human rights activist. Police put him under administrative detention before criminally detaining him on September 1, 2019, and then formally arrested him on September 30. Authorities repeatedly denied Xu’s access to his lawyers. A trial originally scheduled for August 2020 was cancelled. Xu Kun is a member of the loose grouping of activists called the “Rose Group,” founded by dissident Qin Yongmin, who is serving a 13-year prison sentence. The case against him may also be in retaliation for his support of Qin. Xu Kun is being held at Panlong District No. 2 Detention Center in Kunming.