October 15, 2013       Comments Off on CHRD Suggestions for UPR Recommendations to China 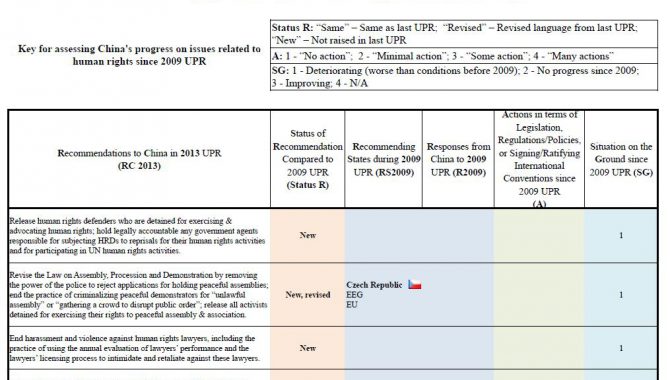 (Chinese Human Rights Defenders, October 15, 2013) – In the run-up to the Universal Periodic Review (UPR) on China at the UN Human Rights Council (HRC) on October 22, 2013, CHRD suggests governments of UN member states participating in the review make robust, specific, and relevant recommendations to China. CHRD-suggested recommendations include, but are not limited to:

The Chinese government has repeated its vow to “promote and protect human rights and fundamental freedoms of the Chinese people” in its 2013 “voluntary pledge,” which China submitted to the president of the UN General Assembly in announcing its candidacy (in June 2013) for membership in the HRC for 2014-16. However, the Chinese government has not honored these “pledges,” and has taken little action to implement the recommendations that it “accepted” since the first cycle of the UPR on China’s human rights record before the HRC in 2009.

In some key areas of human rights in China, we have witnessed a downward spiral since 2009. One such area is freedom of peaceful assembly, association, and expression, including in Tibetan regions and Xinjiang, where there have been several harsh clampdowns on these rights. The current crackdown has seen many civil society activists across the country detained or criminally charged for exercising their rights to peaceful assembly, association, and expression. Meanwhile, the government has aggressively excluded civil society activists from playing a role in UPR, and in some cases has criminalized those who demanded the government allow their participation in the drafting of the national human rights report to UPR. 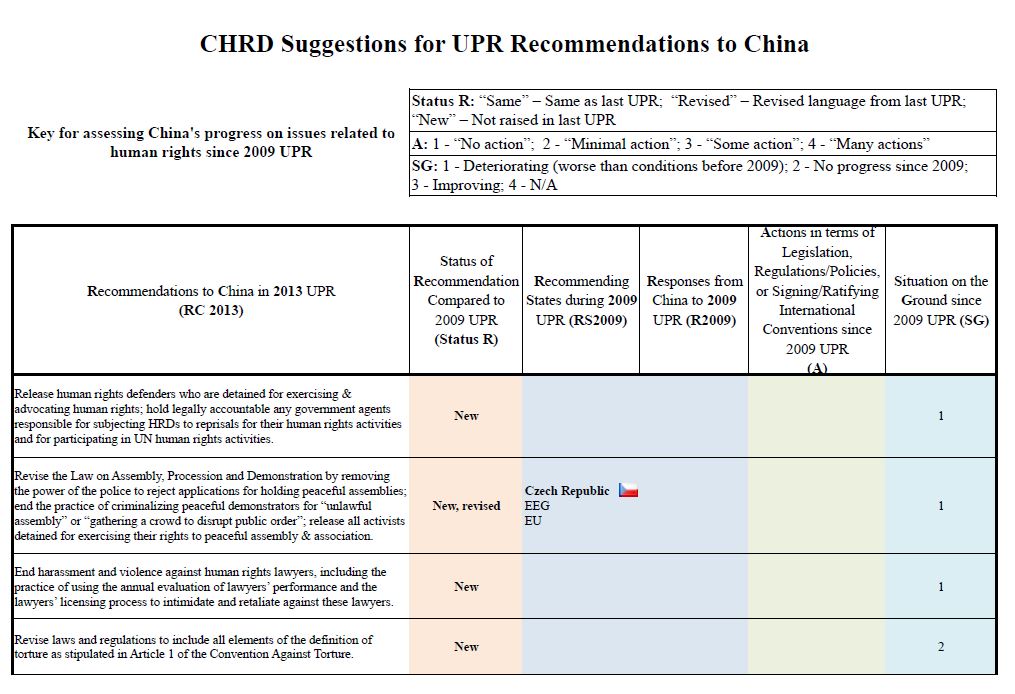 The list of CHRD’s suggested recommendations includes an assessment of current conditions of a range of human rights issues.

CHRD is also taking this opportunity to release its report submitted in January 2013 to the Human Rights Council for the 2nd cycle of Universal Periodic Review on China.

Though in 2009 China rejected almost all of the recommendations (or similar ones) on our list of suggestions, we are not discouraged by the prospect that China will reject them again. We have observed some actions taken by the government since the prior UPR in areas where they rejected recommendations that urged action and reform. For instance, there has been official discussion about phasing out the Re-education through Labor (RTL) system of detention, and the amended Criminal Procedural Law has incorporated language prohibiting the use of torture to extract confessions. While RTL has not been officially abolished and torture remains prevalent in detention centers, such abuses are now more open to challenge in public discourse and Chinese courts. These examples indicate that, even as China rejected many of the 2009 UPR recommendations, they have likely played some role in pressuring the government to take steps toward some considerations for reforms in limited areas.

The UN member states that will be reviewing China on October 22 must refrain from making weak, vague, or indirect recommendations for the purpose of increasing the chance that China might accept them. It is now clear that this is misguided since China has not even implemented recommendations that it accepted in 2009.  It might be the case that China is more likely to accept weak and vague recommendations, but such an acceptance would be obtained at the cost of lowering international standards of human rights. Robust and specific recommendations, though likely to be rejected by China, provide clear and concrete yardsticks against which the international community and Chinese civil society can measure the discrepancy between the Chinese government’s performance and international standards. If the government continues to reject many recommendations aimed at ending its rights violations and changing its abusive policies, such a response from China only contradicts the government’s own “voluntary pledge” to “promote and protect human rights” and exposes its insincerity in “cooperating” with the Human Rights Council.

Furthermore, robust and specific recommendations, even if rejected by a government under review, provide additional tools for civil society advocacy. For example, the 2009 recommendation to ratify the ICCPR, which was rejected by China, has nonetheless inspired civil society activists, who have openly campaigned to demand the government to ratify ICCPR, though some activists were subsequently detained because they made such an open call.

The purpose of UPR, as stated by the UN Secretary-General Ban Ki-moon, is to “promote and protect human rights in the darkest corners of the world.” Uncompromising recommendations help identify the darkest corners. If reviewing states sought to avoid uncomfortable and unpleasant moments for governments of states under review, the UPR would deteriorate into a meaningless exercise, losing its potential to improve the effectiveness of the UN human rights mechanism.

Related CHRD publications for the assessment of China’s implementation of UPR recommendations since 2009:

CHRD, In the Name of “Stability”: 2012 Annual Report on the Situation of Human Rights Defenders in China, March 15, 2013, https://www.nchrd.org/2013/03/in-the-name-of-stability-2012-annual-report-on-the-situation-of-human-rights-defenders-in-china/.

CHRD, “We can dig a pit and bury you alive” Annual Report on the Situation of Human Rights Defenders in China, 2011, https://www.nchrd.org/2012/03/09/we-can-dig-a-pit-and-bury-you-alive-annual-report-on-the-situation-of-human-rights-defenders-in-china-2011/.

CHRD, “Issues and Cases CHRD Recommends the Committee against Torture Include in its List of Issues for the Chinese Government to Address in its Fifth Periodic Report,” September 8, 2010, https://www.nchrd.org/wp-content/uploads/2010/09/Issues-and-Cases-CHRD-Recommends-CAT-Include-in-its-LOI-for-China.pdf.

CHRD, Report on Rights of the Child in China: “‘Flowers of the Country’: Mistreated and Abused,” September 3, 2013, https://www.nchrd.org/2013/09/chrd-releases-report-on-rights-of-the-child-in-china-flowers-of-the-country-mistreated-and-abused/.