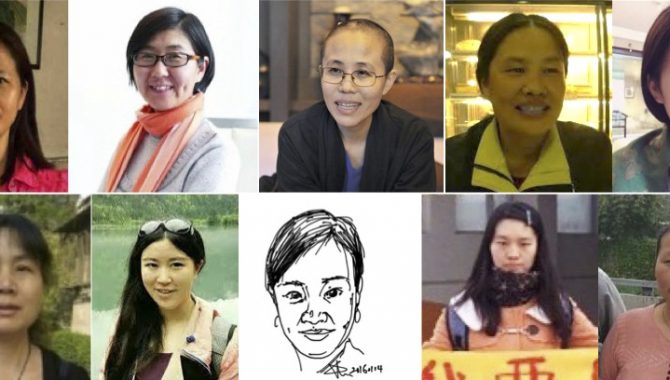 Join CHRD’s campaign calling for the release of Chinese women human rights defenders who remain detained and imprisoned on this year’s International Women’s Day. They have been subjected to government retaliation for their defense of women’s rights, housing and land rights, rule of law, and the exercise of their rights to free assembly, association, and expression. We have featured these women on our Twitter and Facebook accounts. CHRD encourages you to join our call for the release of these women and other prisoners of conscience, and help spread the message.

Chinese women HRDs currently deprived of their liberty in reprisal for their advocacy work include:

The tightening of civil society space under President Xi Jinping has led to setbacks for female empowerment and gender equality, despite some positive steps the government has taken to try to protect women, such as the recently enacted domestic violence law. One year ago, five female activists associated with NGOs focusing on women’s rights and LGBT issues were criminally detained just as they prepared to launch a public campaign against sexual harassment to coincide with International Women’s Day. Though released from detention, the women—known as the “Five Feminists”—have been living under restrictive bail conditions since April 2015, as they are still considered “criminal suspects.” Authorities have also targeted NGOs working on women’s rights issues, which before had been relatively unscathed by crackdowns on civil society; police forced the closure of the Weizhiming Women’s Center in Hangzhou in June 2015 and the Beijing Zhongze Women’s Legal Counseling and Service Center in January 2016. In cases documented by CHRD, women HRDs accounted for 354 cases of deprived liberty in 2015, more than half of all such cases recorded for the entire year.

CHRD calls on the Chinese government to allow room for civil society to promote human rights, including by ending reprisals against women HRDs and all those who strive to protect the rights of women.

Read more about the Chinese government’s record on women’s rights:

Portrait of a Defender: Cao Shunli (曹顺利) & Her Legacy