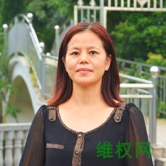 Cao Shunli died on March 14, 2014, after being held in detention for five months and denied adequate medical treatment. Police seized her on September 14, 2013, as she was boarding a flight to Geneva, where she was to attend a session of the UN Human Rights Council (HRC) and an international human rights training. Starting in 2008, Ms. Cao had worked to push Chinese authorities, without success, to allow civil society participation in drafting China’s National Human Rights Action Plans and its state reports for China’s first and second Universal Periodic Review at the UN HRC. She faced reprisals as a consequence of her role in such efforts.

This year’s honoree, Su Changlan, 45, is a leading human rights activist based in Guangdong Province. Born in the neighboring province of Guangxi, Su was an elementary school teacher for over a decade before being fired in retaliation for her rights activism in the early 2000s. She taught herself law and, in 1999, began to aid a group of rural women seeking land rights protection in Sanshan Village in Nanhai City, Guangdong. Acting as a citizen lawyer, Su provided advice to these women and helped them file lawsuits, appeals, and complaints in order to seek redress, resulting in some women obtaining financial compensation. At the core of this advocacy, Su was battling discrimination in China’s legal system against married rural women, who often lose their land use and inheritance rights in their home villages and do not gain such rights in their husbands’ family villages. In its 2014 review of China’s treaty obligations, the UN Committee on Elimination of Discrimination against Women recommended China provide equal protection to rural women’s land rights.

“Su Changlan can’t just stand aside when she sees injustice. Thanks to her work promoting women’s and children’s rights, people inside China have a deeper understanding of these issues. The actions that she’s taken, like filing complaints and using legal documentation, form a clear template for rights advocacy.” – Chinese human rights activist

By 2004, Su had become a highly influential human rights defender in rural Guangdong villages due to her defense of land rights, mobilizing farmers to stand together and holding the state accountable for the lack of equal protections of rural residents. Su also branched out to fight a broader range of rights violations. She took on the trafficking of women and girls and exposed the practice of men buying young girls and “raising” them to be their wives. In addition, she has been involved in bolstering villagers’ self-determination via local elections, railing against bribery in rural areas and the illegal sale of election votes. In one case, Su helped to defeat government-favored candidates in a village election in Foshan City, Guangdong, and through this democratic process, residents broke down the local government’s control over their lives. She has worked to galvanize human rights defenders in and around Guangzhou and hosted gatherings of fellow activists at her home.

Guangzhou police seized Su on October 27, 2014, after she had expressed support for the pro-democracy protests in Hong Kong. Since then, the government’s treatment of her has been marred by deprivations of her legal and due process rights, including secret detention, denied legal counsel, prolonged pre-trial detention, and delayed announcement of a trial verdict. After months of failed requests to see Su, her husband and brother began to protest in February 2015 in front of a police station, holding banners that said, “Conscience is not violence; Su Changlan is innocent.” For this behavior, both men were criminally detained for nearly a month. Her lawyer was only able to finally meet with Su in May 2015. After Su had been held for over a year, the Foshan City People’s Procuratorate indicted her for “inciting subversion of state power” on November 13, 2015. She was put on trial on April 21, 2016, by the Foshan City Intermediate People’s Court, which, nearly a year later, still has not announced a verdict.

The UN Working Group on Arbitrary Detention issued an opinion in December 2015, declaring Su Changlan’s detention “arbitrary” and calling on the Chinese government to release and compensate Su for unlawfully restricting her liberty. To this day, however, Su remains held at Nanhai District Detention Center.

“Su Changlan knew that she might lose her freedom, but she kept fighting for land rights and supporting the democratic movement in Hong Kong. She said in her own defense at trial, ‘I deeply love China and all its citizens,’ but she’s understood that some people must make sacrifices if they hope to bring about changes in the country.” – Chinese human rights activist

Su Changlan’s health has worsened in detention due to a lack of medical treatment, a form of torture commonly used against incarcerated human rights defenders in China. Su is suffering from heart arrhythmia and tremors in her hands and feet because of denied and inadequate care for hyperthyroidism, which can be fatal if not properly treated. One of her lawyers has revealed that Su has been hospitalized at least a half dozen times due to eczema caused by poor conditions in detention, most recently in August 2016. Authorities have denied multiple requests by her lawyers for Su to be released on medical bail.

The Cao Shunli Memorial Award acknowledges the efforts of human rights defenders in China who have demonstrated a deep commitment to promoting human rights, typically in the face of great personal risk. The award honors those who continue Cao’s work and recognizes engagement in human rights initiatives focusing on protecting vulnerable groups, including activities that push for civil society participation in international human rights mechanisms and efforts to monitor the Chinese government’s implementation of its human rights obligations. The award includes prize money to support ongoing initiatives or otherwise assist the recipient. The award has been announced annually on March 14, the anniversary of Cao’s death from torture in detention, and a date that some Chinese activists have designated “Human Rights Defenders Day” in her memory. In 2015, disability and labor rights activist Zhou Weilin (周维林) was the first recipient of the award, and imprisoned housing rights activist Jia Lingmin (贾灵敏) received the award in 2016.

Activist Su Changlan, detained in Guangdong since October 2014, has been named the third recipient of the Cao Shunli Memorial Award.