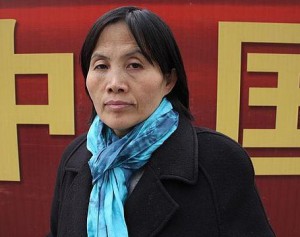 Three rights groups in China launched an annual award to support human rights work in honor of activist Cao Shunli (曹顺利), who died on March 14, 2014, after being denied medical treatment for five months in detention. Human Rights Campaign in China (权利运动), Civil Rights & Livelihood Watch (民生观察), and Rights Defense Network (维权网) will bestow an award to a Chinese human rights defender on March 14 each year, which has been designated by some Chinese activists as “Human Rights Defenders Day” to mark the day Cao Shunli passed away.

The recipient will be awarded funding to conduct human rights initiatives, especially “to push for civil society participation in international human rights activities” and to monitor the Chinese government’s implementation of its human rights obligations. In a joint announcement, the three NGOs said that the award will “commemorate Ms. Cao Shunli, so her life’s story will inspire generations to come.”

Li Yufeng, 63, human rights defender, is currently detained by the Chinese government for her rights advocacy.  Li began petitioning in the early 2000s, seeking legal accountability for the forced eviction and demolition of her home by government backed developers. The obstacles she encountered and the punishments she experienced over the years led her to join and support actions with other victims and activists to seek justice. Li actively campaigned for the abolition of “re-education through labor”, a  now-defunct system of administrative detention. Li has annually memorialized the victims of the 1989 Tiananmen Massacre.

Li Yufeng was seized by police in October 2015 and criminally detained on suspicion of “gathering a crowd to disrupt order of a public place” and subsequently arrested in a clear act of reprisal for her human rights advocacy work. Li was tried in closed-door proceedings and sentenced to 4-year in January 2017. Li was released in February 2019. But soon after, in July 2019, police detained Li again at Jiaozuo Detention Center in Henan Province to punish her for carrying on rights advocacy.

Li Qiaochu, 30, has long been a human rights advocate against gender-based violence, an advocate for labour rights, and for the building of civil society more broadly. Ms. Li graduated from Renmin University, and earned a master’s degree in public policy from the University of York in England in 2015. She went back to China to work as a research assistant at Tsinghua University.

Li Qiaochu is currently detained at the Linyi City Detention Center in Shandong, after police took her into custody on February 6, 2021. Li Qiaochu had posted many tweets to expose details of torture of detained legal advocate Xu Zhiyong and lawyer Ding Jiaxi. Li Qiaochu is likely targeted in retaliation for her engagement with UN human rights mechanisms.

Zhang Jianping (张建平), 53, is a human rights activist based in Changzhou City, Jiangsu Province. Zhang was paralysed in a car accident in July 1997 and is wheelchair-bound. Zhang began to petition (file grievances with government officials) after he encountered legal injustices in seeking redress for personal injury from the accident. This experience started him on the path to promote human rights, as he began to realize that systemic problems have led to the denial of rights of marginalized people, including persons with disabilities.

Zhang has been active in monitoring human rights abuses and engaging in rights advocacy since 2006. He volunteered as a citizen journalist with “64 Tianwang,” the civil society organisation founded by Huang Qi. After Huang’s second arrest following rescue activities tied to the 2008 Sichuan earthquake, Zhang reported for different rights monitoring websites. He has worked with members of disadvantaged social groups, representing victims of rights abuses and acting as their citizen-lawyer in administrative lawsuits cases against corrupt and abusive officials, seeking government information disclosure, and speaking out in support of prosecuted human rights defenders.

Wang Heying (王和英), 47, born in Shandong, is a rights defender now based in Jiangsu. She fought for redress after becoming a victim of land grabs and forced housing eviction by local government officials in the early 2000s without compensation, and encountered injustice and retaliation. She then began participating in human rights advocacy campaigns and helping other victims of rights abuses.

Ji Sizun, based in Fujian Province, has defended the rights of disadvantaged groups for years by providing legal aid and offered legal training. In 2008, police detained Ji after he applied for a permit to demonstrate in an official Beijing Olympics “Protest Zone.” For this activity, he was convicted and sentenced to three years in prison on charges of “forging official documents and seals.” After his release from prison, Ji continued to promote legal education. In 2014, police seized Ji and charged him with “gathering a crowd to disrupt order of a public place” and “picking quarrels and provoking trouble” for helping petitioners to organize two protests in August and September 2014. A Fujian court put Ji on trial on December 2015 and convicted him in April 2016, handing down a 4.5-year prison sentence. Ji Sizun’s health seriously deteriorated during his incarceration, and he suffered a debilitating stroke in 2016 and had not received sufficient medical treatment for a number of severe health conditions. He will be released from Putian Prison in Fujian Province on April 26, 2019.

Chen Jianfang has engaged in human rights activism for the past decade. Formerly a farmer, Chen began defending land and housing rights after she and her family lost land to government-backed developers. She went on to expand the scope of her advocacy, exposing systemic causes of rights abuses and the Chinese government’s persecution of human rights defenders. Chen Jianfang worked closely with Cao Shunli in efforts to participate in national-level consultation with civil society for China’s 2009 UPR. In September 2013, authorities stopped Chen from boarding a flight to attend a human rights training and observe a HRC session in Geneva—on the same day when Cao Shunli was abducted by police while heading to the same program. Police forcibly returned Chen to Shanghai, where she was detained, interrogated, and closely monitored. Chen’s advocacy has put her at constant risk of retaliation by authorities, including intimidation, physical assault, and arbitrary detention.

Li Xiaoling has undertaken human rights advocacy and provided support to persecuted defenders since 2012. Once a successful businesswoman, Li turned to human rights work after she encountered obstacles in her efforts to expose judicial malfeasance in a legal case involving a personal tragedy. Li has vigorously advocated for the rights of marginalized social groups and victims of government persecution, while speaking up in exposing human rights abuses by authorities. Li Xiaoling was detained in 2017 on the 28th anniversary of the Tiananmen Massacre, and formally arrested in September of that year on suspicion of “picking quarrels and provoking trouble.” Authorities added a “state secrets” charge in November 2018, before swiftly trying and convicting her in a secret hearing. Li was released in December 2018 on a three-year prison sentence, suspended for five years.

Su Changlan, a leading activist based in Guangdong Province, began her rights advocacy work while still an elementary school teacher. While teaching herself law, she helped married rural women seek justice for deprived land rights, and later went on to fight for the rights of trafficked women and girls and to promote fair elections in rural villages. Su was detained in October 2014 after expressing support for the democracy protests taking place in Hong Kong, and eventually convicted of “inciting subversion of state power.” Her case has been replete with deprivations of her due process and legal rights.

Jia Lingmin was a middle school teacher in Henan before she became an activist following years of fighting for justice as a victim of forced demolition. While petitioning over her personal grievances, Ms. Jia soon learned to use the country’s law in seeking redress and began teaching other victims to fight for their rights through China’s existing legal system. In November 2015, a court in Henan Province sentenced her to four-years imprisonment for “picking quarrels and provoking trouble” in a case marred by the denial of her due process rights.

Zhou, whose work includes advocating for persecuted human rights defenders, was released from prison in February 2015 after he served out an 18-month sentence in Anhui Province. In announcing the award, the committee commended Zhou Weilin’s invaluable contribution to the efforts to promote human rights and hold the Chinese government accountable to its constitutional and international obligations. The committee drew parallels between Zhou Weilin and Cao Shunli’s courage and dedication in the face of ruthless government reprisal, with the hope that Zhou, who has courageously persisted in his work to defend human rights, will gain a measure of recognition and protection.