December 7, 2017       Comments Off on From Forced Evictions of Migrant Workers to Abused Children: Violations of Social & Economic Rights in China Refute the “China Development Model” 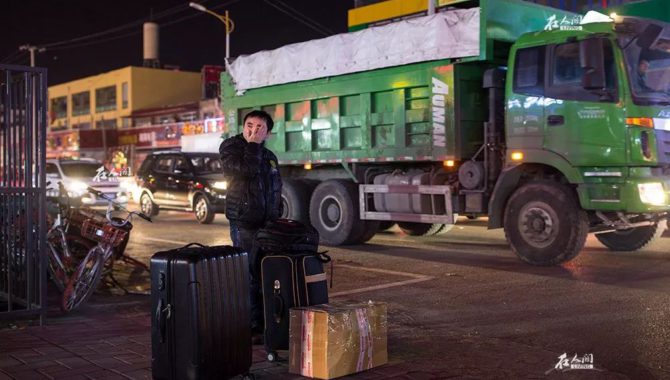 (Network of Chinese Human Rights Defenders – December 7, 2017) – Stakeholders in the international human rights community must vigilantly guard against China’s aggressive global campaign to weaken core international human rights norms, says CHRD to mark this year’s Human Rights Day on December 10. Since a major speech by Xi Jinping at the United Nations in Geneva in January 2017, the Chinese government has pushed for an alternative concept of “human rights with Chinese characteristics,” which prioritizes “development” over human rights. This indicates a marked turning point. Xi Jinping’s nationalistic campaign to rejuvenate China and build a prosperous and meticulously controlled society with no safeguards for human rights, rule of law, or social justice, has taken a turn outward, into a drive to propagate the “China model” worldwide.

In the past few decades, this “China model” has left behind countless people in China, victimized by breakneck growth at the expense of basic protection from discrimination, exploitation, and abuse of power. The most recent emblematic incidents involve hundreds of thousands of migrant workers evicted in Beijing, and kindergarteners allegedly abused at an upscale Beijing daycare center. The path of China’s “success” is littered with ruined lives. Many Chinese have lost homes, land claims, jobs, wages, and clean air and water. There is widespread discrimination against people with HIV/AIDS or hepatitis, rural migrants, women, persons with disability, LGBTQ groups, and ethnic or religious minorities.

The “secret” of the “China success” hinges on squashed protests, silenced complaints, and swollen jails and extrajudicial holding cells. Under Xi Jinping, the government has escalated suppression on civil-political liberties, closed down space for civil society, and persecuted lawyers and activists who come to the defence of victims of social-economic rights violations and assist them in seeking redress.

In his January UN speech, Xi drew on “peace” and “development” as the aspirations of mankind but he barely mentioned human rights, a glaring omission of the third pillar of the UN. In June 2017, the UN Human Rights Council (HRC) adopted for the first time a China-backed resolution on the priority of development over protection of human rights. The resolution was an attempt to reverse the working principle at the UN—that human rights are necessary for boosting sustainable development, for ensuring fair and equal participation in development and enjoyment of its fruits, and for protecting those who are victimized, marginalized, or left behind.

The Chinese Communist Party’s official newspaper People’s Daily celebrated China’s “victory” at the HRC and quoted China’s ambassador to the UN in Geneva, Ma Zhaoxu, who made it explicit that the “China proposal” was the first step toward reshaping the global governance of human rights: “the international human rights agenda has been established and led by Western countries,” who “exploit and occupy their superior position” to “vigorously spread Western human rights values,” and the HRC resolution would “smash” the West’s “monopoly” on human rights. The ideological war that Xi has waged in China, beginning in 2013, to purge “universal values” including human rights and rule of law, appears to have won its first battle at the Human Rights Council, the very body at the UN tasked to “protect and promote human rights.”

Recent Child Sex Abuse Scandal at a Beijing Daycare: Tip of Iceberg of Failing Protections for Millions of Children

The recent child sex abuse scandal at a Beijing kindergarten sparked outrage, prompting an investigation. The government’s response, however, is painfully familiar. Police quickly announced that several parents made up the claims. Authorities immediately ordered social media posts about the scandal to be censored, and state media claimed that the scandal was one isolated incident. However, the case is just the tip of the iceberg. The Chinese government has systematically failed to address the widespread problem of child abuse. In a comprehensive 2014 study for the World Health Organization, researchers found that approximately 25% of Chinese children have suffered some form of physical abuse and that almost 9% have suffered sexual abuse.

One major cause for the prevalence of child abuse traces back to China’s mass internal migration, which provided the backbone to its “miraculous” economic growth built on cheap rural labour. The rural migrants earned too little to raise their children in the cities and under China’s infamous hukou (or household registration) system, rural migrants are treated as second-class citizens in Chinese cities, discriminated against in access to education, healthcare, housing and other social services. Their “left behind” children in the villages sometimes live alone or with elderly relatives, with little parental protection, and are extremely vulnerable to abuse. China has an estimated 60 million “left-behind” children, one-fifth of the country’s children. One Chinese NGO estimates that one-third of all rural children live apart from their parents.

While the case in Beijing drew attention because it occurred at an upscale daycare in an urban area, an estimated 75% of all child sexual abuse cases in China take place in rural areas. A Chinese charity found 968 incidents of sexual assault of children reported in Chinese media from 2013-2015, involving 1,790 victims, most of whom were “left-behind” children. Due to the lack of education on sexual abuse and little knowledge on the part of victims or parents about reporting to police, the actual number of victims likely far exceeds those in the reported cases.

The lack of government transparency in China has not helped raise public awareness. The Chinese government resisted gathering and compiling data on child abuse, a necessary first step to tackling the issue, as the UN Committee on the Rights of the Child (CRC) recommended China to do in 2013. In a clear indication of the low priority given by the government to protecting children, the government still has not implemented the 2013 CRC recommendation that China “ensure that legislation relating to sexual abuse and exploitation is effectively enforced, and that perpetrators of such crimes are brought to justice with sanctions proportionate to their crimes.” CHRD reported to CRC in 2012 that child abuse, including sexual assault and corporal punishment, was prevalent in China due to inadequate legal protection and lack of accountability.

The government’s priority, instead, has been to control public outrage by blocking information, silencing its critics, obstructing victims from seeking justice, and retaliating against women’s rights activists and NGOs assisting efforts to hold alleged perpetrators accountable. Activists Ye Haiyan (叶海燕) and Shan Lihua (单利华), and human rights lawyer Wang Yu (王宇), have faced harassment and criminal prosecution after trying to draw public attention to the case of serial rape of girls, aged 11 to 14, by a school principal in 2013. Several women’s organizations that documented cases of child abuse and advocated the rights of girls have since been shut down by authorities. One such group, Beijing Zhongze Women’s Legal Counseling and Service Center, led the successful campaign to have the Criminal Law amended in 2015 to classify sexual abuse of children under the age of 14 as “rape” and not “underage prostitution.” The government forced the NGO to shut down in 2016 over suspected ties to foreign groups.

A deadly fire killed 19 migrants and their children on November 18. It set in motion a police-enforced mass eviction to throw out hundreds of thousand migrant workers from shantytown buildings into the freezing streets in the outskirts of Beijing. The incident exposed China’s failure to abolish the decades-old rural-urban discriminatory system, which has profoundly disadvantaged rural migrant workers in their access to social services including affordable housing. In the days after the forced eviction began, authorities removed Internet comments critical of the way the migrants were treated by the government. Officials directed state media to only report the government’s point of view, and censored the term “low-end population” that the government used to refer to the migrants. 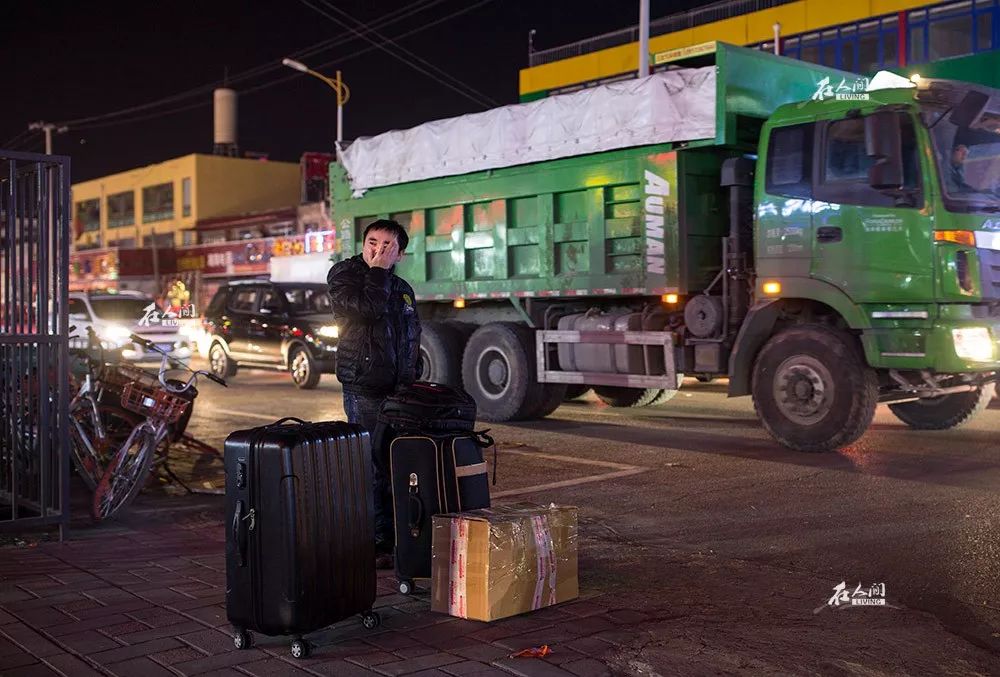 A migrant worker in Beijing who has been forcibly evicted following the deadly fire on November 18, 2017

Discrimination against migrant workers and their children is sanctioned by China’s hukou system, the official residential registration system. It segregates the Chinese population into two classes, urban and rural, and gives preferential treatment (such as vastly better access to social benefits and services) to residents with urban registration. Despite limited and experimental reform in recent years, the system remains largely in place. Discrimination continues against migrant workers with rural residential registration, who work in factories or construction sites in cities. These migrants have little or no access to or must pay more for social services and benefits that the government provides to urban residents, including health care, education, pension, and employment opportunities. According to China’s statistics bureau, in 2016, there were an estimated 281 million rural migrant workers, mostly working in manufacturing, construction, and service industries in urban areas. In Beijing, migrants make up nearly 40% of the population.

Without access to subsidized housing, migrant workers can’t afford homes in mega cities where jobs are concentrated. Chinese migrant workers earn an average salary of 3,275 RMB ($495 USD) a month, while the average rent in Beijing is 4,350 RMB ($650 USD) per month. About 60% of migrants in Chinese cities rent from private landlords as of 2016 and most of them end up in low-quality or poorly-constructed buildings that would not pass safety inspections. The migrants’ living quarters tend to be overcrowded, noisy, in damp basements, with limited air flow and unhealthy sanitation facilities. A 2016 study found approximately 1 million people in Beijing live in underground apartments; and nearly 40% of all migrants live in accommodation between 5-15 square meters (50-160 square feet) in size. Government authorities in cities like Beijing undertake “safety” campaigns to evict residents and demolish sub-standard buildings, but the government has failed to address the underlying causes that force people to live in such dangerous conditions.

China, as a State party to the International Covenant on Economic, Social and Cultural Rights, has failed to implement the Committee on Economic, Social and Cultural Rights (CESCR)’s recommendations to abolish the household registration system (2005 & 2014) and to “ensure that all rural-to-urban migrants are able to enjoy work opportunities, as well as social security, housing, health and education benefits enjoyed by those in urban areas” (2014).

China’s recent switch to actively push for the reshaping of the UN human rights system is consistent with its stated foreign policy objective of becoming a “leading global power.”However, to behave in ways worthy of a world leader, the Chinese government must protect human rights at home and abroad, starting by releasing human rights defenders from its jails, abolishing discriminatory laws and practices against socially marginalized population groups, providing fair and equal protections, and allowing an independent judiciary to address grievances.

All UN member states have obligations to protect human rights under the UN Charter and the Universal Declaration of Human Rights. They must defend human rights standards from attempts to undermine them. As China claims to want to make “greater contributions to mankind,” in Xi’s words, UN member states must hold the Chinese government accountable for diminishing or compromising the principles of human rights, for failing to implement the human rights treaties China has ratified, and for pulling back human rights as an equal pillar of the UN as peace and development.