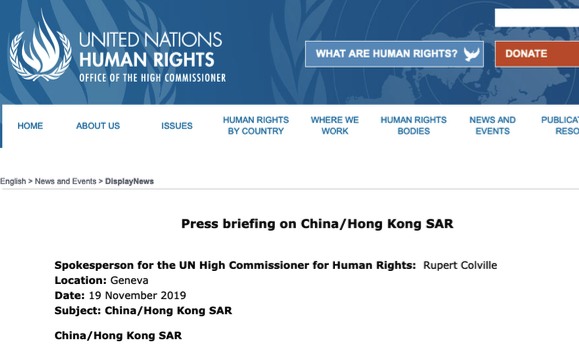 (November 25, 2019) The UN’s highest official principally responsible for human rights, High Commissioner Michelle Bachelet, should publicly denounce the Hong Kong Government for its systematic violations of the rights to freedom of peaceful assembly and freedom of expression, and condemn the unnecessary and disproportionate use of force by police in Hong Kong.

The Hong Kong and Chinese Central governments have allowed police to operate with complete impunity. No police officer has faced legal action over excessive use of force or abuse of power in connection to the violent suppression of the protests since the demonstrations broke out. In contrast, police have arrested almost 4,500 individuals in connection to the protests since June 9. There has been credible evidence of torture and ill-treatment of protestors by police in detention.

On November 19, the Office of the High Commissioner released a press briefing which stated incorrectly that the Hong Kong “authorities have by and large respected the exercise of [the] right [to peaceful assembly].” The Office of the High Commissioner failed to condemn police violence. This amounts to a denial of the extensive documentation from credible sources of violations of human rights in Hong Kong and ignores concerns raised by other UN independent experts.

According to the mandate determined by the UN General Assembly, the High Commissioner has the responsibility to “promote and protect the effective enjoyment by all of all human rights,” and to “play an active role in removing the current obstacles and in meeting the challenges to the full realization of all human rights and in preventing the continuation of human rights violations throughout the world.”

This mandate asks that the High Commissioner use her position to raise serious concerns about human rights abuses everywhere in the world. By not doing so, the Office has harmed its credibility by ignoring police brutality and the suppression of the Hong Kong people’s largely peaceful exercise of their fundamental freedoms.

China’s Government in Beijing has increasingly signalled that it is ultimately in charge in Hong Kong. On November 16, People’s Liberation Army soldiers cleared up debris and bricks, without being invited by the Hong Kong Government to assist, as required by the Basic Law. On November 18, China’s Ambassador to the United Kingdom Liu Xiaoming said, “We [the Central Government] have enough resolution and power to end the unrest.” Holding the China-controlled Hong Kong Government accountable for its human rights abuses is a key test if the UN can resist interference in the UN human rights system by an increasingly powerful China.

Beginning in June, millions of people in Hong Kong have publicly demonstrated against an extradition bill to Mainland China that would have undermined the separate freedoms that are enshrined in law in Hong Kong. The police have repeatedly responded to these peaceful protests with excessive force, and the protests have since morphed into a movement denouncing police violence and demanding full democratic rights for the people of Hong Kong. Police inaction in the face of attacks on protesters, journalists and bystanders at the Yuen Long MTR Station on July 21 represented a clear failure to protect the rights to life and security of persons. Journalists trying to cover the protests have faced violence, intimidation, and threats from police, including an incident in which police shot an Indonesian journalist in the face with a rubber bullet while she covered the protests, permanently blinding her in one eye. Medics and social workers providing assistance to arrestees and injured individuals have also faced police obstruction.

The political situation in Hong Kong has deteriorated since October. Hong Kong Chief Executive Carrie Lam used colonial-era emergency powers to ban face-masks at assemblies (which was later ruled unconstitutional) and police have used live ammunition to shoot three young protesters. The death of 22-year-old student Chow Tsz-lok (周梓樂) on November 8 after being injured close to a police operation sparked the most recent outbreak of violence; the campuses of Chinese University of Hong Kong (CUHK) and Polytechnic University have been turned into battlefields. While certain protestors have used violence, including petrol bombs, bricks and arrows, the Hong Kong Police Force’s response has been severe and disproportionate. Hong Kong police must distinguish violent elements from peaceful protestors and restrict the use of force to the minimum extent necessary, in accordance with the UN Basic Principles on the Use of Force and Firearms by Law Enforcement Officials.

On June 28, four UN independent human rights experts appointed by the UN Human Rights Council sent a communication to the Chinese Government raising concern over allegations of excessive use of force by Hong Kong police on June 12 against “overwhelmingly peaceful” demonstrators. These same four experts then issued a public statement on September 12 stating, “We are seriously concerned by credible reports of repeated instances where the authorities failed to ensure a safe environment for individuals to engage in public protest free from violence or interference.” We are disappointed that this language does not appear in the Office of the High Commissioner’s November 19 press statement.

On August 13, the High Commissioner’s spokesperson said the Office has “credible evidence” of law enforcement officials using some anti-riot measures which are “prohibited by international norms and standards” and urged the Hong Kong authorities to “act with restraint.” The failure of Hong Kong authorities to heed this call from the High Commissioner’s office should have been raised in the latest press statement. Instead, the statement lacks a sense of proportion between the violent actions of small groups of protesters and the systematic use of unnecessary and disproportionate force by police against unarmed protesters.

The High Commissioner herself called on the Hong Kong Government to immediately carry out an “effective, prompt, independent and impartial investigation” into violence during a press conference on October 5. Hong Kong has no independent mechanism to investigate excessive use of force by authorities, as the Independent Police Complaints Council (IPCC)’s expert advisers themselves re-confirmed recently. The IPCC does not have investigatory powers such as subpoenaing documents and summoning witnesses. The Human Rights Committee, which monitors the implementation of the International Covenant on Civil and Political Rights, raised concern over the lack of independence of the IPCC to the Hong Kong Government in 2013.

The High Commissioner for Human Rights must call on Hong Kong authorities to take concrete steps to de-escalate tensions and reduce violence on both sides – police and protesters. As a minimum first step, Hong Kong authorities must establish an independent commission of inquiry into excessive use of police force, bringing to justice any law enforcement official responsible for unlawful use of force, as well as their superior officers. Any response to allegations of violent attacks on police must be handled through a fair judicial process. Those detained solely for exercising their rights to peaceful assembly and free expression should be unconditionally released and charges against them should be immediately dropped.

This statement is endorsed by:

International Movement Against All Forms of Discrimination and Racism (IMADR)

Students for a Free Tibet