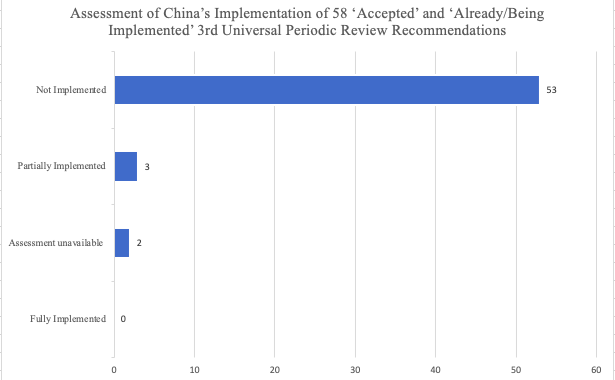 (Chinese Human Rights Defenders—October 8, 2020) The Chinese government has failed to protect and promote human rights in any meaningful way and has exploited the United Nations Universal Periodic Review process. Two years after its 3rd Universal Periodic Review (UPR) in November 2018, China has not fully implemented any of the 58 recommendations that it claimed to have “accepted” and had “already implemented” or  were “being implemented,” according to an assessment by CHRD released today.

The findings come as no surprise. Since the 2018 UPR, under the increasingly draconian rule of Xi Jinping, the Chinese government has escalated human rights repression, in particular, in its crackdown on critics of the government’s handling of COVID-19 pandemic, persecution of ethnic religious minorities in Xinjiang and Tibet, and curtailment of civil and political liberties in Hong Kong.

Our UPR mid-term assessment supports the calls from international NGOs and independent UN experts for UN member states to establish an independent international mechanism, such as such a UN Special Rapporteur, a Panel of Experts appointed by the Human Rights Council (HRC), or a Secretary General Special Envoy, to address the Chinese government’s human rights violations. UN member states should also heed the UN experts’ call and urge the HRC to hold a special session on China. The October 6 statement at the UN Third Committee in New York by 39 states is an important step, but governments should go further and support global civil society and UN experts’ recommendations.

On October 13, the UN General Assembly is electing news members for the Human Rights Council’s 2021-2023 term and China is running for the fifth time. We urge UN member states to seriously consider the Chinese government’s human rights abuses and failure to fully implement the recommendations made during China’s 3rd UPR in 2018. China’s persistent failure to cooperate with the UN human rights system and blatant disregard for human rights clearly disqualifies the country for a seat on the HRC. China has demonstrably violated the Council’s founding principles and does not measure up to its membership criteria. In its voluntary pledge for its current bid for HRC membership, China claimed that it would “implement the commitments made during the third universal periodic review” and protect human rights—but our UPR mid-term assessment illustrates this is not the case.

Awarding China a fifth term on the HRC sends a devastating message to persecuted human rights defenders, suppressed ethnic religious minorities in Tibet and Xinjiang, and besieged protesters defending democracy in Hong Kong. In China’s “voluntary pledge,” the government again openly declared its hostility and opposition to the universality of human rights: “There is no universally applicable model, and human rights can advance only in the context of national conditions and people’s needs.” Another term on the Council would further enable the Chinese state to continue its aggressive campaigns to dismantle the international human rights system built upon the principles of universality and interdependence of human rights. China would be further emboldened in obstructing the Council-appointed independent experts from effectively carrying out their mandates and drain the meaningfulness from the UPR process.

Voting for China to sit on the Human Rights Council would squander an opportunity to hold the Chinese government accountable for its human rights abuses and further damage the credibility of the world’s leading multilateral political body addressing human rights issues globally.

Another eight recommendations that China claimed in 2018 to have “already” implemented related to freedom of religion. All eight of these recommendations had not been implemented by 2018 nor have they been implemented since then. Freedom of religion has continued to suffer from government suppression since before the 2018 UPR. China has intensified its policy to “Sinicize” religion (a policy of cultural and religious assimilation) and new administrative measures require that “religious organizations must support the leadership of the Communist Party of China.” China has continued to maintain internment camps for Uyghurs and other Turkic Muslims in Xinjiang, where individuals have been arbitrarily detained for exercising their right to religious freedom. Muslims including Uyghurs, Hui, and other Turkic groups, Tibetans, Christian house churches and Falun Gong continue to face brutal persecution.

UN member states made seven recommendations concerning the situation of human rights defenders (HRDs), which China claimed to have “already” implemented. None of these recommendations have been implemented before or since 2018. HRDs including journalists and lawyers continue to face arbitrary detention, enforced disappearance, torture, administrative penalties, collective punishment against their families, and targeted surveillance in response to their work to promote and protect human rights. China often prosecutes HRDs for crimes of “endangering national security,” in violation of international standards. As of October 4, 2020, we have documented 991 cases involving HRDs currently in detention or prison.

The Chinese government continues to engage in reprisals against members of civil society trying to engage with the UN human rights mechanisms, including the HRC, the UPR, Treaty Bodies and the Special Procedures. China has been cited for engaging in reprisals in the UN secretary-general’s reprisals report every year since 2014. In September 2020, the latest UN reprisals report cited “new incidents involving 15 individuals” that “were reported to OHCHR from June 2019 to April 2020.”

China also “accepted” five recommendations related to Hong Kong and one recommendation related to national security legislation, claiming that they had “already” been or were “being” implemented. Since 2018, however, China imposed a National Security Law on Hong Kong in June 2020 that does not conform with international human rights laws and standards. The Law violates the “One Country, Two Systems” principle, and infringes upon the rights to freedom of expression, peaceful assembly, and association, and it is severely undermining the city’s judicial independence.

According to our assessment, China has partially implemented only three recommendations. These include one recommendation on narrowing the income gap between rural and urban areas especially ethnic minority areas; one on reducing air pollution; and one on human trafficking. While we acknowledge some improvements in these areas, the three recommendations are still far from being fully implemented. The rural-urban income gap remains very wide and ethnic minorities are particularly disadvantaged. While air pollution levels in China have dropped in some cities, they remain above World Health Organization recommendations and have risen in smaller cities and rural areas. Human trafficking laws are still poorly implemented and the laws still equate trafficking with prostitution, giving a green light to human trafficking in the form of forced labor and forced marriages.

Several countries made recommendations that we marked as “not SMART”—not specific, measurable, attainable, realistic, or timely. In particular, these concerned China’s ratification of the International Covenant on Civil and Political Rights (ICCPR). China signed the ICCPR in 1998. For more than two decades now, China has made no meaningful effort to work toward ratification. Instead, China has, in law and practice, seriously violated the rights stipulated in the ICCPR. Thus, recommending China to “continue” or “further advance” efforts presuppose erroneously that China had been working toward ratifying ICCPR prior to 2018. Some of these recommendations also did not demand a specific timetable for a timely ratification of ICCPR by China.

Our assessment of China’s human rights record through the lens of the UN Universal Periodic Review process confirms the grim reality that human rights in China are not improving and are not being protected. UN member states must respond. They must take strong action to address the dire human rights conditions in China. The October 13 election for HRC membership is a crucial test of UN member states commitment to human rights and a critical opportunity to support the Human Rights Council’s mandate. China previously sat on the Council for four terms (2007-2009; 2010-2012; 2014-2016; 2017-2019), when it exploited every opportunity to defend human rights abusers and shield itself from scrutiny. There are five countries running for the four seats open in the Asia-Pacific block.

The Chinese government cannot be trusted with decision power as a member of the world’s highest political body to “uphold the highest standard of universal human rights,” as our assessment clearly shows. The Chinese government has carried out cultural genocide towards ethnic Uyghurs and Tibetans, trampled on the rights and freedoms enjoyed by Hong Kongers, and dramatically reduced the space for independent civil society to act in the mainland, and systematically suppressed human rights. Voting for the Chinese government to have a seat on the HRC would harm the protection of human rights not just in China but also on a global scale.

We urge UN member states to take this opportunity to hold the Chinese government accountable for its blatant disregard for human rights abuses, including suppressing critical early COVID-19 outbreak information, censoring the media, punishing whistleblowing doctors, persecuting independent journalists and critics, and kicking out foreign reporters. The Chinese government must not be awarded and encouraged for obstructing any meaningful investigation of its role in the spread of this deadly virus at a time when the COVID-19 pandemic has claimed more than one million lives worldwide and many countries are desperately struggling to control the human toll and economic impacts of the virus.

We urge UN member states to take strong and effective action in response to increasing human rights violations in China and the government’s failure to fully implement UPR recommendations. Voting “no” to China’s bid for HRC membership would send an encouraging message to human rights defenders under assault in China and around the world. A “no” vote is the only principled and responsible vote to remain steadfast to commitments to protect universal human rights.