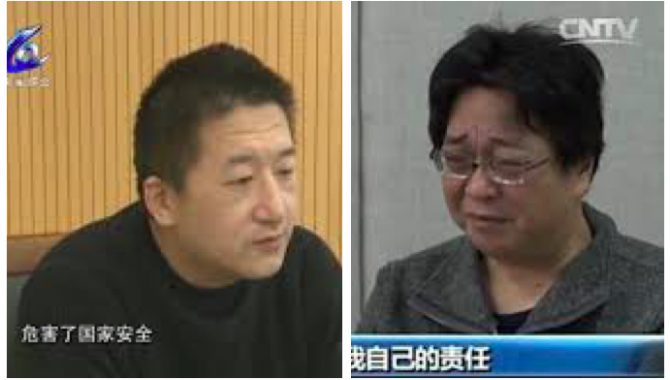 (Chinese Human Rights Defenders – March 11, 2016) – CHRD calls on Chinese authorities to stop “putting on trial” criminal suspects in the “court of public opinion” by broadcasting their “confessions” on state television. Televised confessions, which Chinese authorities may find politically expedient because they vilify detained lawyers and activists, violate both Chinese law and international human rights norms. The “confessors” have not been granted their due process rights; they are essentially pronounced “guilty” in the eyes of the public without a trial and without having met with their lawyers, circumstances that strongly suggest the “confessions” involve coercion, including via psychological pressure, or torture.

These “confessions” on state TV communicate to the public that a suspect is guilty before they have been brought in front of a court or even formally arrested or indicted. Televised “confessions” also violate China’s Criminal Procedure Law, which stipulates that suspects cannot be pronounced guilty without having been judged as such by a court (CPL, Article 12). They taint investigations and interfere with judicial procedure, virtually assuring that prosecutions will not be conducted fairly or legally. They are reminiscent of self-criticisms from the Maoist era, which were used as a tool of widespread political persecution.

Chinese authorities should be held accountable for violating the rights of individuals whose “confessions” have been aired, and should unconditionally release those who remain in custody. If authorities put an end to the practice of televised “confessions,” it would help to provide a basic protection for the legal rights of detainees and be a positive step towards safeguarding justice, as coerced confessions of any type and trials in the “court of public opinion” undermine Chinese authorities’ claims that China is a “rule of law” society. 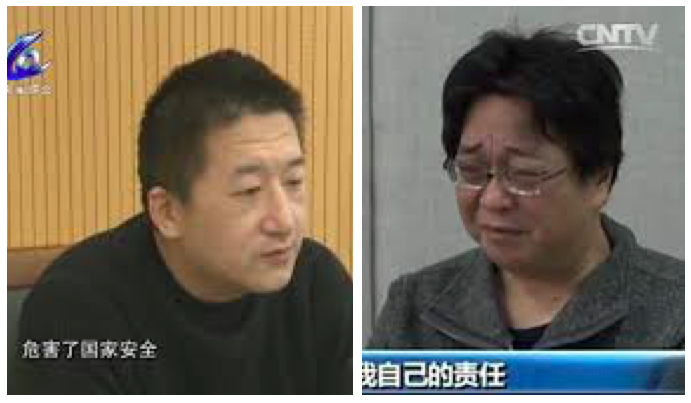 CHRD is calling for an end to state-televised “confessions” in China, such as ones aired this year of rights lawyer Zhang Kai (张凯) and bookseller Gui Minhai (桂敏海), a Swedish citizen.

Televising “confessions” is just one way that authorities have used the media to denounce individuals or groups and control public narratives about government-perceived “political threats.” Following the July 2015 crackdown on human rights lawyers, press reports published by the state news agency Xinhua claimed that police had “broken up a criminal gang” and that those detained were “implicated in serious crimes,” thereby “guiding” public opinion of—and vilifying—human rights lawyers. Authorities have continued to deprive the rights of those still detained from the July 2015 crackdown. Nineteen human rights lawyers and human rights defenders have been arrested without having had access to the lawyers of their or their family’s choice; 16 of them have been charged with serious political crimes, including “inciting subversion of state power” and “subversion of state power.” Police have informed some families that the detainees fired the lawyers that the families hired for them and that the detainees have engaged new lawyers, while police have denied family and lawyer visits that could conceivably help confirm such “decisions.”

Broadcasted confessions, particularly as detainees’ access to lawyers and families has been systematically obstructed, raise strong suspicions that officials have tortured detainees into “confessing.” Chinese authorities themselves recognize that access to a lawyer helps to prevent torture, yet they have deprived human rights lawyers and many others access to their lawyers. When suspects are held incommunicado, without access to lawyers, and “confess” on TV—a cruel and degrading humiliation in itself—it is impossible to verify if they have confessed willingly or have been tortured, threatened, or intimidated.

Forced confessions extracted through mistreatment of criminal suspects remain rampant in China, and are of great concern to the international community. In its Concluding Observations for the 2015 review of China’s implementation of its commitments related to the Convention against Torture, the UN Committee Against Torture (CAT) expressed concern over reports “indicating that the practice of torture and ill-treatment is still deeply entrenched in the criminal justice system, which overly relies on confessions as the basis for convictions.” Indeed, statements in China’s state press and by high-ranking government officials indicate that criminal suspects’ self-incrimination, or at least admitting wrongdoing during “confessions,” continues to be a standard practice. For example, a 2014 state media commentary acknowledged that forcing confessions through torture “has not been rare” in China. In January 2015, a Caijing report noted that Su Zelin, China’s deputy director with the Commission for Legislative Affairs of the National People’s Congress Standing Committee, said 90 percent of cases of “miscarriages of justice” that result in long prison sentences or executions are due to extracting evidence via torture. Yet, in information provided to CAT, the Chinese government cited a law that stipulates evidence gathered by the use of torture to extract confessions shall be excluded, and even if the same evidence is discovered during the legal process, “it shall be excluded in accordance with law, and must not be used as the bases of an indictment opinion, a decision to indict, or a verdict” (Criminal Procedure Law, Article 54).

Even inside China, televised confessions are controversial and criticism against them is increasing, and they likely reduce public trust in the government and the judicial system. In recently published remarks, Zhu Zhengfu, the deputy chairman of the All-China Lawyers Association (ACLA) and delegate to the Chinese People’s Political Consultative Conference (CPPCC), criticized televised confessions, arguing that they do not establish actual guilt and that they violate suspects’ rights. According to the state press account, Zhu also said that suspects should “enjoy the right to dignity,” and that televising confessions gives the impression that a suspect is guilty before any trial proceedings are held. The timing of the publication of Zhu’s criticisms may be significant. They appeared in state media just days before the opening of the CPPCC, which, along with the National People’s Congress, convenes every March in Beijing. Zhu has not been the only domestic voice urging caution about these “confessions.” A Global Times editorial noted that they were “controversial” and that criticism of them was increasing.

Airing “confessions” on state television has become a common occurrence since President Xi Jinping came to power in March 2013. During Xi’s reign, a growing number of both Chinese citizens and foreign nationals have had their taped “confessions” appear on television in seeming acts of government retaliation. Many who have been shown “confessing” are human rights defenders or other civil society figures, including journalists (see a list of cases below). Just as in the Maoist era self-criticism sessions and the parading in the streets of bourgeoisie, televised “confessions” are meant to publicly humiliate and vilify individuals who the Chinese Communist Party regards as “enemies,” and to create an atmosphere of fear by “teaching” others a “lesson.” In many cases, individuals have “admitted” their actions have “endangered national security,” indicating the government’s use of the tactic to legitimize its striking down on dissent and activism.

The most recent televised “confession” was that of Zhang Kai (张凯), a Beijing lawyer who has defended Christian congregations against cross removal and church demolition. On February 25, a “confession” by Zhang, who was criminally detained the day after he finished serving six months of “residential surveillance,” showed him “admitting” to having damaged “national security” through his actions, and urging Chinese lawyers not to accept financial support from abroad. Police first took Zhang into custody in August 2015 in Wenzhou, the city in Zhejiang among the hardest hit by policies affecting churches, and just before he was set to meet with a US official to discuss religious freedom in China. Zhang reportedly faces charges of “gathering a crowd to disrupt social order” and “stealing, buying, and providing state secrets and intelligence” for overseas entities.

In addition to Zhang Kai, below are others involved in “politically sensitive” cases who have had their “confessions” broadcasted on Chinese state television:

On January 17, 2016, bookseller Gui Minhai (桂敏海), a Chinese-born citizen of Sweden, “confessed” to causing the manslaughter death of a 20-year-old student in Zhejiang Province in 2003. As part of his “confession,” he said he willingly surrendered to mainland authorities in October 2015, when it was widely believed he was disappeared by Chinese police. Gui’s detention may be linked to his role in publishing and selling books banned in the mainland that focus on the personal lives of high-ranking Chinese leaders.

On August 31, 2015, Wang Xiaolu (王晓璐), a financial journalist with the state publication Caijing, “admitted” to “colluding with others” and “spreading false information” in a story that he had written in July of that year about China’s stock market. Authorities accused him of “destabilizing” the market during a “sensitive” time of economic uncertainty. Wang had been detained on August 25 and placed under “criminal compulsory measures” five days later, one day before his “confession” was aired.

On July 12, 2015, Huang Liqun (黄力群), a lawyer with Beijing Fengrui Law Firm, “admitted” that Zhou Shifeng (周世锋), head of the firm, had taken on “sensitive cases” in order to gain fame and wealth, had organized protests outside courthouses, and was “very lecherous.” Huang had been criminally detained in the July 2015 crackdown, and was held incommunicado in an unknown location before he was released on January 7, 2016.

On May 8, 2014, veteran dissident journalist Gao Yu (高瑜) “confessed” that she had “harmed the interests of the country,” apparently referring to her sharing with an overseas website a CCP document (known as Document No. 9), which had already been made public. Gao was given a seven-year prison sentence in April 2015 after being convicted of “illegally disseminating state secrets overseas.” She is currently serving the punishment outside of prison due to her poor health.

On October 25, 2013, Chen Yongzhou (陈永洲), a former reporter with the Guangzhou-based newspaper New Express, “confessed” to taking bribes to fabricate stories about fraudulent financial practices at a state-own construction firm in Hunan Province. Chen was sentenced to 22 months in prison in October 2014, after being convicted of “fabricating and spreading falsehoods to damage the business reputation of others.” His case has been regarded as retaliation against Chinese journalists who have investigated corruption at state-run companies and challenged government policies.

On September 26, 2013, three detained students of the ethnic Uyghur economist Ilham Tohti (伊力哈木·土赫提)—Luo Yuwei (罗玉伟), Perhat Halmurat (帕哈提·哈力木拉提), and Shohret Nijat (肖克来提·尼加提)—had their “confessions” broadcast on state television. They described how Ilham Tohti, who had been sentenced to life imprisonment only two days before the “confessions” aired, had “threatened and coerced” them into working for Uyghur Online, the now-banned website he founded that focused on issues affecting the Uyghur population in China. Along with four other students, the “confessors” were initially detained in January 2014, tried in closed proceedings that November, and sentenced to prison for “separatism” on December 8, 2014. Each is serving a sentence of at least three years, based on available information on the cases.

On January 19, 2016, Swedish national Peter Dahlin “admitted” that he had “caused harm to the Chinese government” by participating in activities with Chinese lawyers and activists. A founder of an NGO set up in China to aid rights lawyers, Dahlin had ties to arrested lawyer Wang Quanzhang (王全璋). Chinese authorities also accused Dahlin of helping activist Xing Qingxian (幸清贤), who has been held incommunicado in China since last October, to assist the 16-year-old son of another arrested rights lawyer, Wang Yu (王宇), to get out of China. Dahlin had been placed under “criminal compulsory measures” earlier in January on suspicion of an “endangering state security” offense, and he was deported on January 25.

On September 15, 2013, Xue Biqun (薛必群, aka Charles Xue), a venture capitalist and blogger who had over 12 million followers on his weibo account, “confessed” to “rumor-mongering” for posting and commenting online about issues of social injustice in China, including child trafficking and problems faced by underprivileged groups. Many believe that the Chinese-born Xue, a naturalized US citizen, had been detained (for allegedly “soliciting prostitutes,” on August 23, 2013) as part of a strident government crackdown on online expression and cyber-activism. Xue was eventually released on bail in April 2014, reportedly on health grounds, but only after CCTV broadcasted another taped “confession” by him.