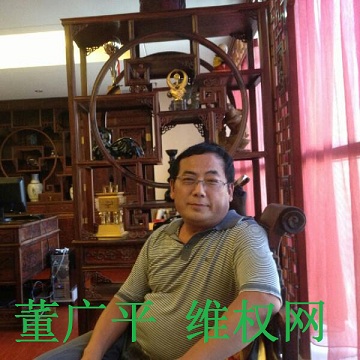 Length of Punishment: 3.5 years, one year deprivation of political rights

Henan activist Dong Guangping received a 3.5-year prison sentence in July 2018 in retaliation for advocating for justice for the victims of the 1989 Tiananmen Massacre and for escaping persecution by fleeing to Thailand. Dong had fled to Thailand in September 2015 to escape police harassment. Authorities held Dong for over 30 months before putting him on trial and have held him incommunicado for the entirety of his detention.

Dong fled China due to criminal prosecution stemming from the exercise of his rights to freedom of expression and assembly around the 25th anniversary of the Tiananmen Massacre in 2014. Police detained Dong in Luoyang City in May 2014, along with other Henan activists, after they held a memorial in February commemorating the anniversary of June Fourth. The memorial included a tribute to the victims and paying respects to Zhao Ziyang, the Communist Party’s general secretary at the time of the 1989 demonstrations who sympathized with the protesters. Dong, initially charged with “gathering a crowd to disrupt order of a public place,” was formally arrested on July 2, 2014, but on suspicion of “picking quarrels and provoking trouble.” Dong was held at Zhengzhou No. 3 Detention Center until his release on “bail pending further investigation” on February 11, 2015. Faced with ongoing pressure from authorities, Dong fled to Thailand eight months later, and his wife and daughter joined him weeks later.

The U.N. High Commissioner for Refugees granted Dong and his family refugee status in April 2015. However, Thai authorities, acting under pressure from the Chinese government, seized both Dong and fellow activist Jiang Yefei (姜野飞), ostensibly due to visa violations, on October 28, 2015, a decision condemned internationally. Jiang, an activist and political cartoonist, was accused of helping Dong and his family escape to Thailand. Both men were handed over to Chinese police on November 13, 2015, and sent back to China. They were forcibly repatriated only days ahead of their planned resettlement as refugees in Canada, and after talks between the Thai and Canadian governments broke down. Soon after Dong and Jiang were taken back, their family members left Thailand to resettle in Canada.

Dong Guangping’s legal rights have been routinely violated throughout his detention. His family reportedly hired several defense lawyers, including Chang Boyang (常伯阳), but authorities blocked them from meeting Dong. In preventing the lawyer visits, Chongqing authorities claimed that Dong had “fired” his defense attorneys and eventually assigned a lawyer to his case. Dong’s family had not received any formal notification of his detention, arrest, or indictment. On November 26, 2015, Chinese state television aired a video of Dong “confessing” to having crossed into Thailand illegally, likely a staged act that was executed under coercion. Authorities tried Dong and Jiang Yefei in the same case, with Jiang, convicted of “organizing others to illegally cross a national border” and “subversion of state power,” receiving a 6.5-year sentence.

The forced repatriations of Dong and Jiang were among several such cases in late 2015, as the Chinese government wielded regional influence to forcibly bring human rights defenders to China in order to mete out state punishment. Book publisher Gui Minhai (桂敏海), a naturalized Swedish citizen born in China, was kidnapped in Thailand on October 17, 2015 and forcibly taken to China. According to Reporters Without Borders, he was sent back to China on the same chartered flight as Jiang and Dong. In early October 2015, activists Xing Qingxian (幸清贤) and Tang Zhishun (唐志顺) were repatriated from Myanmar, apparently after trying to help Bao Zhuoxuan (包卓轩), the son of then-detained lawyers Wang Yu (王宇) and Bao Longjun (包龙军), make his way to the United States to seek political asylum.

Born on April 13, 1958, in Zhengzhou, Dong Guangping worked as a police officer before turning to human rights activism. He lost his job as a policeman in 1999, apparently in reprisal for co-signing a public letter commemorating the 10th anniversary of June Fourth. He served a 3-year prison sentence from 2001, convicted of “inciting subversion of state power” for his pro-democracy activities, but immediately resumed his activism once released from prison in 2004.