Suppression Ahead of 30th Anniversary of Tiananmen Massacre

May 30, 2019       Comments Off on Suppression Ahead of 30th Anniversary of Tiananmen Massacre 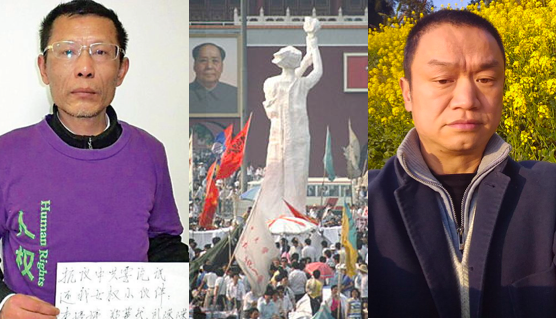 Updated July 9, 2019 (we will update this list as we confirm cases & case details)

(Chinese Human Rights Defenders—May 30, 2019) On the eve of the 30th anniversary of the Tiananmen Massacre, Chinese authorities took into custody a number of activists and netizens in an apparent attempt to silence any expression or thwart any action aimed at commemorating the victims and mark the anniversary. Several artists on a “national conscience exhibit tour” have gone missing, feared to have been detained. Authorities stepped up online policing and summoned users for questioning on their comments about politically “sensitive” topics, like activist Zhou Weilin (周维林), who though released has had his phone and computer confiscated. Activist and former participant in the 1989 protests, Wang Debang (王德邦), was also summoned for questioning and interrogated about his plans for the anniversary.

The government’s pre-emptive strikes against anyone trying to mark the 30thAnniversary had started in early May. So far, we have documented a number of cases involving individuals either detained or forced into disappearance, including forced travel, in connection to the anniversary. CHRD urges the Chinese government to immediately and unconditionally release them.

This year’s pre-June 4thcrackdown continues a 30-year long campaign by the Chinese government to try to erase the memory and rewrite the history of the bloody military suppression of peaceful unarmed protesters and residents of Beijing and other cities on June 3-4, 1989.  The Chinese government has systematically curtailed citizens’ exercise of their rights to freedom of expression, information, press, peaceful assembly, and association in discussing or commemorating or obtaining information about the 1989 movement and Tiananmen Massacre.

Against tremendous pressure and personal risk, many Chinese have spoken up and kept the Tiananmen memories alive. In April, Chengdu authorities convicted four activists of “picking quarrels” after holding them for three-years in pre-trial detention on “endangering state security” charges for their role in producing and sharing photos online of a wine label referring to June 4th 1989 to mark the 27th anniversary in 2016. In November 2018, a Zhuhai court sentenced activist Li Xiaoling (李小玲) to three years in prison, suspended for five years, after she shared a photo of her holding a sign in Tiananmen Square to mark the anniversary in 2017.

Each year, around this time, the government has taken strict measures to silence its critics and prevent any public expression of mourning. These measures include taking activists on “forced travel,” putting them under house arrest, or surveillance, and censoring words on the Internet like “Tiananmen,” “June 4th,” or “massacre.”

The government has also targeted leaders and participants in the 1989 movement and subjected them to harsh persecution. One example is Liu Xiaobo (刘晓波), the 2010 Nobel Peace Prize winner, who died in 2017 in police custody while serving an 11-year sentence. Several are currently incarcerated for their post-1989 advocacy for human rights, rule of law, and democratic reforms. We have documented 19 cases involving 1989 leaders and participants currently in detention or imprisoned in China for their post-Tiananmen activism.

Since early May, authorities have detained, disappeared or forced to travel several Chinese apparently in connection to the approaching 30thanniversary of the Tiananmen Massacre. Additionally, several others have been taken in for questioning or put under de facto illegal house arrest. Below is a list of the cases we have tracked: 25 individuals who have been detained/disappeared/forced to travel; and 12 individuals known to have been questioned or put under house arrest, for a total of 37 individuals known to be affected, though the true number is likely higher.

25 individuals who have been detained/disappeared/forced to travel (in chronological order):

12 individuals put under illegal house arrest or summoned for questioning (in chronological order):