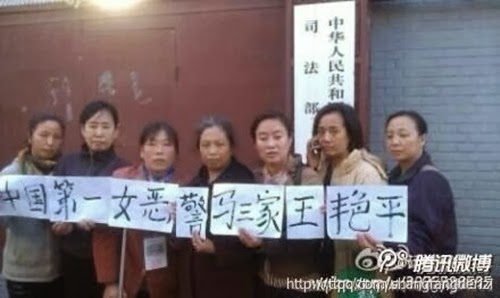 Victims of the Masanjia labor camp in Liaoning Province demanding that an abusive RTL guard be brought to justice. (image: HRCC)

Eight women once held at the notorious Masanjia Women’s Re-education through Labor (RTL) camp in Liaoning Province were sentenced in mid-June to prison terms ranging from one year to 18 months in retaliation for seeking remedies for abuses they suffered, reports Civil Rights and Livelihood Watch (CRLW).[1] The women were formally arrested in April and tried in mid-May by the Haicheng City People’s Court in Liaoning on charges of “creating a disturbance” after demanding government compensation for being detained and mistreated in the camp. The women sentenced are: Li Liyong (李立勇), Shi Junmei (石俊梅), Su Dezhen (苏德珍), Sun Rongyou (孙荣佑), Zhang Hongshu (张洪书), Zhao Lifen (赵丽芬), Zhong Shujuan (仲淑娟), and Zhu Jianyun (朱建云). These women, some in their 70s, were among more than 10 former Masanjia detainees taken into custody in late March—some in Beijing and others in Haicheng. Several others detained in March are awaiting sentencing or have been released on bail pending further investigation of their cases.[2]As the reported prison terms show, RTL victims are highly vulnerable to reprisal if they try to seek justice for abuses they suffered in the extralegal detention system, which was abolished in late 2013.[3]

Shanghai police took into custody a dozen activists for rallying to call on Chinese President Xi Jinping to respect human rights in mid-May, days before a summit of Asian government leaders in the city.  Subsequently, two of them, Zheng Peipei (郑培培) and Yan Lanying (颜兰英), were arrested on a charge of “creating a disturbance” on June 20. Their families received the notice from Shanghai Municipal Public Security Bureau on June 22, according to Rights Defense Network. Zheng is being held at Huangpu District Detention Center and Yan at Xuhui District Detention Center. [4]  The case also involves the criminal detentions of eight others and disappearances of two more.

The dozen individuals had marched in the streets in Shanghai on May 16 near the hotel where the Conference on Interaction and Confidence-Building Measures in Asia was set to open just days later.  The demonstrators carried a banner that disparaged the summit as a “Confidence-Suppressing Mania Meeting,” and that decried suppression of petitioning and information while calling on President Xi, who was to attend the conference, to show more concern about human rights violations in Shanghai.

A victim of forced home demolition, Zheng has faced retaliation for seeking compensation over the loss of her property, including detention in a black jail and beatings. Zheng was among many taken into custody in the spring of 2011, when authorities cracked down on civil society following online calls for “Jasmine rallies” that were inspired by the political upheaval in the Middle East and North Africa. Like many activists in Shanghai and elsewhere in China, the detainees in this case started their human rights activities by seeking remedies for personal grievances, and they have become human rights activists protesting official corruption and violations of civil rights, such as free expression and assembly, after realizing that they cannot find justice without such liberties.

Ten more individuals have been formally arrested in the crackdown tied to the 25th anniversary of the Tiananmen Massacre, as reported by RDN and other sources inside China, bringing to 17 the number of such known arrests. To date, CHRD has confirmed a total of 148 people known to have been affected by suppression around the anniversary, including more than 50 put under criminal detention (see our ongoing updates).

In Zhengzhou, Henan Province, five activists and two lawyers were formally arrested on July 3. All seven individuals were connected to a June Fourth memorial event held in February. Those arrested include the activity organizers, Chen Wei (陈卫) and her husband Yu Shiwen (于世文), and three attendees—Mr. Hou Shuai (侯帅), Mr. Fang Yan (方言，aka Fang Hongwei (方鸿维), and Mr. Dong Guangping (董广平). Two lawyers who represented some of these individuals, Mr. Chang Boyang (常伯阳) and Mr. Ji Laisong (姬来松), were also arrested. All seven are facing a charge of “creating a disturbance” and are being held in Zhengzhou City Public Security Bureau No. 3 Detention Center. Two others who went to the memorial, Mr. Shi Yu (石玉), a journalist, and Mr. Shao Shendong (邵晟东), were released on “bail pending further investigation,” also on July 3.[5]

In Hubei Province, activist-turned-Buddhist-monk Sheng Guan (圣观), whose real name is Xu Zhiqiang (徐志强), and Ms. Huang Jingyi (黄静怡), were arrested on June 17 for “inciting subversion of state power.” Both were seized on May 17 in Wuhan, where Sheng was giving a lecture on Buddhist texts that Huang was attending (see report). Xu and Huang are being held at Jiang’an District Detention Center.

In Beijing, dissident journalist Gao Yu(高瑜) was arrested on a charge of “illegally disseminating state secrets overseas” on May 30, about one month after she first disappeared (see report). On June 27, lawyer Zhang Sizhi (张思之) was finally able to visit the 70-year-old Gao at the Beijing No.1 Detention Center for the first time since she was taken into custody. The charge against Gao reportedly stems from a “top secret document” linked to her that had been posted to an overseas website in August 2013.

Chengdu taxi driver Wen Zhonghua (温中华), who went on trial on June 19, stated in court that police had tortured him last year in order to coerce him into testifying against fellow taxi drivers on fabricated facts, reports RDN. More than 100 taxi drivers drove to Beijing in late March 2013 to petition the central government against what they saw as unfair fees imposed by Chengdu authorities. Wen and two other taxi drivers, Wang Tanggui (王堂贵) and Qing Ping (卿平), were taken away by unidentified men after they arrived in Beijing and forcefully returned to Chengdu; many other drivers were intercepted on their way to the capital. Unidentified men at a Shuangliu County police station cuffed Wen’s hands behind his back and lifted him by the handcuffs, causing Wen immense pain. The men then placed a helmet on Wen’s head and severely beat and kicked him while Wen was cuffed to a bench. On April 1, 2013, the perpetrators told Wen to sign an interrogation report that had been prepared in advance if he did not want to be beaten further. Unable to withstand the physical violence, Wen complied with their request. A subsequent application by the Shuangliu County Detention Center to transfer Wen to the Chengdu City Detention Center was declined when contusions were found on his chest and legs.[6]

Wen is being tried on suspicion of “illegal assembly, procession or demonstration” stemming from the 2013 road trip to Beijing. Besides reports of beatings, many of those petitioning were administratively or criminally detained. Among them, Li Zhangxu (李章旭) was also reportedly beaten during interrogation, causing his eardrum to rupture. A hospital examination confirmed his injuries, but local police denied the beatings.[7]

Chinese authorities are not providing proper medical care to a number of political prisoners and detainees, leading to the worsening of serious illnesses and putting individuals’ lives at risk (see “watch list” launched by CHRD on June 26 to mark the UN International Day of Support of Victims of Torture). In three cases—Chen Xi (陈西),Wang Kouma (王扣玛), and Zhu Yufu (朱虞夫)—family members have expressed fears that the individuals might die in custody if they remain untreated, a concern made all the more real following the death of detained activist Cao Shunli (曹顺利)last March. For Pu Zhiqiang (浦志强), Liu Xia (刘霞), and Lü Jiaping (吕加平), it is believed that their deteriorating health may lead to permanent physical, mental, or sensory disability. Other individuals on the list are experiencing illnesses that would lead to further health complications if they are not able to access appropriate medical care.

Check Out New Profiles of Prisoners of Conscience

Several new profiles of prisoners of conscience are now available on CHRD’s website, including:

Tibetan monk Karma Tsewang (堪布尕玛才旺), seized in December 2013, has been accused of “harboring fugitives” and “leaking state secrets,” and also subjected to mistreatment, including not being given sufficient treatment for various health problems.

Ren Ziyuan (任自元), a former middle school teacher, was sentenced in March 2006 to10 years’ imprisonment for “subversion of state power” for allegedly trying to form a political party. Incarcerated in Shandong Provincial No. 1 Detention Center, he has reportedly been physically tortured, put into extended solitary confinement, and denied proper medical treatment for tuberculosis.

Liu Benqi (刘本琦), an active netizen, was convicted of “spreading rumors or slanders or using other means to incite subverting state power or overthrow the socialist system” and sentenced to three years in prison by the Mongol and Tibetan Autonomous Prefecture People’s Court on January 23, 2014.

Miao Deshun (苗德顺), believed to be the last person still imprisoned for involvement in the 1989 pro-democracy protests, was seized after allegedly throwing a basket on a burning tank. In October 1989, the Beijing Municipality Intermediate People’s Court sentenced him to death on a charge of “arson,” with a two-year reprieve. Held in Yanqing Prison, his sentence was subsequently commuted twice, and he is due to be released in 2018.