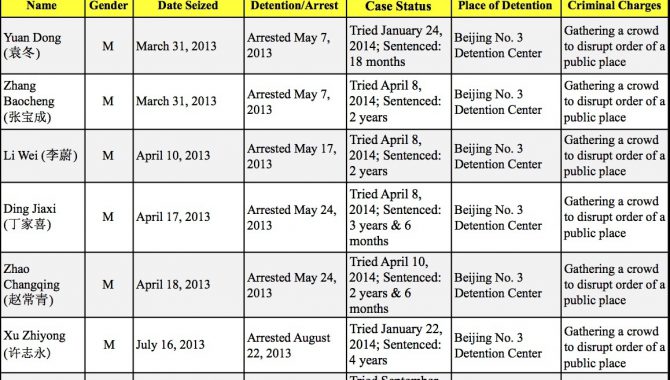 Sentences, Trials, Indictments & Arrests in the Crackdown: A CHRD Guide

What is the current situation of individuals, including participants in the New Citizens’ Movement, who were swept up by Chinese authorities last year in President Xi Jinping’s strident crackdown on civil society? Since March 2013, CHRD has documented the detentions of 70 people—including activists, lawyers, and other citizens—and monitored their situation and changing status. Most recently, on April 18, the Haidian District People’s Court in Beijing announced prison sentences for lawyer Ding Jiaxi (丁家喜) as well as activists Li Wei (李蔚), Zhao Changqing (赵常青), and Zhang Baocheng (张宝成), who were all put on trial earlier in the month (see report). These four have joined three others who CHRD has confirmed to be sentenced for exercising their rights to peaceful assembly, association, and expression (see the table below for confirmed sentences, and view our full list of detentions). 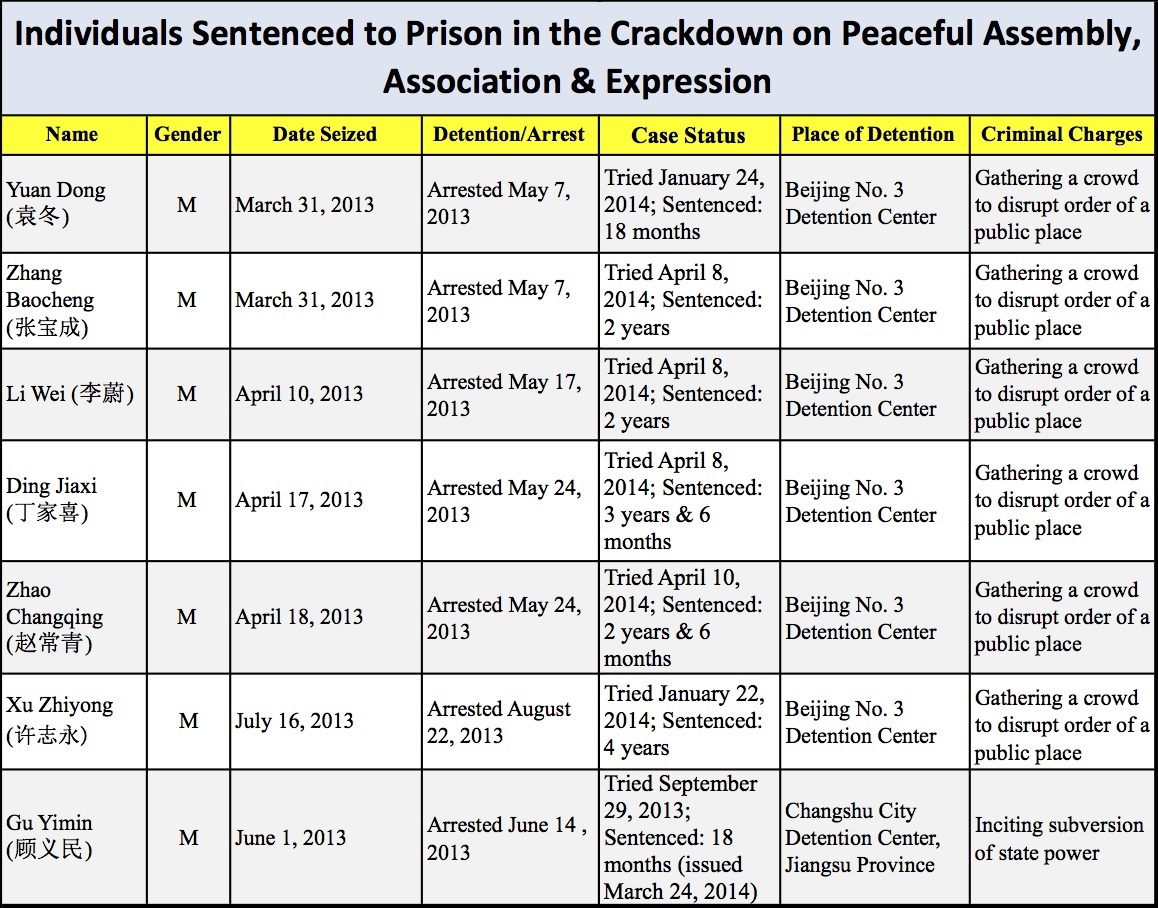 During the crackdown, citizens have been detained in Beijing and the provinces of Anhui, Guangdong, Hubei, Hunan, Jiangsu, Jiangxi, Yunnan, and the Xinjiang Uyghur Autonomous Region. Of individuals whose cases CHRD has documented, 44 have been formally arrested. Besides the seven issued prison sentences, seven other people have been put on trial; Beijing activist Hou Xin (侯欣) was not issued any punishment following her trial in January, and verdicts have not been announced in six more cases. Several others, including Ma Xinli (马新立), Sun Hanhui (孙含会), Wang Yonghong (王永红), Qi Yueying (齐月英), and Song Ze (宋泽), have been “released on bail awaiting trial.” At least seven more individuals believed to be currently detained have been indicted, but their trials have not yet taken place.

Several new profiles of prisoners of conscience are now available on CHRD’s website, all focusing on activists from Beijing and Guangdong Province detained in the crackdown on peaceful assembly, association and expression. In January 2014, Beijing activist Yuan Dong (袁冬) was sentenced to 18 months in prison after calling on top Chinese officials to disclose their personal wealth at a demonstration in March 2013. Yuan took part in the rally with Ma Xinli (马新立), who was released on bail in February. Three more in Beijing—Zhang Baocheng (张宝成), Li Wei (李蔚), Ding Jiaxi (丁家喜), were tried and sentenced in April.

Pre-trial proceedings were held in March in Hubei Province for Guangdong activists Huang Wenxun (黄文勋), Yuan Fengchu (袁奉初, aka Yuan Bing, 袁兵), and Yuan Xiaohua (袁小华). The men were seized in late May of 2013 while on an “advocacy tour” in Chibi City in Hubei that encouraged citizen activism and promoted democracy and rule of law. They are facing charges of “gathering a crowd to disrupt order of a public place.” Also from Guangdong, activist Yang Lin (杨林, aka Yang Mingyu, 杨明玉), whose trial is set to begin in May, was seized in June of 2013 and charged with “inciting subversion of state power.” Held incommunicado for weeks, national security officers reportedly threatened Yang by saying that he could be made to disappear.