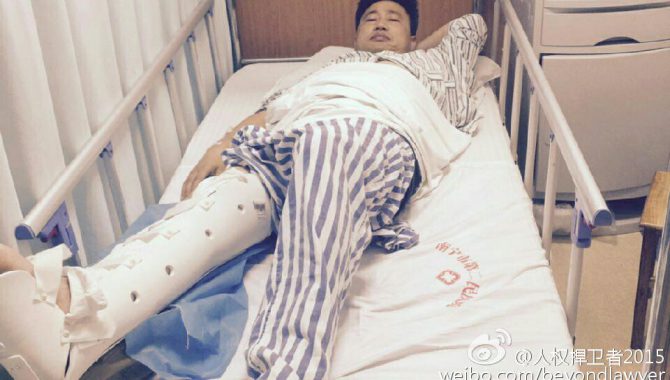 4 Recent Incidents of Violence Against Lawyers

Four separate incidents of physical assaults against lawyers in the past three months demonstrate the increasing risks faced by human rights lawyers in China. These recent acts of violence are part of a pattern that CHRD detailed in its 2014 Annual Report on the Situation of Human Rights Defenders. The lack of independent investigations and accountability for these attacks inflicted by government officials (or with the government’s consent or acquiescence) has allowed the perpetrators to enjoy impunity and the use of violence in reprisals against rights lawyers to continue.

In the latest incident of such violence, lawyer Wang Quanzhang (王全章) was beaten in a Shandong courthouse, and he and two of his colleagues also were briefly detained. On June 18, Wang and lawyers Chen Zhiyong (陈智勇) and Shi Fulong (石伏龙) attended a court hearing for their client at Dongchengfu District People’s Court in Liaocheng City. During the defense statements, Wang was repeatedly interrupted before the presiding judge expelled him from the courtroom. Several bailiffs then dragged Wang to a separate room and assaulted him, hitting him in the face and head and tearing off his clothes. Wang reportedly suffered a slight fracture to his nose. At the same time, other bailiffs barred Chen and Shi from leaving the courtroom and subjected them to full body searches. Lawyer Chen was released from custody around 11 pm. Wang and Shi were taken to Huxi Police Station in Dongchengfu District, where officers questioned them and confiscated their computers and storage devices. Wang and Shi were released around 2 am the next morning.[1]

For three cases that occurred in April and May, CHRD has provided information to independent human rights experts appointed by the United Nations Human Rights Council, and asked them to inquire to Chinese authorities about the incidents: 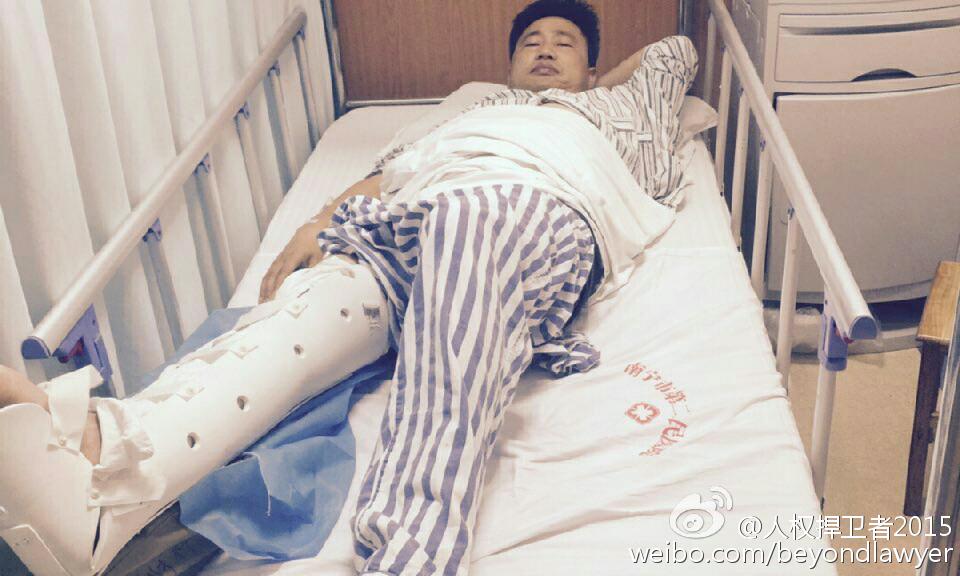 Unidentified men attacked lawyer Xie Yang (谢阳), leaving him with a fractured leg. Police did not respond to emergency calls for help during the assault.

Ding Jiaxi (丁家喜), a Beijing-based human rights lawyer sentenced to three-and-a-half years in prison in April 2014, is being held unlawfully and should be released and given reparations by the Chinese government, the UN Working Group on Arbitrary Detention (WGAD) said in an opinion adopted in April 2015 and made public in May.

The Working Group found that Ding has been “deprived of liberty for having peacefully exercised his right to freedom of expression and freedom of association as guaranteed by articles 19 and 20 of the Universal Declaration of Human Rights (UDHR).” The ruling follows a communiqué on Ding’s case that CHRD submitted to the Working Group shortly after the lawyer was sent to prison.

Ding was initially detained in April 2013 during the first major crackdown under President Xi Jinping, after he was involved in an anti-corruption campaign calling for the disclosure of top Chinese officials’ financial assets. He has been a close associate of the imprisoned professor and legal advocate Xu Zhiyong (许志永) in the “New Citizens’ Movement,” a grouping of activists who have promoted social justice and political and legal reforms.

CHRD has added 18 new “Portraits of Defenders”—imprisoned or detained human rights defenders (HRDs) in China—that provide background information and details of persecution for their activities promoting human rights. Several individuals have been released on bail but are living under strict police surveillance.

The new case profiles include six HRDs who have been issued prison sentences:

Other portraits added include two individuals detained in the crackdown surrounding the 25th anniversary of June Fourth. Yu Shiwen (于世文) is awaiting trial after being indicted in February 2015, and Jia Lingmin (贾灵敏)’s trial resumed in early June after being suspended twice.

In addition, profiles for Li Maizi (李麦子) and Wu Rongrong (武嵘嵘), two of the five feminists detained on the eve of International Women’s Day, have been created. Beijing authorities released the five women on “bail pending further investigation” after condemnation from abroad and by local activists, but they are still considered “criminal suspects” and are under tight police surveillance.