(Network of Chinese Human Rights Defenders—July 7, 2016) – One year after Chinese authorities launched an unprecedented crackdown on human rights lawyers, CHRD urges the government to release the remaining 19 lawyers and activists who are detained incommunicado. The majority of them have been arrested for offenses tied to national security, and 10 face the possibility of life imprisonment if convicted. In what has come to be known as the “709 Crackdown,” the Chinese government under President Xi Jinping has waged war against the legal advocates for rule of law and human rights defenders in China.

The crackdown involved the initial rounding up and questioning of over 300 human rights lawyers, their associates, and activists in July 2015. Of the 19 individuals still in detention, all have been formally arrested, including 15 on suspicion of “subversion” (105(1) Criminal Law) or “inciting subversion” (105(2)), both criminal offenses in the category of “endangering national security.” Fourteen others, who authorities released on “bail pending further investigation” after lengthy detentions, are living under restrictive conditions and police surveillance. (See CHRD’s website for more details on individuals harassed and persecuted in the crackdown; case details for those currently detained are listed in this chart.)

The Chinese government must immediately and unconditionally release all individuals detained in the crackdown, end political interference in the independence of lawyers, and protect fundamental rights as guaranteed by the Universal Declaration on Human Rights.

The primary targets of the crackdown have been lawyers and law firms that have tackled some of the most controversial human rights cases. Many had engaged in advocacy campaigns around “sensitive incidents,” during which lawyers and civil society actors jointly spoke out about rights abuses or publicly pushed for legal reforms. In the days after the crackdown began, state-run media denounced many of the detained lawyers for “masterminding” these incidents, and singled out Beijing Fengrui Law Firm as having acted as a “criminal syndicate.” The firm has been particularly affected; five of its staff are currently under arrest, including its director, and four have been released on bail after at least six months detention. According to CHRD sources, the firm has effectively been shut down, putting in limbo the professional livelihoods of 55 lawyers.

Chinese authorities have extensively employed legal provisions related to “national security” to target the legitimate human rights activities by the detainees. While not entirely new, this tactic has been used more extensively since President Xi Jinping took power in March 2013 and become a hallmark of widespread suppression against civil society. The 709 Crackdown began just days after China enacted its widely criticized National Security Law, which is vaguely worded and expanded the definition of “national security.” That law and other regulations provide legal cover for police and courts to label criticism of the Chinese Communist Party (CCP) or sharing information about rights abuses in China as national security “threats.”

The detentions may also be a warning to other human rights lawyers and advocates to not exercise their right to free association. Authorities apparently blame some of the lawyers and firms for the activities of the self-organized “China Human Rights Lawyers Group” (中国人权律师团), who released joint open letters and statements concerning rights violations. Authorities are also criminalizing lawyers’ suspected ties to international human rights groups. For instance, authorities publicly accused one detained lawyer on state TV of having an affiliation with an international NGO. The director of that group, a Swedish national, was detained in January 2016 on suspicion of “funding activities that endanger national security” before being deported. Two other detainees in the crackdown reportedly cooperated with the international NGO The Rights Practice.

Since the outset of the crackdown, police have ignored or perverted Chinese laws and the country’s constitution, and are suspected of gross abuse of power. For months, the families received no notification of their loved ones’ whereabouts or status, as authorities made extensive use of a provision in the Criminal Procedure Law to put detainees under “residential surveillance in a designated location.” A de facto form of incommunicado detention, the UN called on the Chinese government to repeal this provision “as a matter of urgency” in December 2015.

The vast majority of those still in detention, themselves mainly lawyers, have been entirely denied access to a lawyer or one of their choosing. Police initially used national security legislation to deny lawyers’ visits with their clients before claiming that 11 individuals had “fired” their family-appointed lawyers in early 2016, and instead engaged government-approved lawyers. These abuses have raised strong concerns that the individuals may have been subjected to torture or other inhumane and degrading treatment. Authorities undermined the presumption of innocence by airing “confessions” of some of the detainees and smeared the names of others in state media prior to the detainee’s formal arrest or any upcoming trial. By using the CCP’s propaganda apparatus to conduct “trials by state media,” authorities have attempted to discredit some of the detainees, further isolate them from the outside world, and make it impossible for them to defend themselves.

Such actions also run counter to China’s legal commitment to international human rights, as spelled out in the seven human rights-related treaties that China has signed or ratified. The government is also bound by the Universal Declaration on Human Rights, which demands that states respect basic rights, including freedom of expression, assembly, and association, and the rights to just conditions of work, freedom from arbitrary detention, a fair trial, and an absolute prohibition of torture. Chinese authorities have violated or are suspected of violating all of these rights in their conduct during the 709 Crackdown.

The Chinese government can only stop discrediting itself and dishonoring its pledge to “rule the country with law” by releasing lawyers and activists who have been arbitrarily detained in retaliation for exercising and defending human rights.

Those countries and the European Union that have bilateral relationships with China must make clear in all high-level meetings and official dialogues that respect for the rule of law and international human rights norms are imperative, and that the Chinese government should release all 19 individuals still being held in this crackdown to demonstrate respect for this principle.

The UN Human Rights Council must investigate accusations that China has “systematically and grossly” breached its membership obligation to “promote and protect human rights” in light of the crackdown and other developments in China. UN Member States should put human rights ahead of business interests, raise concerns during Council sessions over deteriorating human rights conditions in China, and support resolutions providing better protection for human rights.

For more information on the “709 Crackdown” on rights lawyers, see 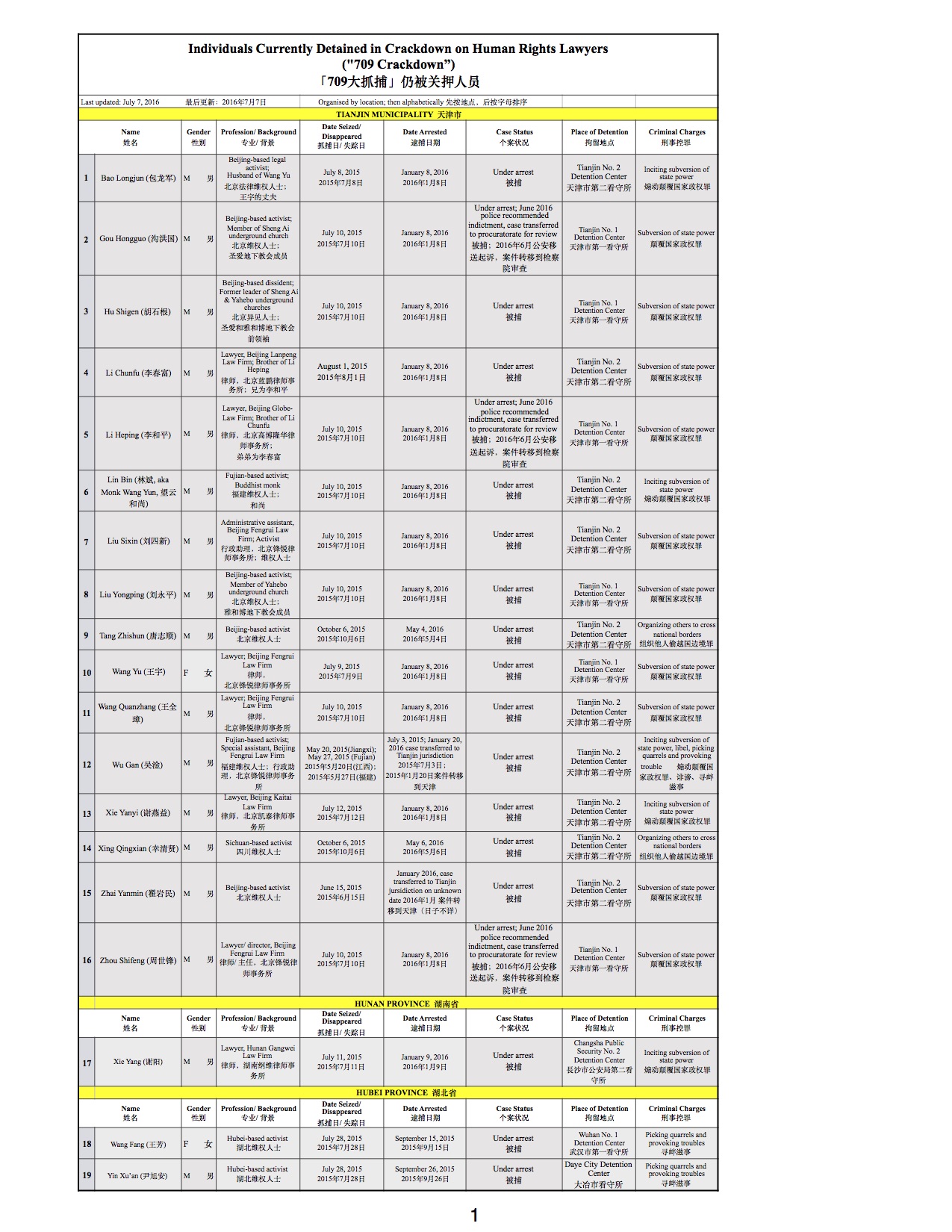