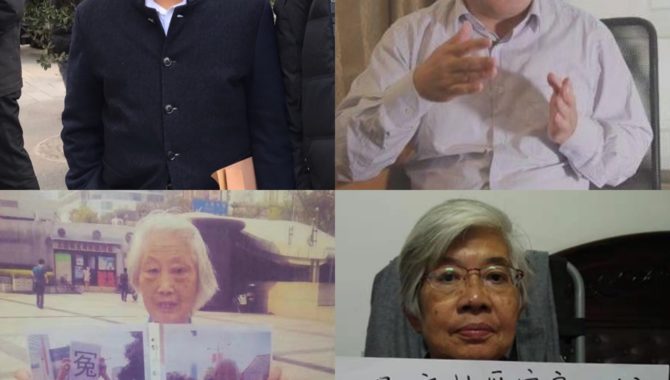 As the World Health Organization experts touched down in China to investigate the origins of COVID-19, two women who spoke out about vaccine safety are nowhere to be found. Hua Xiuzhen was last seen on January 13th, in Shanghai, escorted away by Yangpu District Neighborhood Committee officials. Her disappearance came three months after another woman, He Fangmei, went missing in Henan province, halfway across China, on October 9. What the two missing women have in common is their tenacious campaign for transparency in the government’s vaccination programs and their efforts to seek accountability.  Both women have loved ones, Ms. Hua’s daughter and Ms. He’s infant child, who suffer from debilitating illnesses from faulty vaccines. Ms. He is now 7-months pregnant. Her husband and child have also gone missing.

Even if they try, the WHO experts would have difficulties finding anybody to talk to, from whistleblowing doctors, citizen reporters, to victims’ families, or any critics of the Chinese government’s handling of the coronavirus outbreak. Chinese authorities have been busy suppressing information and penalizing dissent. Citizen journalists who went to Wuhan in the early days of the coronavirus outbreak to report from the frontlines have either gone missing or went to jail: the exact whereabouts of Fang Bin and Chen Qiushi remain unknown; Zhang Zhan was sentenced to 4 years in jail; and Chen Mei and Cai Wei, who tried to preserved censored COVID information, are still detained. Outspoken critics of President Xi Jinping for his handling of the pandemic are locked up – Ren Zhiqiang received 18 years in jail, Guo Quan and Xu Zhiyong remain in pretrial detention.

Xu Zhiyong, a well-known legal scholar, who had run for local People’s Congress elections and campaigned for abolishing extrajudicial detention and protecting migrants’ rights, is now facing a more serious change than the one he was accused of at his detention a year ago. Authorities amended the charges against Xu and lawyer Ding Jiaxi, also detained a year ago, from “inciting subversion of state power” to “subversion of state power,” which carries very heavy sentences—up to life in prison—if they are convicted. For the first time since their detention, they were allowed to meet their lawyers. Torture, they told the lawyers, was constant during their “residential surveillance” in detention facilities, respectively, in Beijing and in Yantai, Shandong province. The mistreatment, they said, included deprivation of sleep, food & water, non-stop interrogation for days and nights. Both had been imprisoned for their leading roles in the New Citizens movement.

Persecuted activists and critics of the government are unlikely to find any lawyers to defend their legal rights these days. This is simply because any lawyer who was willing to take the risks to do so has either been jailed or debarred. Across China, in Beijing, Sichuan, Henan, Shandong, and Shanghai, human rights lawyers face renewed zeal by authorities to debar them.

Coming on the heels of Beijing authorities’ suspension of lawyer Zhou Ze’s license for one year on December 21, 2020, officials revoked the license of lawyer Lu Siwei on January 15. Officials at the Sichuan Province Judicial Bureau accused lawyer Lu of “endangering national security” with his speech online. Lu now joins an ever-growing group of human rights lawyers whose licenses to practice law have been revoked or suspended by the Chinese government. Another lawyer Ren Quanniu, based in Henan province, received notification on December 31, 2020, from authorities about a hearing on January 19, which was postponed to and took place on January 29. Both Lu and Ren have represented some of the “12 Hong Kong protesters” who were captured by Chinese police at sea while trying to flee from political persecution in Hong Kong.

On January 27th, lawyer Xi Xiangdong received notification from Shandong provincial authorities of a hearing about revoking his law license, an administrative punishment for “disrupting order in a court.” Lawyer Xi has over the years represented multiple victims of rights abuses, including a family suing police for the death of a family member while in extralegal detention from torture. He also represented formerly detained human rights lawyer Wang Quanzhang. On the 29th, Shanghai judicial authorities revoked lawyer Peng Yonghe‘s license, claiming that no law firm has employed him. In truth, several law firms wanted to hire Peng but authorities warned them not to. Peng took several “sensitive” cases and represented persecuted critics of the government.

Released but Not Free: A Former POC Blocked from Leaving China

A former prisoner of conscience, who never enjoyed freedom, under constant police monitoring and subject to restrictions on his movement, after his release from a 6-year prison sentence in August 2019, began a hunger strike at the Shanghai Pudong Airport on January 28. Guo Feixiong was protesting state security officials’ order to block him from traveling to the US to be with his wife who is hospitalized and undergoing surgery and chemotherapy. By the 29th, Mr. Guo could no longer be reached. Supporters fear that police had taken him into custody.

Released political prisoners in China often face restrictions on their movement locally or are prevented from traveling abroad. January 28 marks the 700th day of Beijing lawyer Jiang Tianyong’s virtual house arrest in the remote village of his parent’s home in Henan. Since his release from a 2-year prison sentence for “inciting subversion” on February 28, 2019, Mr. Jiang has not been able leave the village without permission and policemen trailed him everywhere when he steps out of his parents’ house.

Police detained a 90-year-old woman in Shanghai, Liu Shuzhen, for expressing discontent and complaining about forced demolitions on January 19, 2020. Ms. Liu was seen being grabbed when she was holding a placard with her grievances written on it in a public park outside the City Hall and wrestled away into a police vehicle. For years, authorities harassed her but ignored her complaints about the forced demolition of her home and confiscation of her property, which developers grabbed in order to obtain the land to build the World Trade Show exhibition hall several years ago. In China, people like Ms. Liu, who insist on lodging their grievances against what they see as injustices, are referred to as “petitioners.” With faith in the right to complain written into the Chinese Constitution, hundreds of thousands of petitioners travel to provincial capitals and Beijing to seek remedies from government offices each year. Petitioners have been one of the major targets of police violence and extrajudicial detention.

On January 21, a young man from Wuhan was sentenced to two years in prison after he was convicted of “picking quarrels & provoking trouble” by a court in Nanjing. The prosecutions’ case against Jiang Tengda, 27, rested entirely on his online speech. The court found him guilty on the basis of his social media posts, which officials claimed “insulted government leaders, criticized communism, and supported Taiwan independence.”