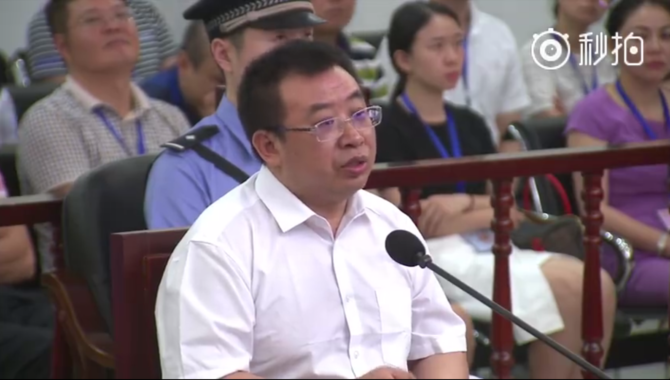 (Chinese Human Rights Defenders – November 21, 2017) China must immediately release prominent human rights lawyer Jiang Tianyong (江天勇), who received a two-year prison sentence today for defending human rights and rule of law. The Changsha Intermediate People’s Court found Jiang guilty of “inciting subversion of state power” following a sham trial in August. Jiang’s detention and unfair trial have been marked by rampant rights violations, including enforced disappearance, denied legal counsel, and attempts to undermine the presumption of innocence through a state media smear campaign against him. His conviction is the latest in Xi Jinping’s ongoing attack on rights lawyers, which has raged since the summer of 2015.

Jiang’s sentence is in reprisal for his activities as a human rights defender, including his unwavering support for individuals detained in the 709 Crackdown on rights lawyers and activists. In convicting Jiang, the court said he had used his expression in online postings and interviews with foreign media to “attack” and “vilify” the government, judicial authorities, and China’s political system. The court also cited as “evidence” of criminal behavior his attendance at trainings overseas, applications for funding from so-called “anti-China forces,” and establishing with other lawyers the association “China Safeguard Human Rights Lawyers Service Group” (中国保障人权律师服务团). The court specifically mentioned his advocacy around Zhou Shifeng and other 709 crackdown victims, claiming it “severely harmed” national security and social stability. Jiang pleaded guilty at the trial hearing held on August 22, which despite being partially broadcasted online, was essentially held behind closed doors as his supporters and international observers were denied entry into the courthouse. Supporter were also violenty blocked from attending the sentencing hearing. Jiang was represented by a government-appointed lawyer after authorities refused to let him meet with the lawyers hired by his family and then claimed he had “dismissed” them.

Jiang’s case is believed to also be partially in retaliation for his meeting with Philip Alston, the UN Special Rapporteur on extreme poverty and human rights, during Alston’s mission to China in August 2016. In Alston’s report following that visit, he specifically called for Jiang’s release and described how Chinese officials had closely monitored Alston’s access to members of China’s civil society.

It is likely that Jiang’s “confession” and guilty plea at trial had been coerced, just like those by 709 crackdown detainees Hu Shigen (胡石根), Zhou Shifeng (周世锋), and Xie Yang (谢阳). All had also been being deprived of due process rights from initial detention through trial. The UN Working Group on Arbitrary Detention declared in August that, “conditions… strongly suggest that [Hu, Zhou and Xie’s] ‘confessions’ involved coercion, including psychological pressure and, possibly, torture.” Hu and Zhou are currently serving long sentences following their 2016 trials, while Xie was released after his trial in May 2017, but is now living under tight police control.

Revelations of torture and other ill-treatment in the above cases have stoked fears that other lawyers tied to the crackdown are being similarly abused. In particular, lawyer Wang Quanzhang (王全璋) has been held incommunicado since being seized in August 2015, and nothing is known of his conditions since that time. More recently, lawyer Li Yulan (李昱函), who had defended then-detained lawyer Wang Yu (王宇), was taken into custody in October and formally arrested on November 15. In Li’s case, it is feared that her health, already fragile due to heart disease, may only worsen in detention.

Jiang Tianyong disappeared on November 21, 2016, at the Changsha South Train Station in Hunan Province, where he had intended to board a train to Beijing. His fate and whereabouts were unknown for 25 days, until state media confirmed that he had been detained. Jiang remained forcibly disappeared until May 2017, however, as police held him under “residential surveillance at a designated location.” While Jiang was held incommunicado, state media launched reports in early March 2017, claiming that he had “fabricated” stories of lawyer Xie Yang’s alleged torture, and broadcasted clips of an interview with Jiang. His family-hired lawyer, Chen Jinxue (陈进学) and, later, lawyer Zhang Lei (张磊), were repeatedly denied visits to meet with Jiang. Police would not permit visits on the grounds that such contact would “endanger national security,” “hinder the investigation,” or “leak state secrets,” even after state media had been allowed to meet Jiang. After formally arresting Jiang on May 31, 2017, authorities claimed that Jiang had “fired” his family-hired lawyers and had engaged a government-appointed lawyer. Jiang was then indicted in July.

For many years, Jiang Tianyong had been subjected to torture, arbitrary detention, and forced disappearance in retaliation for his rights-defense work. He was disbarred in 2009 due to defending or supporting high-profile rights defenders, including lawyer Gao Zhisheng (高智晟) and legal advocate Chen Guangcheng (陈光诚). Since then, Jiang had taken an active role in organizing Chinese human rights lawyers to provide legal counsel to victims of abuses and criticized authorities’ abuses of legal rights. Jiang was detained in March 2014 after he and three other lawyers went to investigate a “black jail” in Jiansanjiang City in Heilongjiang; at that time, Jiang was beaten in police custody and suffered eight broken ribs. In May 2012, police seized Jiang when he was on his way to visit Chen Guangcheng in a hospital, and beat Jiang so badly that he suffered hearing loss. In addition, police forcibly disappeared Jiang for two months in the spring of 2011, following online calls in China to hold “Jasmine Rallies” as pro-democracy movements spread across the Middle East and North Africa.