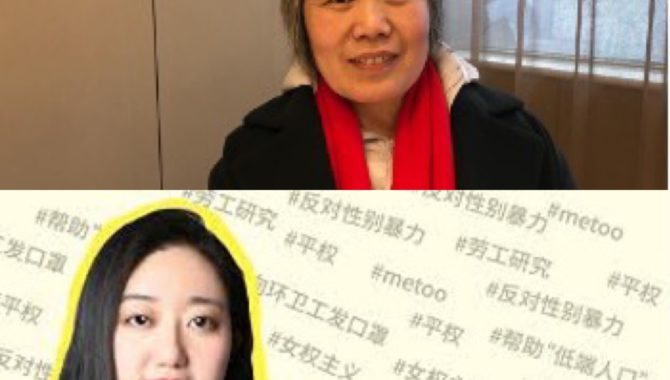 (Chinese Human Rights Defenders—March 12, 2021) Human rights defenders Li Yufeng and Li Qiaochu are recipients of the seventh Cao Shunli Memorial Award for Human Rights Defenders. The decision to give this year’s award to both Ms. Li Yufeng and Ms. Li Qiaochu recognizes their long-standing civil society activism to promote protection of human rights in China. Both recipients are currently detained in China for their human rights activism.

The annual award is announced prior to March 14, 2021, which marks the seventh anniversary of Cao Shunli (曹顺利)’s death in police custody in Beijing. March 14 is the date designated as “Human Rights Defenders Day” by rights activists in China. Several Chinese human rights organizations established the award in 2014 to honor the memory of Cao Shunli, her life, and her work. The award has been given to those who carry on Cao Shunli’s legacy of grassroots human rights advocacy despite the threats from government reprisals, who promote human rights and made great efforts to hold the government accountable for its rights violations. The award includes prize money to support ongoing initiatives and assist the recipients to recuperate from reprisals.

Cao Shunli died on March 14, 2014, after police denied her adequate medical treatment. Police detained Cao Shunli to prevent her from attending a session of the UN Human Rights Council and an international human rights training in Geneva. Last year on the fifth anniversary of Cao Shunli’s death, several UN independent human rights experts renewed their call for an independent investigation. In calling for justice for Cao, the experts said, “Cao Shunli’s case is emblematic of the struggle that many human rights defenders in China face.” Chinese President Xi Jinping has repeatedly underlined China’s efforts to “safeguard the international system with the UN at its core” and yet the tragic death of Cao Shunli highlights the extraordinary lengths the Chinese government has gone into to stop its own citizens from freely cooperating with the UN human rights operations.

Li Yufeng, 63, human rights defender, is currently detained by the Chinese government for her rights advocacy.  Li began petitioning in the early 2000s, seeking legal accountability for the forced eviction and demolition of her home by government backed developers. The obstacles she encountered and the punishments she experienced over the years led her to join and support actions with other victims and activists to seek justice. Li actively campaigned for the abolition of “re-education through labor”, a  now-defunct system of administrative detention. Li has annually memorialized the victims of the 1989 Tiananmen Massacre.

Li Yufeng was seized by police in October 2015 and criminally detained on suspicion of “gathering a crowd to disrupt order of a public place” and subsequently arrested in a clear act of reprisal for her human rights advocacy work. Li was tried in closed-door proceedings and sentenced to 4-year in January 2017. Li was released in February 2019. But soon after, in July 2019, police detained Li again at Jiaozuo Detention Center in Henan Province to punish her for carrying on rights advocacy.

Li Qiaochu, 30, has long been a human rights advocate against gender-based violence, an advocate for labour rights, and for the building of civil society more broadly. Ms. Li graduated from Renmin University, and earned a master’s degree in public policy from the University of York in England in 2015. She went back to China to work as a research assistant at Tsinghua University.

Li Qiaochu is currently detained at the Linyi City Detention Center in Shandong, after police took her into custody on February 6, 2021. Li Qiaochu had posted many tweets to expose details of torture of detained legal advocate Xu Zhiyong and lawyer Ding Jiaxi. Li Qiaochu is likely targeted in retaliation for her engagement with UN human rights mechanisms.

In 2017, Li Qiaochu volunteered to provide information and resources to affected migrant workers when Beijing authorities forcibly removed them from the city. Li increased visibility of China’s #MeToo movement by compiling data on sexual harassment, garnered greater publicity to combat the exploitative “966” work culture. Li sought to support family members of China’s detained and persecuted prisoners of conscience by speaking out publicly about their plight. When COVID-19 broke out, she participated in online efforts to provide much-needed PPE to sanitation workers in Beijing. On 31 December 2019, Li was summoned by police, and she was subsequently held incommunicado from 16 February 2020 to 19 June 2020.

The Cao Shunli Memorial Award acknowledges the efforts of human rights defenders in China who have demonstrated a deep commitment to promoting human rights, typically in the face of great personal risk. The award has been announced annually on March 14, the anniversary of Cao’s death. In 2015, disability and labor rights activist Zhou Weilin (周维林) was the first recipient of the award. Housing rights activist Jia Lingmin (贾灵敏) received the award in 2016. Women’s and housing rights activist Su Changlan (苏昌兰) won the award in 2017. In 2018, human rights activists Chen Jianfang (陈建芳) and Li Xiaoling (李小玲) were the co-recipients of the award. Barefoot lawyer Ji Sizun (纪斯尊) received the 2019 award months before he died due to torture in a police-guarded hospital bed. The award went to two human rights defenders, Zhang Jianping (张建平) and Wang Heying (王和英) in 2020.