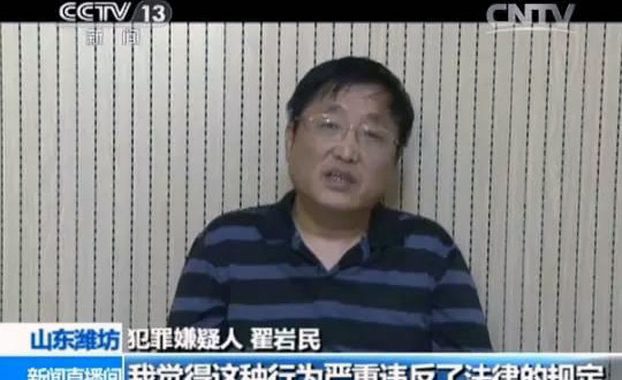 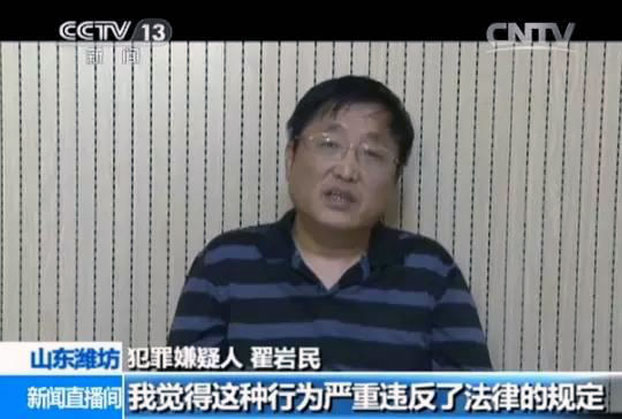 Beijing-based activist Zhai Yanmin was detained in connection with the “709 Crackdown” on human rights lawyers. Police initially criminally detained Zhai and at least 16 others on June 15, 2015, on suspicion of “gathering a crowd to disrupt order of a public place” and “picking quarrels and provoking trouble.” Most had been detained the day after they held a protest outside the Weifang City People’s Court in Shandong during the trial of Xu Yonghe (徐永和), a civil servant that the protestors said had been wrongfully accused of “corruption.” Zhai was picked up in Beijing, where he was detained before being moved to Weifang City.

Police released 12 individuals on bail after a month in detention, but Zhai, Ms. Zhang Weihong (张卫红, also known as Zhang Wanhe 张皖荷), Liu Xing (刘星), Li Yanjun (李燕军), Ms.Yao Jianqing (姚建清) remained in custody. Weifang police recommended the group be indicted in October 2015, but the case was then transferred to Guangrao County prosecutors, who sent it back for further investigation for the second time on April 11, 2016. Between March and May 2016, the four (except Zhai) met their lawyers for the first time at Weifang City Detention Center. The group’s lawyers were informed on August 18, 2016 that the four had been indicted and their cases transfered to Guangrao County People’s Court in Shandong Province. However, on an unknown date, Zhai’s case was transferred to Tianjin, where police formally arrested him in January 2016 on suspicion of “subversion of state power.”

Zhai’s detention is connected to the police operation against Beijing Fengrui Law Firm, the main target of the 709 Crackdown. On June 21, 2015, state media accused the group detained in Weifang as being “paid” to protest in order to influence court decisions, and named Zhai as the organizer of the group. Days after police raids began targeting human rights lawyers, state media released articles denouncing Fengrui as a “criminal gang” and tied Zhai Yanmin to the firm’s alleged crimes, claiming he had “confessed” and broadcasting video clips of him supposedly admitting to criminal activity.

Zhai’s wife did not receive the arrest notification at the time of his formal arrest, and it only became clear in April 2016 that Zhai was being held at Tianjin No. 2 Detention Center. In February 2016, authorities claimed that Zhai “dismissed” his family-appointed lawyer, Ge Wenxiu (葛文秀), and “hired” new lawyers. This was part of a trend: at least 10 others detained in the 709 crackdown also allegedly “fired” their defense counsel. However, authorities have not allowed Ge to confirm any decision that Zhai may have made. Instead, they have refused to allow the lawyer to meet with Zhai and not produced written confirmation of such a decision, in violation of local regulations.

The Tianjin No. 2 People’s Procuratorate indicted Zhai for “subversion,” and his case was sent to Tianjin No. 2 Intermediate People’s Court, according to a post on the local procuratorate’s account dated July 15, 2016. Authorities tried Zhai on August 2, 2016 without giving the legally required three days notice to his family. His wife Liu Ermin (刘二敏) was detained by police on July 31 after she tried to confirm rumours that the trial was to be held on August 1. Police prevented her from leaving her home on August 2 to attend the trial. From the selected court transcript released, authorities accused Zhai of working with activist Hu Shigen (胡石根) on advocacy campaigns around “politically-sensitive” cases. It claimed that lawyer Zhou Shifeng (周世锋) used the Beijing Fengrui Law Firm as a platform to launch these activities, and that lawyer Li Heping (李和平) used money from an overseas NGO to fund such activities. The accusation said Zhai led petitioners in these activities and Hu led a religious group, which Gou Hongguo was a part of. Zhai was charged with meeting with Hu Shigen, Zhou Shifeng, Li Heping, and 15 others at a restaurant in Beijing on February 1, 2015, to organize such activities, a meeting that public security officers had managed to record.

Following his release on a suspended sentence in August 2016, Zhai and his family have been subjected to a number of controls. He is not allowed to travel, freely meet with friends, or give interviews. Zhai reportedly has been forced to wear an electronic tracking device, and at times have had police escort him to locations outside his home. He has reportedly been working as a taxi driver to make a living. On May 1, 2017, Zhai’s wife Liu Ermin (刘二敏) released a statement that said Beijing national security officers had questioned her husband for four hours after she traveled to Changsha to try and attend Xie Yang (谢阳)‘s aborted trial on April 25, 2017. The officers reportedly threatened Zhai that she would be detained.

In January 2018, Zhai reportedly had a stroke, causing him to lose his ability to speak, which his family attributes to the sustained abuse he faced in detention, particularly the forced consumption for over a year of unknown medication. In addition, Zhai remained very withdrawn and thin compared to before his detention.

Zhai, born on May 11, 1961, participated in the 1989 pro-democracy protests as a student. A Beijing-based activist, he has been involved in several human rights campaigns, including with the New Citizens’ Movement. Since 2014, Zhai has been detained several times on suspicion of “picking quarrels and provoking troubles” for protesting in support of detained human rights defenders. He was also briefly detained in October 2014 for supporting the Occupy Hong Kong democracy protests.