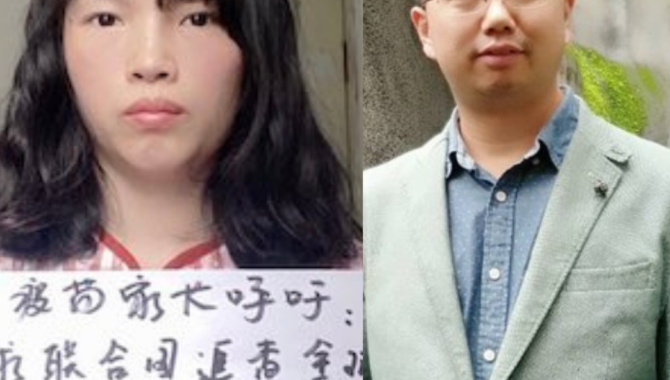 (Chinese Human Rights Defenders—March 14, 2022) Human rights defenders He Fangmei and Chang Weiping are recipients of the eighth Cao Shunli Memorial Award for Human Rights Defenders. The decision to give this year’s award to both Ms. He Fangmei and Mr. Chang Weiping recognizes their long-standing civil society activism to promote protection of human rights in China. Both recipients are currently in police custody in China for their work promoting and protecting human rights.

The annual award is announced prior to March 14, 2022, which marks the eighth anniversary of Cao Shunli (曹顺利)’s death in police custody in Beijing. March 14 is the date designated as “Human Rights Defenders Day” by rights activists in China. Several Chinese human rights organizations established the award in 2014 to honor the memory of Cao Shunli, her life, and her work. The award has been given to those who carry on Cao Shunli’s legacy of grassroots human rights advocacy despite the threats from government reprisals, who promote human rights and made great efforts to hold the government accountable for its rights violations. The award includes prize money to support ongoing initiatives and assist the recipients with recuperating from reprisals.

Cao Shunli died on March 14, 2014, after police denied her adequate medical treatment. Police detained Cao Shunli to prevent her from attending a session of the UN Human Rights Council and an international human rights training in Geneva. Last year on the fifth anniversary of Cao Shunli’s death, several UN independent human rights experts renewed their call for an independent investigation. In calling for justice for Cao, the experts said, “Cao Shunli’s case is emblematic of the struggle that many human rights defenders in China face.” Chinese President Xi Jinping has repeatedly underlined China’s efforts to “safeguard the international system with the UN at its core,” and yet the tragic death of Cao Shunli highlights the extraordinary lengths to which the Chinese government has gone to stop its own citizens from freely cooperating with UN human rights mechanisms.

He Fangmei (何方美) is a courageous defender of health rights based in Henan province who has been held incommunicado without any charge by authorities for more than a year.

He Fangmei became a leading voice for the parents of hundreds of children sickened and disabled by defective vaccines in 2018 after her own daughter was hospitalized for a spinal cord infection. She led advocacy campaigns for the adoption of a vaccine safety law, public disclosure of government information about vaccine safety, and state compensation for victims of faulty vaccines. From the start of their campaigning in 2018, police across China have harassed, detained, beaten, and forcibly disappeared these health rights campaigners. Despite being targeted by the police, He persisted in raising awareness of the issue on social media.

Police from He Fangmei’s hometown of Xinxiang in Henan province often trailed her when she went to Beijing, including at the hospital where her daughter continued to be treated for complications arising from the faulty vaccine. They seized her on one such trip in March 2019 after she led a demonstration of over two dozen parents-advocates before the National Health Commission, and criminally detained her after forcibly returning her to Xinxiang. Her arrest was one of several around the time of the 40th Session of the UN Human Rights Council in March, which included scrutiny of China’s rights record under the Universal Periodic Review. On January 10, 2020, the Huixian County prosecutors dropped the charges against her and she was released.

Upon her release, He Fangmei immediately resumed her activism despite the increased political sensitivity of drawing public awareness to the government’s record of approving unsafe vaccines just as the COVID-19 epidemic was breaking out across China. She was seized once more by the police on October 9, 2020 after she held a one-person protest against unsafe vaccines at a government building in Henan. By October 14, she had reportedly been placed under house arrest at an unknown government-designated location. Soon afterward, her children and husband also vanished into police custody in China. Authorities have not released any information about their circumstances for more than a year. At the time of her detention, she was seven months pregnant.

Chang Weiping (常玮平) is a brave and dedicated human rights lawyer from Shaanxi province. He has taken on notable cases defending the rights of a wide range of marginalized groups, which demonstrate the breadth of his commitment to protecting human rights and respecting human dignity in China. His clients have included women, LGBTQ persons, those with HIV/AIDS and hepatitis B facing workplace discrimination, as well as victims of forced residential demolition, defective vaccines, and repression for practicing Falun Gong. He has been held in detention without trial for more than a year after speaking out publicly about torture he suffered while being forcibly disappeared by authorities in January 2020.

Chang Weiping’s current detention began in October 2020 after he posted a YouTube video  describing how state officials disappeared and tortured him earlier that January. He was again forcibly disappeared by authorities in the city of Baoji in the northwestern province of Shaanxi. After nearly six months of enforced disappearance, Chang was formally arrested for “inciting subversion of state authority” in April 2021, whereupon he was transferred to a remote detention center on the outskirts of Baoji.

When Chang Weiping was allowed a rare visit by his defense lawyers in September 2021, he reported serious abuse while he was disappeared. He said that authorities interrogated him for long periods of time while depriving him of sleep, food, and water and subjecting him to other forms of mental and physical abuse, including locking him to a “tiger chair”—a chair with shackles for immobilizing the hands and feet—for up to six days. The authorities’ use of torture to extract confession has led to serious health problems for Chang, for which authorities have denied medical treatment despite repeated requests from his wife.

In the video statement he made before being detained, Chang Weiping said about the work he was doing with his fellow human rights defenders: “All of what we did was small and incremental. But I am very proud to say that I believed we were helping to make society better, or that we were fulfilling the obligations that we had as citizens toward our fellow compatriots and to society.”

The Cao Shunli Memorial Award acknowledges the efforts of all human rights defenders in China who have demonstrated a deep commitment to promoting human rights, typically in the face of great personal risk. The award has been announced annually on March 14, the anniversary of Cao’s death. In 2015, disability and labor rights activist Zhou Weilin (周维林) was the first recipient of the award. Housing rights activist Jia Lingmin (贾灵敏) received the award in 2016. Women’s and housing rights activist Su Changlan (苏昌兰) won the award in 2017. In 2018, human rights activists Chen Jianfang (陈建芳) and Li Xiaoling (李小玲) were the co-recipients of the award. Barefoot lawyer Ji Sizun (纪斯尊) received the 2019 award months before he died due to torture in a police-guarded hospital bed. The award went to two human rights defenders, Zhang Jianping (张建平) and Wang Heying (王和英) in 2020, and Li Yufeng (李玉凤) and Li Qiaochu (李翘楚) in 2021.